Streaming service subscriptions are surging after the COVID pandemic forced Australians to explore new entertainment options, according to the latest research by technology analyst firm Telsyte.

The Telsyte Australian Subscription Entertainment Study 2021 found SVOD (subscription video on demand) streaming music and games-related subscriptions had all experienced strong growth year on year at 16 percent, 13 per cent and 30 per cent respectively.

This is being driven by the demand for home entertainment and the general acceptance of subscription services.

Most Australian households (78 per cent) have at least one entertainment subscription, that’s an increase from 65 per cent three years earlier.

Subscribing households now have on average 4.3 entertainment services which are largely made up of SVOD subscriptions – that’s up from 2.7 services in June 2018.

At this pace, Telsyte forecasts a strong future for consumer subscription services and not just for entertainment.

It’s estimated entertainment subscription services will exceed 60 million by 2025 with the games subscription category expected to see the fastest increase in coming years bringing it close to the levels we see today with music and SVOD.

At the same time, Foxtel’s Pay TV segment is being put under pressure thanks to the increasing adoption of affordable SVOD.

The Pay TV market declined by 2 per cent to 2.5 million in June 2021 while Foxtel’s Pay TV base declined by 4 per cent during the same period. Meanwhile Fetch managed to remain stable.

With cinema closed during lockdown and video content production disrupted, this has left Australians hungry for fresh content which is another factor behind them taking up multiple services. 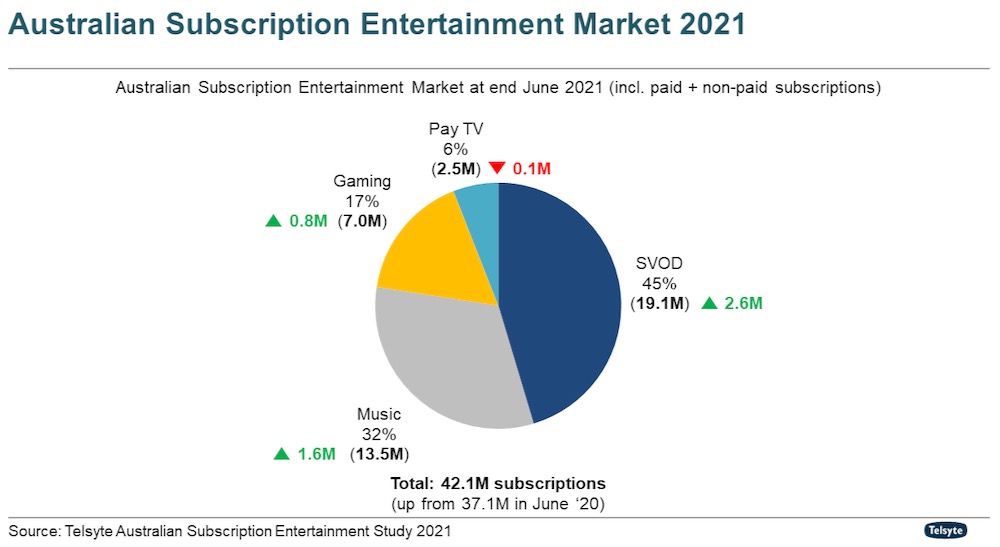 Australian subscription video on demand services hit 19.1 million by the end of June 2021 – that’s an increase of 16 per cent from June 2020.

SVOD services are now considered an essential service according to 57 per cent of users – an increase from 52 per cent a year ago.

The study found Netflix is by far the top SVOD service with six million customers to the end of June 2021.

There is a group of 4.1 million Australians who subscribe to one of the more than 30 SVOD services available including Binge, Apple TV+, Hayu, Paramount+, Optus Sport and Britbox. 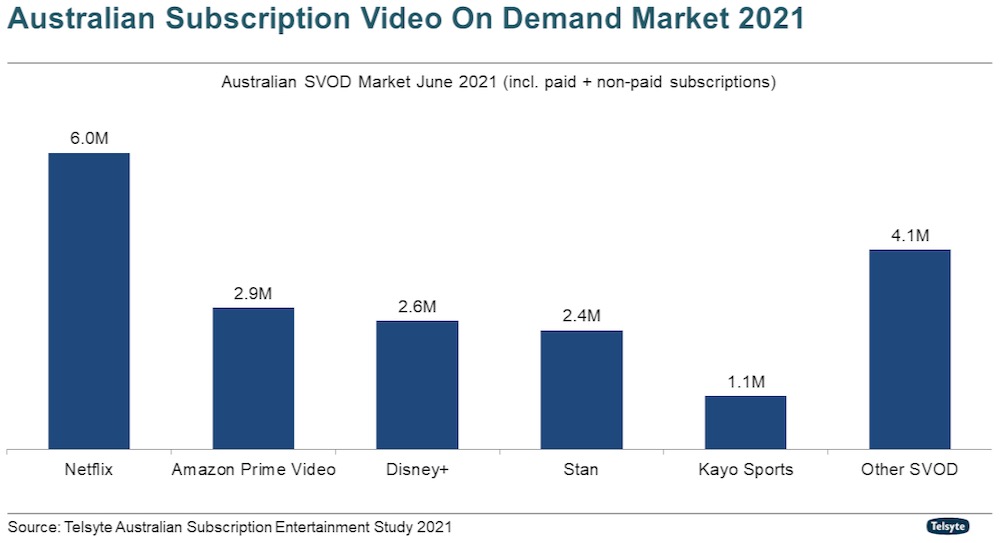 Interestingly, the study found nearly half (46 per cent) of SOVD users were in favour of a one stop platform.

Video gaming subscriptions are projected to grow three times faster than SVOD and streaming music in the next four years.

The Telsyte study found Australians had taken up a total of seven million game-related subscriptions at the end of June 2021, that’s up 13 per cent from 6.2 million last year.

The total of game-related subscriptions could more than double to more than 16 million by June 2025.

The same research also revealed that a quarter of gamers are interested in cloud gaming, often referred to as streaming gaming which works like SVOD services where the games are stored and run online without having to install the game on their platform or console or need any specific hardware.

Streaming music is still growing steadily with the total number of streaming music subscriptions hitting 13.5 million at June 2021, that’s an increase of 13 per cent from a year ago.

The study found that one in four Australians aged 16 and over listened to podcasts in 2021 with comedy, news and politics the most popular podcast genres.

How to Prepare for Your First Job After Graduation