Foxtel has made a decision about whether to pursue legal action against two individuals who illegally streamed the Anthony Mundine-Danny Green pay-per-view fight on Facebook Live.

Both people, Darren Sharpe and Brett Hevers, were contacted by Foxtel while they were streaming the Main Event fight on February 3 to make them aware they were breaching Copyright Law.

Because of their actions, more than 150,000 people were able to watch the fight, which was priced at $59.95 on the Main Event channel, for free and potentially cost Foxtel millions of dollars.

Foxtel contacted Clarke and Hevers again and asked them to post apologies on their Facebook pages. Both have complied with this request  with almost identical posts there were obviously scripted by Foxtel.

The company has also made the decision of not pursuing legal action despite the obvious and widespread piracy.

“Foxtel has been in touch with Mr. Sharpe and Mr Hevers following last weekend’s illegal Facebook live stream of the Mundine vs. Green match and we’ve expressed our great disappointment with their unlawful activities,” Foxtel CEO Peter Tonagh said.

“Rather than taking legal action, we decided to take the opportunity to educate both of them about the significant harm such actions bring to the production of local Australian content, including live sports.

“We have given the individuals the opportunity to formally apologise via a public social media post, acknowledging the gravity of the situation, in the hopes that more people will learn that copyright theft is not a victimless crime and something that should be taken very seriously. 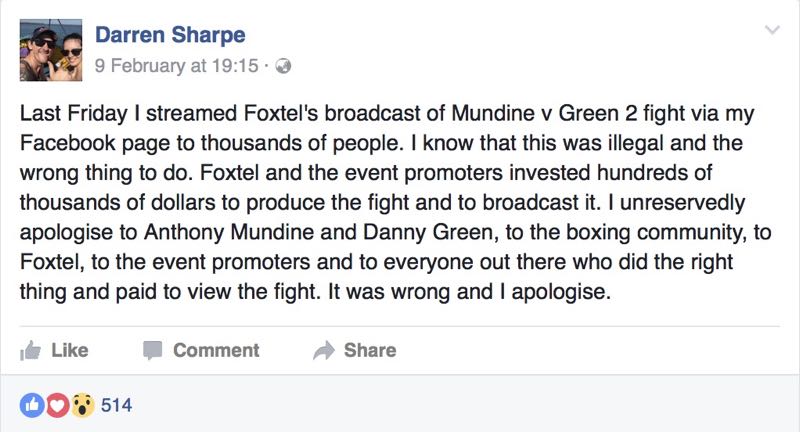 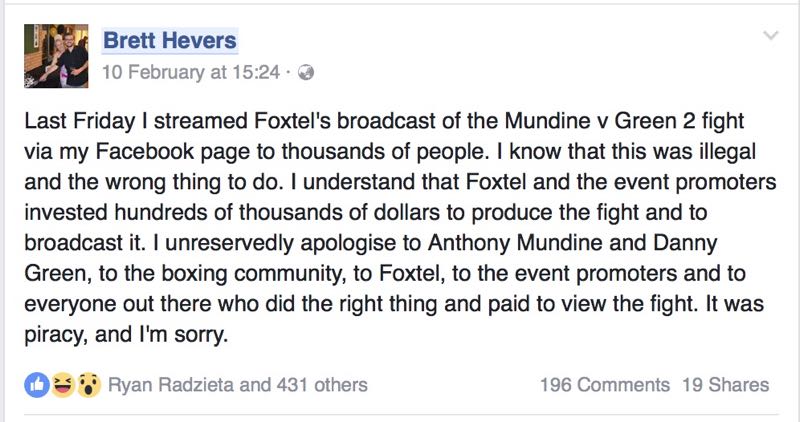 “We are pleased that both Mr Sharpe and Mr Hevers have taken us up on the opportunity and have published an apology and acknowledgment of wrongdoing on their Facebook pages.

“Illegal streaming and file sharing of any kind impacts the viability of the entire content industry, and threatens the livelihoods of the thousands of people employed by it, including athletes, actors, technicians, editors, caterers, set designers and many others.

“In addition, if revenue opportunities are undermined sports fans will suffer as sports presenters and promoters will have difficulty affording the costs of staging these fights and other events.”