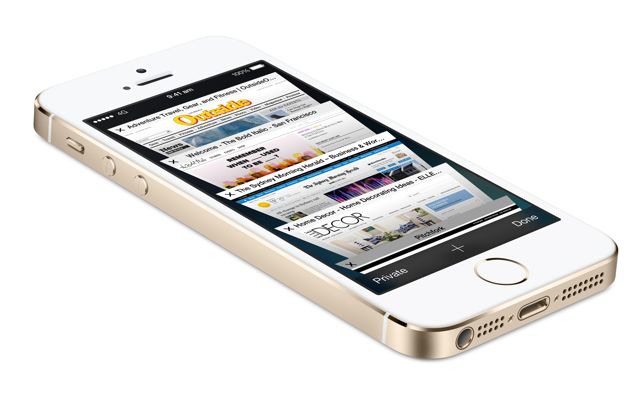 The iPhone 5S might not have a brand new design but it’s what’s on the inside that counts – and that’s where you’ll find nearly all of the latest enhancements.

Apple redesigns the iPhone every second year and this is that second year but when you get the iPhone 5S in your hands there is still a definite sense of newness to it.

There are new colours, a new home button with a fingerprint reader underneath, a better camera and, of course, iOS 7 which has changed the iPhone experience.

The iPhone 5S went on sale today along with the iPhone 5C – a cheaper model that’s available in a number of colours.

It is the first time Apple has released two new iPhones in the same year.

The iPhone 5S also has a new gold colour variation and the older black and white models are now called space grey and silver respectively.

Below the surface is the new speedier A7 processor, an M7 motion sensor for hyper accurate readings and 64-bit mobile architecture for desktop computer performance.

But the standout new feature of this iPhone 5S review is the Touch ID fingerprint reader which is – where else – on the home button beneath a laser-cut sapphire crystal.

And it works remarkably well. When you hold your finger on the home button for a second – your locked iPhone is now unlocked.

Might not sound like a breakthrough but there is a surprising number of people who don’t have a lock code because it’s too much trouble. With Touch ID that trouble no longer exists.

And it’s a breeze to set up. IT took less than a minute.

Each time you press your finger to the home button it gets a better reading of your fingerprint. Users can set up Touch ID for up to five fingers.

There’s still a passcode back up if for some reason the Touch ID can’t recognise your fingerprint. This hasn’t happened yet for us since we started our iPhone 5S review.

Your fingerprint can also authorise purchases on iTunes, the App Store and the iBookstore.

Hopefully Apple has plans to allow developers access to the technology to create a whole new class of apps.

And, with the smartphone becoming our mobile wallets, it would also be a secure way to make payments in retail stores as well.

The Touch ID fingerprint feature is going to drag biometrics into the mainstream.

If you wanted a dabble on the stock market, Tech Guide’s tip is that biometric companies are going to get a lot more attention than usual from now on.

The iPhone is used to take more photos than any other mobile device so it made sense Apple improved its already impressive camera even more.

And it didn’t do that by just adding more megapixels – it’s still 8MP – but by improving the image sensor to capture even larger and sharper pixels.

Aperture has also been increased to f/2.2 which means it has 33 per cent greater sensitivity to light for brighter images even in low light conditions.

But surprisingly what also improves your images is the new True Tone flash. The iPhone 5S’s True Tone flash is actually actually has two flashes – a traditional white flash and a secondary amber flash.

The iPhone 5S can sense how much flash your picture requires and fires each flash with enough intensity to keep the colours clear and accurate.

No more washed out pictures and odd flesh colours which were the result of the wrong colour temperature from a single flash.

Other new tricks with the new camera is Burst mode – a feature that is already available on rival smartphones – but good to see it included with the iPhone 5S.

Slo Mo is another favourite. Users can shoot up to 120 frames per second at 720p and then go back and select the part of their video that will go in and out of slow motion. Easy to do and a lot of fun so expect a rush of these videos to hit YouTube.

A list of the new feature you will find with iOS 7 can be seen here.

Even though the iPhone 5S looks almost identical to the iPhone 5, iOS 7 will give the device a whole new look and character.

There is an all-new design and a host of new features including Control Centre that gives direct access to settings like wi-fi, Bluetooth and Airplane Mode simply by sweeping up from the bottom of the screen.

Siri has also had a makeover with the choice of a male or female voice and with new skills like looking up tweets from people you follow and opening apps by naming them.

The battery on the iPhone 5 has come in for a bit of criticism from some users and the good news is that Apple has managed to improve battery performance by putting less of a strain on it.

It does this with the faster and more efficient A7 and M7 processors so users can expect about a 20 per cent improvement in battery life.

With the iPhone 5S Apple has taken an already excellent smartphone and made it noticeably better.

That’s quite an achievement in this competitive smartphone market.

The device still exudes quality and workmanship and has that unmistakable Apple attention to detail.

We would have loved to see a larger screen on the iPhone 5S – it is still a lot smaller than its highly fancied competitors – but it is still backed up by the biggest and strongest line-up of apps in the world.

The iPhone 5S might look similar to the iPhone 5 but it absolutely proves that beauty is a lot further than skin deep.