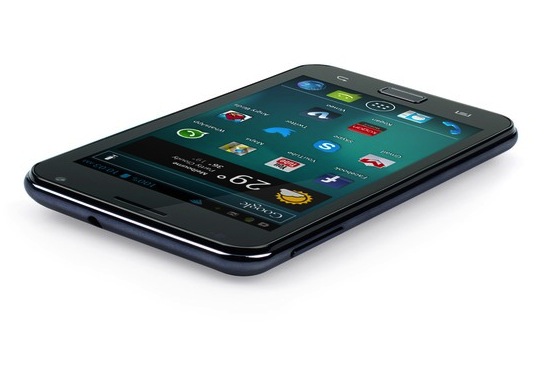 Kogan has entered the mobile market with the Agora Android smartphone that offers both value and a range of feature including the ability to run two SIM cards.

Priced at $149, the Agora has a 5-inch screen, a dual-core 1Ghz processor, 4GB of internal storage and a microSD card slot.

The device can also take two SIM cards so it’s possible to operate two separate numbers on the device.

This feature would be attractive to users with a work and personal number who would usually require two handsets. With the Kogan Agora they could both be used on one device.

There is a generous frame around the screen with a home button beneath and a 0.3-megapixel front facing camera in the top right corner.

The top edge has a headphone jack while the right edge has the on/off/lock key, the left has the volume up and down control and the bottom has the microUSB sync/charge port.

The back is remarkable similar – almost identical in fact – to the back panel of the original Samsung Galaxy Note right down to the shape and texture of the back cover.

Also on the back panel is the Agora’s 5-megapixel camera and LED flash.

The device is about the same length as a regular 5-inch smartphone but is slightly wider than similar models yet doesn’t feel too big in your hand.

The standout feature as far as we’re concerned is the dual SIM card slot. It’s handy for those users who have two numbers and have been forced to carry two devices around.

And if you are running two SIMs it’s also possible to label each to make them easier to identify like “work” and “personal”, for example.

But the device still works perfectly well even if you use one of the SIM card slots.

And being an unlocked device you can run a Telstra, Vodafone or Optus SIMs in any combination and still receive calls.

The device is 3G and 2G only so don’t expect the network speed of 4G with the Agora smartphone.

Only one of the SIM card slots can handle 3G connectivity while the other is restricted to 2G.

The 3G SIM can easily handle data while the 2G SIM is sufficient for calls and texts.

And when you receive a call the Agora clearly identifies which SIM card it is coming in on. It’s also possible to receive a second call on the other SIM and even switch between calls.

For a $149 smartphone the Kogan Agora really performs above its class with a reasonably fast dual-core 1Ghz processor.

Navigating the device is pretty zippy and it’s fast to scroll between screens and in and out of apps.

The built-in camera is adequate for capturing decent quality images and 720p video which is good enough to share but lacks the quality of cameras seen in more expensive models.

The Agora is powered by the Android 4.0.4 operating system (Ice Cream Sandwich) so while it’s not the latest software, it still works quite well.

The generous 5-inch display offers plenty of room to enjoy Google Play Store apps and your own content.

Speaking of the LED screen, it has a 480 x 800 resolution with 186ppi (pixels per inch) – not in the same league as other far more expensive devices – but still sharp enough to easily read even small web text and appreciate your pictures.

If you’re after an AMOLED screen that’s sharp enough to cut your finger and a greater pixel density, then the Agora is not the smartphone for you.

But if you’re after a value Android device that has an impressive list of specs and features, then you could do a lot worse than the Kogan device.

The onboard 2000mAh battery is enough to easily power you through an entire day but we found having two SIM cards with both connecting to different networks taxed the battery a little more and got us through to the late afternoon.

In terms of value there isn’t a smartphone on the market that can compare pound for pound to the Kogan Agora.

With the popularity of the value of mobile SIM only plans, including Kogan’s very own pre-paid plans, that require users to bring their own smartphone to the table, the Agora only adds to the overall value proposition.

The addition of being able to run two SIM cards on the device is just an added bonus to the cheap but impressive device.