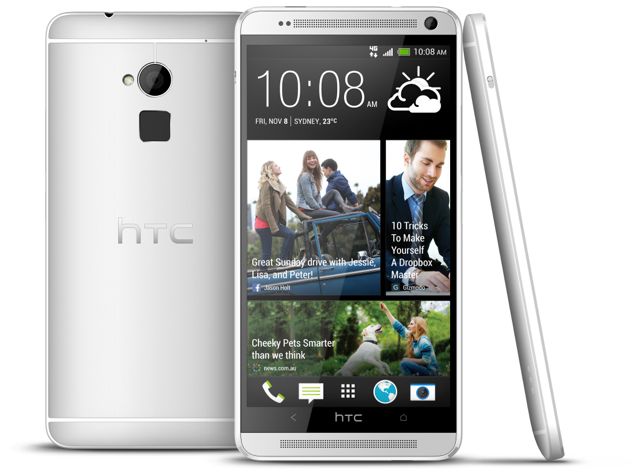 The popular HTC One smartphone has been supersized with a huge 5.9-inch screen and a new fingerprint reader for added security.

The HTC One Max takes most of the features users loved with the HTC One and throws in some new ones along with a display that’s hard to miss.

The HTC One Max is basically the HTC One on steroids with a similar look and feel – just bigger. It is 16.4cm long, 8.25cm wide and just over 1cm thick.

In fact it’s probably closer in styling to the HTC One Mini with a white band around a metal unibody.

One thing the HTC One Max has that the other devices don’t is a removable back panel to allow for the insertion of the SIM card and a microSD card.

But we had a problem with our review unit after we detached the back panel – no matter how hard we tried it never fit flush on the back of the device again.

The top right corner of the panel – as hard as we tried – refused to clip back into place.

It is certainly a let down in workmanship especially after HTC talked up the device’s craftsmanship and attention to detail.

We had to put on the included snap-on case to avoid that rogue corner catching on our clothes when we slipped it into our pocket.

No such problem with the front of the device with that full high definition 5.9-inch screen and front-facing speakers that sound even better than those on the HTC One.

On the rear panel is the Ultra Pixel camera and the fingerprint scanner.

The fingerprint scanner follows up on what Apple did with the iPhone 5S and its Touch ID sensor.

But, unlike Apple’s fingerprint reader, the HTC fingerprint scanner was very temperamental and required a few swipes of our finger to work.

Half the time the scanner flaked and we had to enter our password to unlock the HTC One Max. This was very frustrating when we wanted to access the device quickly.

When the scanner did work we were able to assign apps to open at the same time the phone was unlocked.

Users can register up to three fingers with the scanner – and they don’t have to be your own fingers. One scenario would be for your child to be able unlock the device with his or her finger.

And what this can trigger is the opening of a special play zone on the device for the kids to explore without disturbing any of your content.

With a device of this size, content is what you can really enjoy. It’s definitely aimed at those who prefer to consume content more than creating it.

And that’s one of the main reasons why there’s a microSD card slot on the HTC Max One so you can add up to an extra 64GB of storage – plenty of room for music, movies and images to enjoy on the device.

With the camera, there is no megapixel measurement but rather the UltraPixel description.

Pixel size is what makes up image quality rather than just the sheer number of them.

And by having these larger pixels means it is more light sensitive than its 13-megapixel competitors.

Apple has taken a similar approach with its 8-megapixel iPhone 5S camera that can easily hold its own against other higher megapixel cameras.

With the HTC One Max the result is being able to take quite respectable images.

The camera also has additional features like creating a highlight reel of your images to music, dual capture so the photographer can get into the picture and videos as well as a GIF creator.

This sits over the top of the regular Android operating system and offers some nice touches, the best being BlinkFeed.

Now the streams of these social feeds are right there on your home screen so it’s no effort to see what’s happening on those respective networks.

Under the hood the HTC One Max has it where it counts with a Qualcomm Snapdragon 600 quad core processor so you know it’s going to be fast. And it is.

Also onboard is 16GB of memory which can be expanded with a microSD card by up to 64GB along with cloud storage.

The advantage of having a large device is that it can fit a large battery inside. In the HTC One Max’s case that battery has a capacity of 3300mAh.

For our testing we easily got a day and half out of the battery. That will be great news for power users who aren’t going to be left stranded with a dead device in the late afternoon.

The HTC One Max is a lot of phone with a large screen – it won’t suit everyone but those willing to carry around a device of this size will have lots of benefits.

When compared to similar large-screen smartphones like the Sony Xperia Z Ultra and the Samsung Galaxy Note 3 we feel the HTC One Max comes up a little short in a few areas.

But that’s not to say the device won’t appeal to a wide range of users.

The HTC One Max is an advanced all-rounder that offers an excellent screen and features that are sure to attract loyal HTC customers and anyone else who wants to take the leap into a larger world.