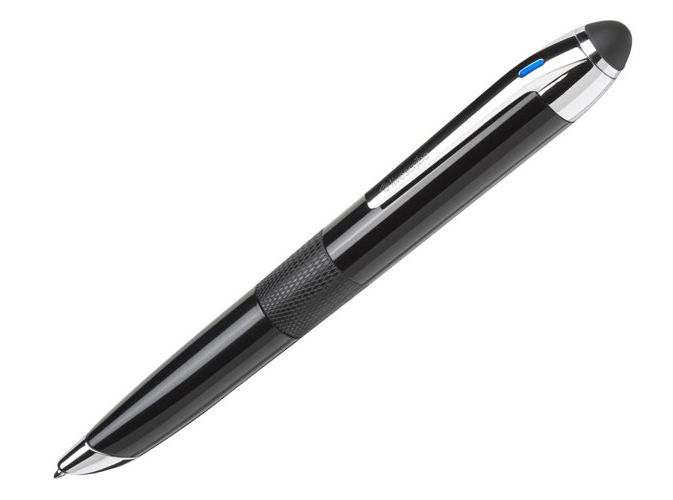 Livescribe has released its latest smartpen that allows users to take written notes, record audio and have a digital reference of everything they’ve written or drawn.

But this time out the company has drastically redesigned the pen and the system.

Before the pen did all of the heavy lifting – it kept track of all your notes, had an onboard recorder for the audio and a display to help you navigate the system.

This time around the Livescribe 3 is used in conjunction with an app on the iPhone or iPad to keep track of your notes.

And instead of using the pen to record, the free Livescribe app uses the iPhone or iPad’s microphone to capture the audio that is automatically linked to the notes being taken at the time.

The new pen is rounder than the previous iteration and has a twist on/off ring halfway down the chassis.

The Livescribe 3 pen links to the iPhone or iPad via Bluetooth and, once paired, becomes a digital copy of everything you write.

Users are still required to write in special Livescribe notebooks that have tiny dots to help the pen to map your handwritten notes and create a digital copy.

The notebooks also have commands to pair the pen and initiate audio recordings as well.

With the previous version of the Livescribe pen the recorded audio could be played simply by tapping on the part of your notes on the page.

The pen would then play the audio captured when that note was written through a tiny speaker.

With Livescribe 3, the notes you write on the notebook appear almost in real time on your device’s screen as if a ghost is writing identically next to you.

Once a recording is initiated the free Livescribe app goes into action once again and a red bar can be seen to indicate audio is being captured.

The notes with attached audio appear green on the iPad or iPhone’s screen.

The biggest advantage of pairing the Livescribe 3 with a device is the fact your notes are saved digitally instantly.

They can also be shared through iCloud, Dropbox and Evernote so they can be accessed from anywhere.

Another a handy feature of the new Livescribe app is that it can also take your handwritten notes and use recognition software to convert them to editable text.

Now if you don’t feel like sitting at a keyboard to write something, you can now just write it with the Livescribe 3 pen and convert it later.

Your notes, either handwritten or converted text, can also be shared on social media or by email or in a message.

The downside of the new set up with Livescribe 3 is that you are now forced to pair it with a separate device – in this case the iPad or iPhone.

But, to be fair, the odds are you’d have one of these devices with you anyway.

With the earlier models recording your notes was as easy as pulling out the pen, turning it on and writing.

You could save your notes digitally later but you could still hear the audio by tapping on the appropriate part of your notes on the notepad.

These older versions of the Livescribe pens are still available to purchase.

The other downside of the Livescribe 3 is that it doesn’t support Android devices and doesn’t have an Android version of the app but the company says that will be rectified in early 2014.

At the moment the Livescribe app and Livescribe 3 pen will work with the iPhone 4S and above and the iPad third generation and above running iOS 7.

If you’re a note taker – either because of your profession or educational requirements or just still like the feel of pen on paper – then the Livescribe 3 can empower you like never before.