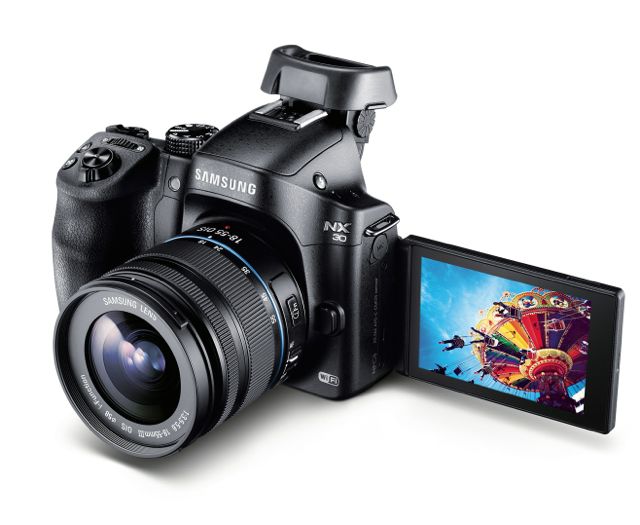 Samsung hopes to make a splash with its cameras over the coming year and its betting heavily on the new NX30 to earn an enduring place as a market leader.

Presented this week to media at a launch event in Hobart, the NX30 is a hybrid DSLM housing a 20.3-megapixel CMOS APS-C sensor and presents buyers an attractive value proposition.

Features include an ISO range of 100 to 25,600; an articulated electronic viewfinder that swivels out from the body for top-down viewing along with a brilliant, tilt/swivel AMOLED rear display; a simple but effective control layout and burst shooting; manual controls.

Also on board is NFC (near field communication) plus Wi-Fi with dedicated iOS and Android apps for sharing between devices; and a range of in-camera effects and editing options.

Of the three features that stood out during my initial hands-on with the NX30, the most appealing was the APS-C sensor, which differentiates the NX30 from the Micro Four Thirds cameras that compete with it in the same price range and form factor.

Indeed, I suspect Olympus and Panasonic will be keeping a close eye on Samsung, which is clearly attempting to eat into the keen amateur market.

The other two tasty features were the quality of the 18-55mm kit lens and the touchscreen control that splits the touch focus point to provide an additional exposure weighting point.

Another feature I enjoyed was the bracketed exposure option found in the drive selector switch.

Once activated, the camera will shoot three frames within a user-variable bracketing range, such as one stop underexposed, the nominal exposure, and one stop over.

This helps land the ideal exposure in difficult lighting conditions, such as with partially backlit subjects that can otherwise be difficult to judge.

This is by no means a breakthrough feature but including it as one of four options in a drive selector just makes a lot of sense.

But above all, it’s the APS-C sensor that makes this camera well worth considering.

With pixel dimensions of 5472px x 3468px, you’re working with a level of detail similar to that found in prosumer DSLRs.

Of some concern, given Samsung’s relatively shallow pedigree in this space, is the depth of the ecosystem that accompanies the NX30.

Samsung says it will be making a lot of noise this year about the lens system they’re breeding for the NX30.

On top of this, a look through the menu system revealed a wireless flash function intended for flash units that are yet to be released here.

So it looks like Samsung is set on making a very serious effort to build its presence among those who want a camera that’s easy to travel with, provides better images and more creative control than a smartphone, yet one that doesn’t require a demanding investment.

Given Samsung’s recent history with smartphones, it would seem a fair bet we can expect an aggressive play for consumers who are also looking for something outside the Micro Four Thirds system.

Samsung also announced the NX30 had received the TIPA “Best Compact System Camera Advanced 2014” award which is likely to be the first of many accolades.

The NX30 is available in Australia this month.

Stay tuned to Tech Guide for a full review in the coming weeks.

* Chris Oaten is a professional photographer from Insight Visuals.