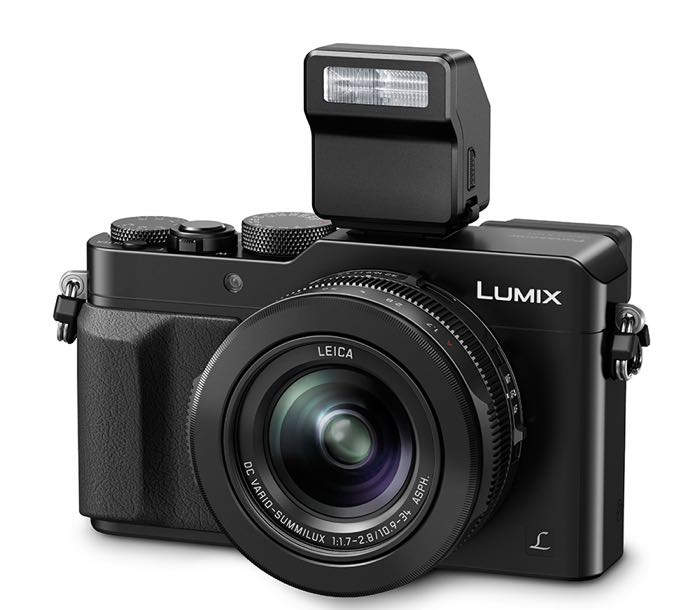 Panasonic has revealed three new products that show yet again the company’s commitment to 4K video and innovation across its range of cameras.

These offer some intriguing new features, not least of which is the LX100’s aspect ratio switching with 4:3, 3:2 or 16:9 options. No big deal? It is when the physical switch is on the lens.

It’s clear once you see this feature that Panasonic is pitching to the serious user with this camera.

In the hand, it’s a very light, diminutive shooter that, with its old-school rangefinder-style design and controls layout, may well become a darling of the street photography scene.

In our brief hands-on test shots, even shooting in JPEG, the images were crisp and well-detailed.

Also appealing was the camera’s 4K video with 4K photo mode, which enables you to shoot action in 4K video and later extract an 8MB JPEG still from the video.

This is a pretty good workaround to address the challenge of capturing action with a camera of this type.

Panasonic boasts the GM5 as being the world’s smallest interchangeable lens camera with a Live View Finder.

One of its key features is “snap movie mode”, which plays off the popularity of short-duration video sharing (think Vine) by enabling recording and snap editing for quick sharing.

That you can build a system around this camera from wide range of dedicated lenses built for G series cameras should not be overlooked.

While this sounds like a lot of fun for those who have embraced that trend, I didn’t get to try it out but the stills off this camera were pretty damn good with excellent dynamic range and impressive shadow detail.

The LX-100 is priced at $1199. Optional accessories include an auto lens cap, be sure to check that out when you visit a store, and two external flash models. Both cameras will be available next month.

The third item announced today, the HC-X1000 is a 4K camcorder that, at $3999, hits the mark for semi-pro and pro shooters looking for an affordable 4K camera.

Also announced was the addition of 4K Photo Mode to the GH4 and FZ1000 models. The new feature is enabled via a firmware update.

An interesting feature listed in the press release was a Loop Recording mode for the GH4.

This enables the saving of the five newest two-minute 4K clips so that you can capture something you know is going to happen but don’t know when without worrying about running out of space on your memory card.

* Chris Oaten is a professional photographer from www.insightvisuals.com.au