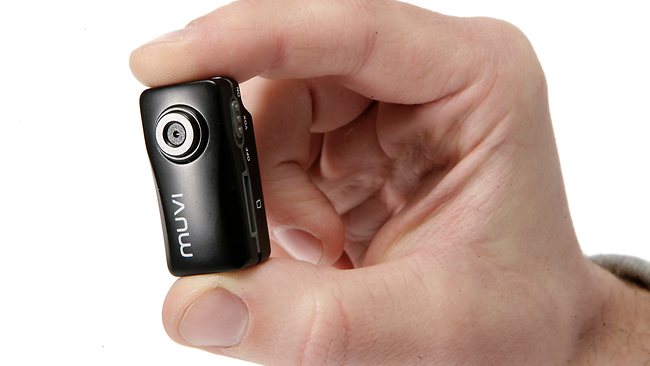 Strapping cameras to yourself to record your activities is more popular than ever and the Veho Muvi Atom action camera is small enough to go anywhere with you.

The world’s smallest action camera, the Muvi Atom can capture video and snapshots during even the most challenging sporting activities.

Measuring just 4cm long and weighing just 40g, the Muvi Atom is useful not only for sporting enthusiasts but, because of its small size, can also be used for security and surveillance as well.

Video is captured at the standard definition resolution of 640 x 480 along with 2-megapixel stills on the included 4GB microSD card which can fit up to 90 minutes of video in the .avi format.

Also included with the Muvi Atom “No Proof No Glory” edition that Tech Guide reviewed was a waterproof housing which allows the device to go up to 30m underwater.

It’s still possible to operate the device while it’s inside the housing to start and stop recording as well as capture stills.

Users can even capture stills while your recording video so you don’t miss a thing.

Speaking of mounts, the Muvi Atom has a few if its own that clip to the back of the housing and can be worn on a headstrap or attached to virtually anything with the included velcro straps.

Even when the Muvi is out of the housing there also mounts to clip securely to the tiny camera which allow it to be clipped to clothing and objects and also attached to walls using the double sided mounting tape provided.

Video quality was impressive despite the fact it was standard definition. The advantage of SD video is that it’s even easier because it is a smaller file size than high definition.

As it states on the packaging – No Proof No Glory – so users are going to want to share the videos they capture with the Muvi Atom.

Those looking to capture high definition video would be better off looking at other more expensive products like the GoPro, Sony Action Cam and the Contour HD.

But the biggest ticks for the Muvi Atom are the price and smaller size. It offers great value and convenience because you’re not going to be weighed down with a larger device.

If you consider yourself a person of action, the Muvi Atom is a reliable and affordable way of capturing your adventures no matter where you go.

The Muvi Atom Action Camera is available now from JB Hi-Fi along with a number of additional accessories.