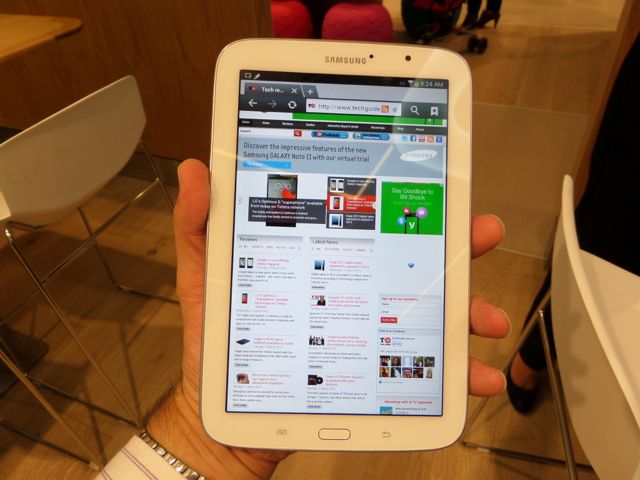 Tech Guide has had a hand-on look at the new Samsung Galaxy Note 8 tablet which was unveiled as part of the Samsung Experience Store opening in Melbourne.

The device looks like an oversized version of the Galaxy Note II and maintains similar design and styling.

The wi-fi version of the Galaxy Note 8 tablet will be priced at $459 when it goes on sale in Australia in early to mid April.

A 4G version will also become available later this year which means users can connect to the internet from anywhere and also make phone calls with the device.

The Galaxy Note 8 is light (it weighs just 338g) and can be easily held in one hand which makes it ideal for reading.

One of the new features of the device is Reading Mode which can optimise the 8-inch screen to provide the best reading conditions for your surroundings and lighting levels.

The new Samsung device is going to draw many comparisons with Apple’s popular iPad Mini which was released in late 2012.

Under the hood the Galaxy Note 8 has a quad-core 1.6Ghz A9 processor and is running Android 4.1.2 Jelly Bean operating system.

And being a Note device there is the popular S Pen which allows users to write directly into the screen and interact with the device in a number of different ways.

Keep an eye out for a complete Tech Guide review and road test when the Samsung Galaxy Note 8 is released in Australian in April.