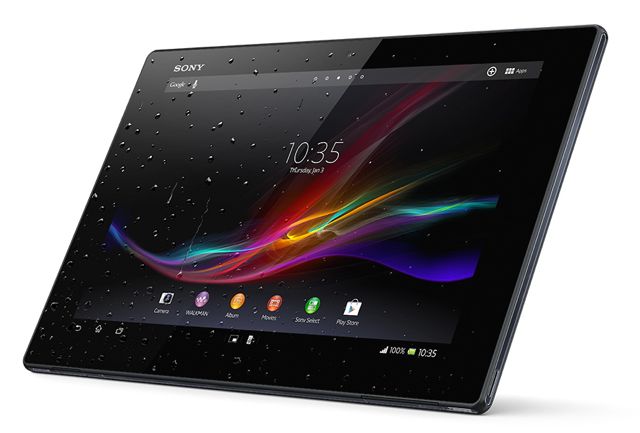 Sony has unveiled the world’s thinnest 10-inch tablet – the Xperia Tablet Z – which is just 6.9mm thick, weighs 495g and is also waterproof.

The new device was revealed at the Mobile World Congress tradeshow in Barcelona and will launch globally in the second quarter of 2013.

The Xperia Tablet Z takes a leaf out of the design book of the Xperia Z smartphone which was one of the most popular new products at the Consumer Electronics Show in Las Vegas.

Tech Guide was given a hands-on demo of the Xperia Z tablet and it feel thin and surprisingly light. The screen was also remarkably sharp and bright.

Running the Android 4.1 Jelly Bean operating system, Sony’s new device will be available in black and white and is also the first tablet to run the Qualcomm Snapdragon S4 Pro quad core processor.

It will be upgradeable to Android 4.2 soon after launch.

It also has the highest level of water resistance (IP55 and IP57) ever for a tablet so it can easily handle a spill or a splash.

In fact during Tech Guide’s hands-on with the Xperia Z, it was actually submerged into a bowl of water while it was playing a movie.

And even when the device was removed from the water, the touchscreen was still responsive while it’s still wet and when the user has wet fingers.

Also on board the device are NFC (near field communication) for easy pairing with compatible audio devices and content sharing and an 8-megapixel rear camera and a 2-megapixel front camera.

The Xperia Z tablet is also a Universal IR (infrared) remote to allow users to control their TV and other Sony products.

At launch there will also be a number of accessories available for the product including a charging cradle, screen protector and leather carrying cover in black, red and white.

“Xperia Tablet Z reinforces our intention to be a leading player in the premium Android device market, by building on the principles established by Xperia Z and perfectly optimising them for the tablet form factor.”

The new Xperia Z tablet and Xperia Z smartphone have given Sony a solid start to 2013 and could see the company claw back some ground lost in recent years.

Listen to episode 35 of the top-rating Tech Guide podcast