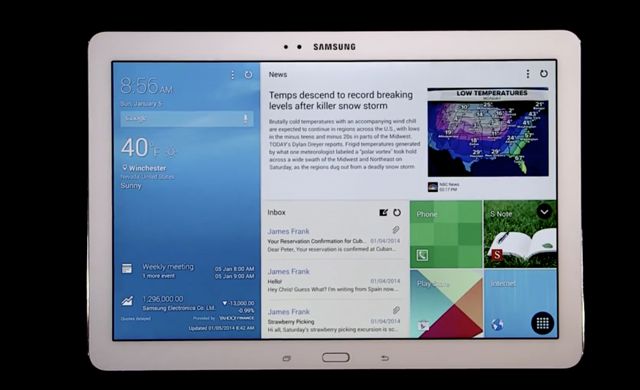 Samsung has upped the ante in the tablet stakes at the International Consumer Electronics Show after unveiling world-first 12.2-inch tablets in Las Vegas today.

The Galaxy NotePRO and TabPRO have a 12.2-inch full high definition WQXGA screen that has taken Samsung’s tablet range to the next level with a viewing area that is 48 per cent wider than that of a 10-inch tablet.

Both models have also increased multitasking capacity with the ability to run up to four apps at the same time on the larger screen.

Samsung will also offer 8.4-inch and 10.1-inch versions of the TabPRO tablets to sit along side their big brother.

On the TV front where Samsung dominates the worldwide market, the company took the covers off its new range of smart TVs that include a 105-inch UHD 21:9 TV with a 5K resolution.

Also included in the Samsung TV range is the U9000 series of curved UHD TVs in 55-inch and 65-inch sizes with a minimal base and almost non-existent bezel so you’re completely immersed in the picture.

Samsung will also continue to offer the Evolution Kit, a module that can keep your TV up to date with the latest processor and operating system, for its new line-up of UHD televisions.

On the smart appliances side, Samsung has directed just much energy and innovation to these products as they have with their entertainment products.

Now a single app can control Samsung’s appliances with its new Smart Home service whether it’s the lights and air conditioning or the kitchen appliances and the home’s security system.

Samsung’s Smart Home service works with an app that can be installed a smart TV or mobile device or even on a wearable device like Samsung’s Galaxy Gear smartwatch to connect to a range of products through an integrated platform and server.

The Two Blokes Talking Tech are in Vegas for CES