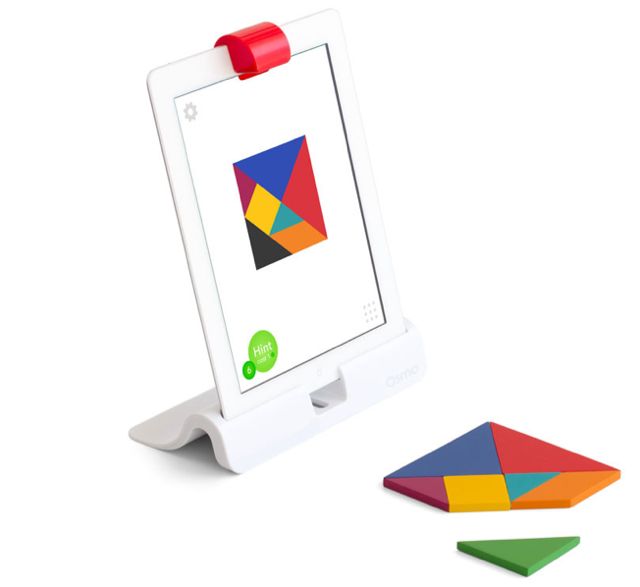 Osmo bridges the real world and digital world with the iPad

Osmo is an iPad accessory that can bridge the gap between the real world and the digital world for some creative learning and game play.

The device is made up of a reflector that clips on to the top edge of the iPad over the camera and a stand to hold the tablet securely in place.

Once it’s set up the camera will see what’s in front of the iPad including alphabet block and tangram tiles that come with Osmo.

In Tangible Play Newton, players have to prevent balls from falling by drawing objects on paper in front of the iPad. Newton then takes what is drawn and uses it on the screen.

With Tangible Play Words you have to spell out the words on the screen with the real letter blocks that come with Osmo.

You have to arrange the geometric Tangram shapes to match what’s on the screen with Tangible Play Tangram either as a solo match or with a friend.

Osmo will have lots of uses and is sure to be adopted by third party developers to create fun and imaginative apps that will work with the product.

It will also make the iPad a multi-player device that will allow several people to play together at the same time instead of the usual single player style of most tablet games.

And Osmo also looks like being favoured as a learning device after successful trials in San Francisco’s Bay Area schools.

The device was designed and developed by young parents who happen to be engineers from Stanford and Google who were interested in developing new digital experiences for their kids.

Osmo will be released in October and has a pre-sale price of $US49 – down from the $US99 when it is officially released – plus shipping.

It is designed for iPad 2, iPad 3, iPad 4, iPad Mini, iPad Mini with Retina and iPad Air.