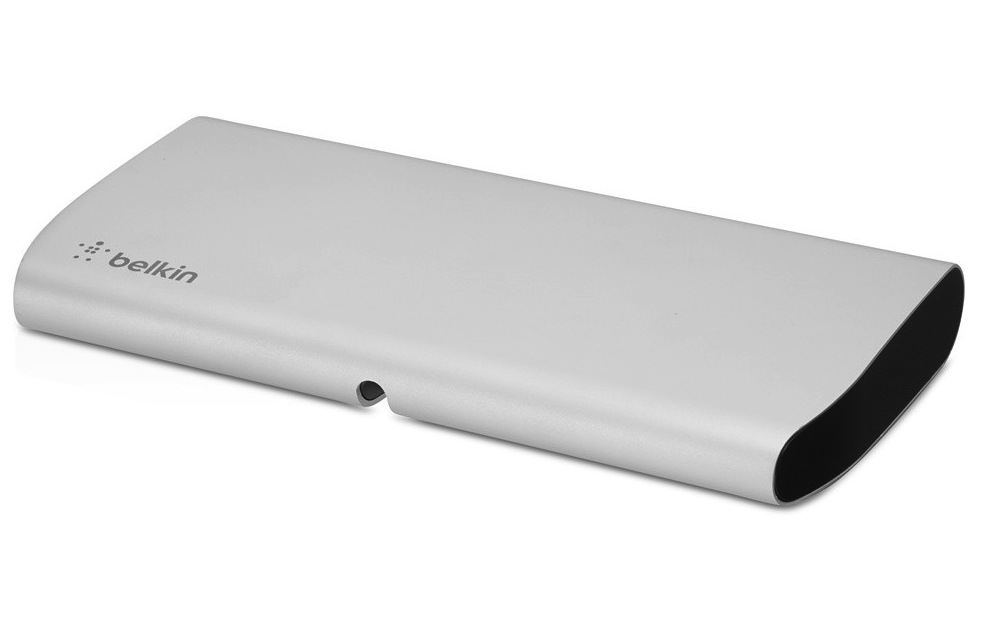 We can always use more ports on our computer to connect other devices and the Belkin Thunderbolt Express Dock offers just the solution.

Designed for Mac users and dressed in the same silver aluminium housing seen on the latest iMac and MacBook laptops, the Belkin Thunderbolt Express Dock offers a wide range of connectivity options.

It can connect up to eight other devices like monitors, external hard drives, printers and other peripherals as well as linking your internet connection to computer.

The Belkin device is shaped like a wedge with the ports on the thicker end.

There’s also a cable channel that runs under the middle of the product to allow a cable to run in from the front of the product and easily feed around to the ports on the back.

Today’s Mac computers, especially MacBooks, are becoming thinner and lighter and the feature jettisoned to maintain that sleek look is usually a port.

To connect an Ethernet cable on a MacBook Pro with Retina Display, for example, you need to buy a $35 adaptor and plug it into one of the two Thunderbolt ports.

On a Macbook Air there is only one Thunderbolt port and also no Ethernet port.

This is why the Belkin Thunderbolt Express Dock can be such a useful product to keep those connectivity options open.

Even iMac users can utilise the Belkin device to organise their desktop and workstation.

For our testing we used the Belkin Dock with the latest iMac to connect a second Apple monitor through Thunderbolt as well as a Thunderbolt hard drive and a FireWire hard drive.

The latest iMac doesn’t have a FireWire port anymore so if you’ve got a FireWire external hard drive, like we do, the Belkin Dock allowed us to connect it to our new system.

We also used the USB 3.0 ports to connect an external Blu-ray Disc optical drive which left the USB ports on the iMac free to connect our keyboard, a printer and our Mobee Magic Mouse charger.

It’s not hard to run out of ports as you can see, so being able to replicate the ports on the back of your computer with the Belkin Thunderbolt Express Dock is very useful.

The Belkin dock requires power and comes with a large power supply brick that is plugged into the wall and is almost as big as the product itself.

Now how much would you expect to pay for the Belkin Thunderbolt Express Dock?

It’s a whopping $349.95 which may just put this beyond the reach of many users.

And to make matters worse, that price doesn’t even get you a Thunderbolt cable which means you need to spend another $50 to actually use the product.

To get around your Mac’s port limitations with Apple’s adaptors usually cost $35 a pop but if you can afford it, the Belkin Thunderbolt Express Dock is ideal for users who want to connect all of their devices and transfer data at high speed.

Belkin’s WeMo devices can now be controlled by Android users