The Australian tablet market has dropped for the second year in a row but its due for a resurgence in 2016 with Microsoft and Apple fighting for the top spot with high end devices.

But despite this 18 per cent downturn, Telsyte says the market is set to pick up dramatically as customers look to higher end tablets that have the power and versatility of a laptop.

And even though there were less units sold in 2015, the tablet segment actually saw a 2 per cent increase in revenue due to price increases and the movement towards more premium products.

Telsyte puts this downward trend down the take up of phablets – larger screen smartphones. 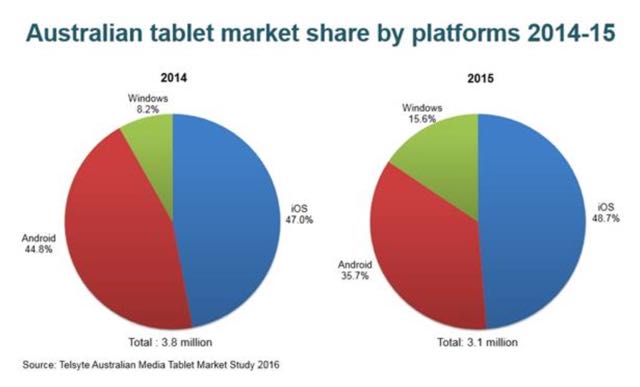 Microsoft’s surge is the result of its powerful Surface Pro tablets running Windows 10.

Telsyte says the Android tablet market penetration is being held back by the lack of a “hero” device as customers look for a device that offers more capabilities than a plain tablet.