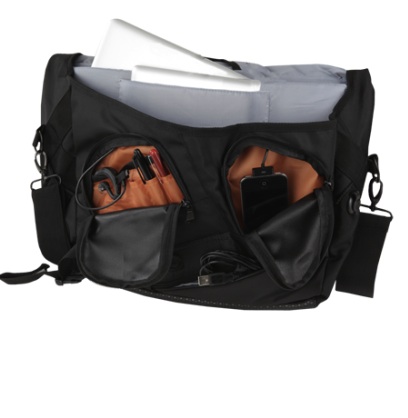 We’re all carrying around plenty of mobile gadgets – a smartphone, tablet, music players and more – but keeping them all charged on the go is a challenge.

Not anymore thanks to a new bag unveiled at the Consumer Electronics Show in Las Vegas – it’s called the PowerBag and it certainly lives up to its name.

Not only can the bag carry all your tech products – it can also charge four at once thanks to an on board battery.

How many times have you pulled your mobile device out of your bag when you’re out and about and seen the battery is nearly dead?

Sure you can get to a powerpoint and plug in the charger but the problem with that is you aren’t always near power and you can’t sit and wait in one spot for the device to  be completely recharged.

The PowerBag is ideal for travellers or anyone who uses their devices on the move.

That’s where the PowerBag comes in. The built in battery has enough stored power to recharge your mobile device up to four times.

Inside the bag is a USB port, and connecters that will fit iPhone, iPad, iPod Touch, MP3 players, Android smartphones and tablets, BlackBerry devices and eReaders.

PowerBag comes with its own charger and attached to a powerpoint from an opening near the bottom of the bag.

There’s also an indicator showing how much power is left on the bag’s battery as well as an on/off switch.

The PowerBag was such a hit at CES it named as an Innovation Award Honoree.

The PowerBag is available in several styles – backpack, messenger, rolling briefcase and are priced from $US139.99.