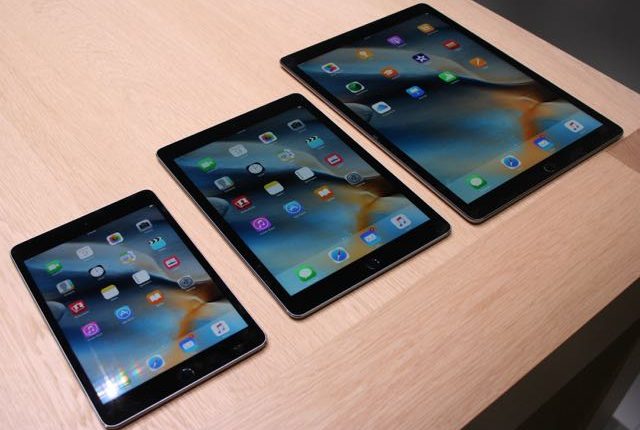 Apple has gone big with the all-conquering iPad and added the iPad Pro – which has a 12.9-inch screen – to the product line-up which was unveiled at a special event in San Francisco today.

The device also has the power to back up that bigger screen with a new A9X 64-bit processor that provides PC-like performance and that’s 1.8 times faster than the A8 silicon.

The larger iPad Pro provides 70 per cent more screen real estate than the iPad Air 2 and has the highest resolution of any iOS device.

This new size will open up the already numerous uses for the device even further and allows users to literally go hands on with their editing and document creation. 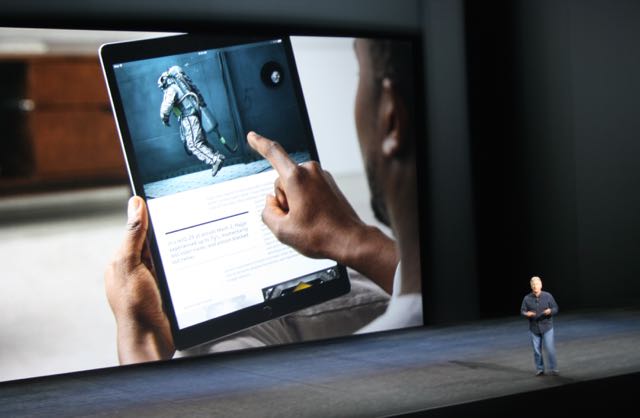 Unveiled alongside the iPad Pro were two new accessories – a smart keyboard case and the Apple Pencil.

The smart keyboard links to the device through an all-new connector that relays power and data at the same time.

The keys feature the same dome switch that was introduced on the MacBook earlier this year so users can enjoy an excellent typing experience.

The Apple Pencil allows users to draw and write on the screen and works with apps like Microsoft’s Word and Adobe applications.

Former Apple CEO Steve Jobs – when he first unveiled the iPad back in 2010 – said the finger was the best stylus you can use.

Today that thinking has obviously changed with a device that’s the size of the iPad Pro. 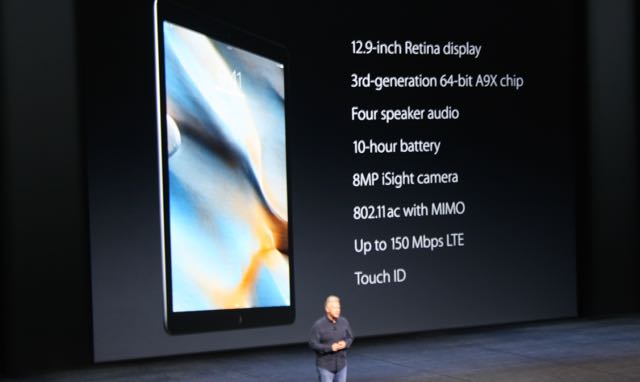 The Apple Pencil is super accurate no matter what angle you hold or tilt the device.

The end of Apple Pencil has a removable cap with a Lightning connector underneath so it can be also plugged into the iPad Pro to be recharged.

The iPad Pro is ideal for work or play whether you’re editing a movie or creating and editing a document or watching a movie in the spectacular larger screen which has more than 5.6 million pixels.

The device itself is just 6.9mm thick (the iPad Air 2 is 6.1mm) and also features four speakers that create a left and right stereo effect as well as providing three times the audio volume of the iPad Air 2. 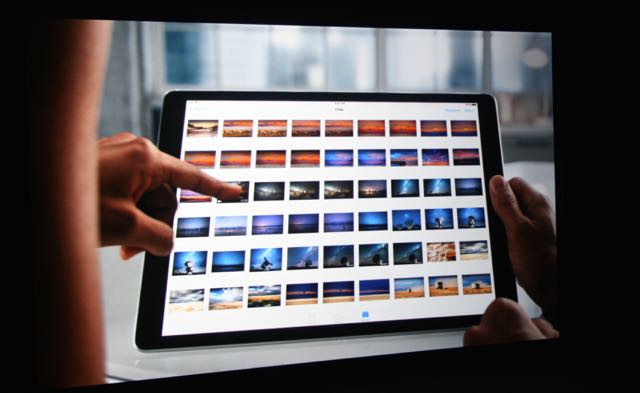 The height of the iPad Air 2 screen is actually the same width of the iPad Pro screen to allow apps to scale perfectly on the larger screen.

Also on board is an 8-megapixel camera and touch ID fingerprint reader under the home button.

The iPad Pro will be available in three colours – gold, silver and space grey and three memory capacities of 16GB, 64GB and 128GB.

Australian pricing has yet to be announced.