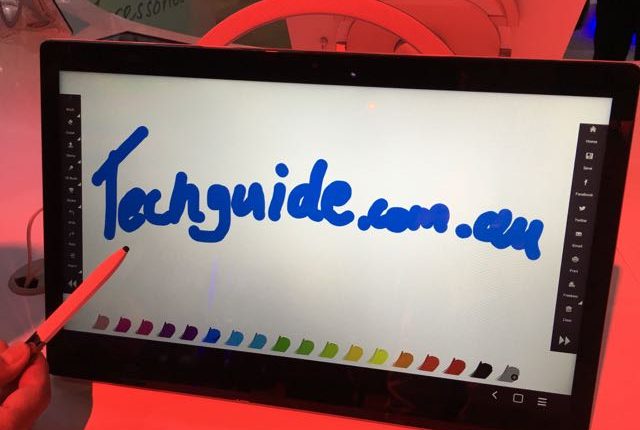 Alcatel OneTouch has revealed a head-turning new product on its stand at the Consumer Electronics Show in Las Vegas – a massive 17.3-inch Android tablet called Xess.

Also onboard are built-in JBL speakers along with a fold-away carry handle and an adjustable stand.

Now why would you want a 17.3-inch tablet I hear you ask?

On the rear panel it has a circular pop-out panel that reveals a USB port so users can upload and share data as well as connect a peripheral device like an external hard drive.

And with Bluetooth on board it’s also possible to connect a wireless keyboard and mouse and suddenly you’ve got a portable desktop computer.

The stand can be adjusted to any angle so you can position it like a monitor or tilt it down to an easier angle to draw (it comes with a stylus that fits on the rear panel) and navigate the touch screen.

Through the Xess’s wi-fi connectivity it could also be used to stream content from services like Netflix so it can be your television too.

And then when you’re done, or someone in the household wants to use it, simply pick it up by the handle and carry it wherever you like. It could easily travel with you on a family holiday.

And when it’s not in use there is a cover with a circular window that fits over the screen and puts the device into standby mode by displaying a large clock.

There are no concrete plans for the Xess to be brought into Australia at this stage but it is being seriously considered.

Pricing has also not been determined but we expect Alcatel OneTouch – the company that builds their own products from end to end in their own factory – will be able to offer tremendous value for customers if it does make it to Australia.