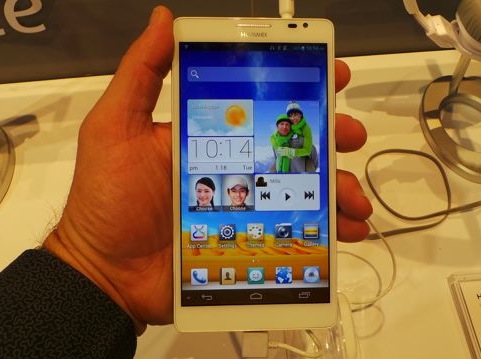 When is a smartphone screen too big? And at what size does it go from being a smartphone to a tablet. We asked this question after getting our hands on the gigantic Huawei Ascend Mate which has a gargantuan 6.1-inch screen.

The trend towards larger smartphone screen is clearly evident with displays on some device now commonly seen at around the 4.5-inch to 4.8-inch mark.

Samsung have taken that up to 5.5-inch with the Galaxy Note II which is proving extremely popular among customers who appreciate the added screen real estate.

But Huawei has now claimed the crown for the world’s largest smartphone which was unveiled at the recent Consumer Electronics Show in Las Vegas.

The Ascend Mate has a huge 6.1-inch screen which even made the large Galaxy Note II look small.

And it made the iPhone 5 look absolutely miniature.

Apple has been one of the only companies to resist the trend toward larger and wider screens with the iPhone.

Up until the release of the iPhone 5, Apple has stayed with the 3.5-inch screen size.

But when it decided to increase the screen size for the iPhone 5, Apple decided to make the screen half and inch longer while maintaining the same width.

And the reason it cited was the way the device could still be operated with one hand.

But in light of the rush towards larger screens which are attracting loads of customers, Apple runs the risk of being left behind.

Apple, already in the news this week because of falling stock prices despite record sales and profits, have some challenges they need to face with the iPhone.

The first is whether Apple makes the decision to go larger.

And if it does it will have to ensure the apps that run on the regular iPhone will scale seamlessly to the larger screen.

Perhaps a device like this could be called the iPhone HD.

But another area Apple has to look at is the entry-level market.

There’s a lot of money to be made by smartphone manufacturers at the lower end.

But Apple is perceived as high end product only and is missing out on the low hanging fruit of entry-level customers that other companies are reaping.

But Huawei has taken the “go big or go home” attitude with the Ascend Mate and its 6.1-inch screen.

The downside of course is the fact you’ve got to lug this large device around with you.

A device might not appeal to women even though many would be carrying it around in a handbag.

And there would be a lot of other users worried they’ll look a little silly holding this massive device to their head to make a phone call.

With all of that in mind it begs the question – is bigger better? Only time will tell.