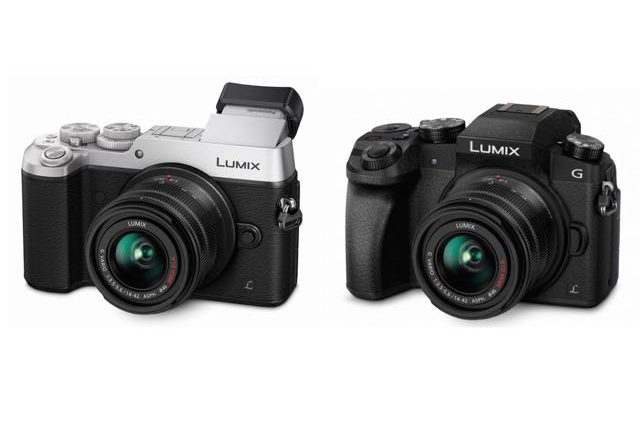 What could be better than one Lumix camera to test? A second one – to make comparisons, and having the DMC-G7 and DMC-GX8 go head to head revealed something interesting, though not entirely surprising: a $500 difference between price tags counts for a lot.

And this is the clincher because if you take a close look through each of these cameras’ spec sheets you find that, technically speaking at least, there’s not that much separating the two.

Both offer Wi-Fi functions (though the G7 doesn’t have NFC) and both offer 4K video capture.

Both cameras feature Panasonic’s eerily good iA mode, which can manage a nearly-always-right assessment of the appropriate capture settings.

At face value and offering the same settings options, the autofocus systems are practically identical, though in testing the GX-8’s seemed a good deal more responsive and accurate.

Battery performance in each is practically the same.

The rear display panels are the same size but the GX8 has an OLED display, the G7 a TFT LCD.

Both cameras accept interchangeable lenses with a wide range of focal lengths on offer.

The control layouts are very similar, though I appreciate the GX8’s addition of an exposure compensation dial underneath the mode selection dial.

It’s an old-school addition to the control set and to this greybeard snapper makes all the sense in the world.

If you lack the confidence to shoot in manual mode, having an exposure comp dial you can actually come to grips with is the next best thing.

Also, both cameras offer Panasonic’s nifty 4K Photo trickery, with three capture modes that let you shoot some 4K video and immediately afterwards extract a JPEG by leafing through the video capture, frame by frame.

I was initially dubious about this feature, especially the mode that captures frames even before you press the shutter button, until I tried it out and managed to capture a peak action moment (of a duck taking to flight from a pond) that I otherwise would have missed and certainly would elude less experienced users.

I’m still of the view that capturing action is the Achilles heel of the DSLM camera design. However, Panasonic’s 4K Photo is arguably the best solution on the market for the burst shooting approach DSLM cameras have to employ for action shots and if you’re still having trouble with catching action stills, you can always fall back to capturing 4K video instead, which either of these cameras can do and do well.

So which of these cameras should you choose, if money were not the defining issue? The answer, I think, lies with a look at the top panel controls.

If you look to the left on the G7, you’ll see a shoot mode dial that switches through single shot to burst to 4K Photo to timer shooting and on the right hand side a corresponding button to easily switch between the 4K Photo modes.

If you look to the left of the top panel on the GX8 you’ll see a tilting Live View Finder and, for me, that’s the deal clincher right there.

The GX8 is going to be the choice of those who love to shoot stills, especially street shooters, and being able to look down into an LVF, old-school style as you would with a twin-lens Rollei, or with the LVF tilted to its default position to mimic the Leica rangefinder design, is a method of finding your subject that has much going for it.

Now, if it’s that 4K Photo capture you’re after, the G7 is better tailored towards that objective.

When I think back to the first hands-on with the G7 when Panasonic provided some parkour athletes to fix our sights on, the G7 reveals itself as the more accommodating camera for that purpose, especially from a handling point of view. It’s quick to put to work in that role.

I couldn’t test this feature to the extent I would have liked while I had the cameras because, disappointingly, the persistent run of bad weather we’ve been enduring in the southern regions of the country prevented it.

Getting out into some good light and further testing either the GX8’s or the G7’s 4K Photo mode with some good action subjects wasn’t on offer.

The same goes for the GX8’s Starlight AF, which enables accurate auto-focusing on a night sky.

If celestial photography is your thing, this is something you may want to look into but I couldn’t use it due to an almost total absence of cloudless night skies.

One important difference worth mentioning on the 4K Photo front is that the GX8’s high ISO performance outshines the G7.

I would avoid using either of these cameras with indoor lighting in their 4K Photo mode as the results when shooting at ISO 1600 or higher are a bit disappointing, more so with the G7.

However, if you really want to capture action stills of a sport such as indoor soccer, the GX8 should provide more satisfying results.

But with all that said, it’s the GX8’s superior image capture that wins me over.

One of my favourite haunts in Adelaide, the Central Market, is a great place to try a camera.

Plenty of colourful subjects in difficult, mixed lighting reveals a lot about a camera’s performance and especially its sensor. On this count the GX8 delivered but not just through the strength of its superior sensor but with excellent image stabilisation too.

So, if that nifty 4K Photo capability is the most appealing feature because capturing stills of sporting or other action situations is paramount, then the G7 will satisfy.

Also, when you look at the twin lens kit pricing on the G7 you’re seeing a lot of gear for under $1000, so the price-conscious buyer probably won’t go past it.

However, if it’s a higher image quality you seek and you can gather together a bit more of the folding stuff, you’ll be handsomely rewarded for picking the GX8, as well as getting the 4K Photo feature to boot. To my mind, it’s a no-brainer. Go for the GX8.