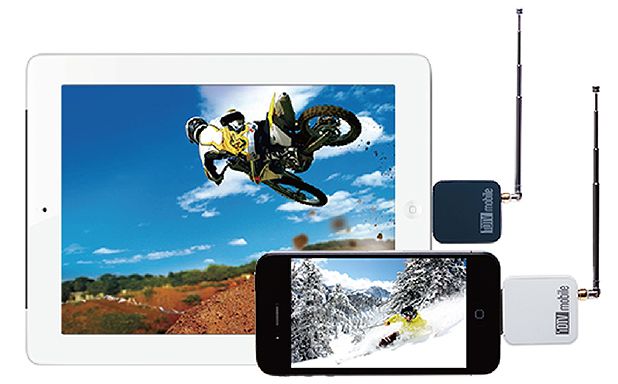 Take your TV anywhere with the new iDTV devices for iOS and Android including a new product with a Lightning connector to fit Apple’s iPhone 5 and iPad Air.

iDTV Mobile and iDTV Wi-Fi can bring digital TV to your smartphone or tablet no matter where you are.

Now viewers won’t have to worry about missing their favourite shows or sporting events because the iDTV products turn your mobile device into a television.

The iDTV Mobile is only the size of a 20 cent coin and about a centimetre thick.

It also has a Lightning 8-pin connector so it fits into iPhone 5, iPhone 5C and iPhone 5S along recent model iPads.

The device has a small extendable antenna to increase reception quality outside along with two other antennas to use in your home or on even in the car.

The iDTV Mobile is a small digital TV receiver that works with a free app to turn your screen into a television to watch standard definition free-to-air channels.

And because you’re receiving a TV signal just like your regular TV would through your roof antenna, you’re not connecting to the internet or using any data.

Users are also able to record live TV programs to their device to view later.

When the free companion app is downloaded, you are walked through the steps to scan for digital TV channels.

We found we couldn’t watch HD channels like One, Gem and SBS HD but all of the other free-to-air channels were supported.

iDTV Mobile has its own built-in battery which will run for about two and a half hours on a full charge.

The iDTV Wi-Fi, which is about the size of a matchbox, is a wi-fi hotspot with a built-in digital TV tuner to allow users on Android smartphones and tablets and iPhone and iPad users to link wirelessly to the device and watch TV on the go.

As long as your device is within the 10m range of the iDTV Wi-Fi you are able to stream the TV signal to the free app that can be installed on your smartphone or tablet.

And like the iDTV Mobile there is no data used to watch TV as it is being picked up through the antenna on the iDTV Wi-Fi and streamed to your device.

Users can also record live TV programs on the move.

The iDTV Wi-Fi has a built-in rechargeable battery that will run for three hours on a full charge.

Included with the device is an extendable outdoor antenna along with a booster antenna and a coaxial adaptor to use indoors with the aerial connection.

If you try and watch a high definition channel you can hear the audio but it will be a blank screen with the words “video not supported” on the screen.

Sales of tablets in Australia doubled in 2013