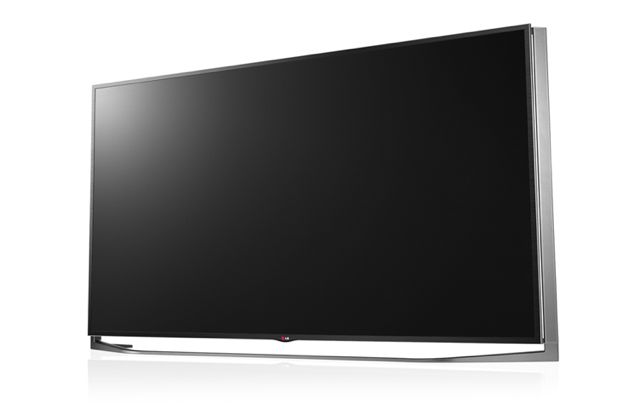 The 2014 range has been designed with the customer in mind. Most of the new models are 50-inches and above as market demand has shown.

What LG has also addressed with a new operating system is the difficulty for many users in setting up their TV, connecting it to the internet and getting the most out of it.

LG’s UB980T has a thin bezel that you won’t even notice when the TV is turned on and the screen is supported by a wide stand that runs the entire width of the panel.

This design means you’ll need a surface that has to be just as wide as the TV to support it.

Smaller stands under the middle of the TV allowed users to sit their TV on a smaller base with the edges of the TV hanging over the sides.

That’s not the case with this latest LG TV so you’d better take along your tape measure to the store.

The minimal design is complimented by the Harman Kardon speakers on either side of the screen that demonstrates LG is just as interested in audio quality as they are with picture quality.

The LG Smart TV has an all-new webOS that makes set up and operation of the TV as simple as ABC.

LG actually purchased webOS (operating system) from HP after it made its debut on the ill-fated HP tablet in 2011 and was discontinued within weeks.

But even thought the HP tablet died suddenly, the webOS lives on and has found a nice home aboard the LG smart TV.

Out of the box customers are stepped through the set-up process with the help of an animated bird that goes through and establishes your location, sorts out your connection to the internet and then goes on to tune the channels.

It takes a matter of minutes before the TV is connected to the internet, tuned with all of the digital channels and ready to watch.

But webOS doesn’t abandon you there. It is designed to make your day-to-day use of the TV easy as well.

That’s also helped along with the new Magic Remote – a small controller that is more like a computer mouse than a regular remote control.

It puts a cursor on the screen so the viewer can easily navigate the screen like they would on a computer with a mouse.

Along the bottom of the screen users are presented with the options that include catch-up TV, live TV, YouTube, apps and other connected sources like a Blu-ray Player or gaming console.

There’s also a scroll wheel on the Magic Remote to easily move up and down the channels. The scroll wheel is also a button to make selections – much like clicking the button on your mouse.

Our only complaint was that the cursor would hang around on the screen once we’d made our selection. It sometimes took about 10-15 seconds to disappear.

The LG UB980T has a wi-fi built-in as well as an 8-megapixel camera to make those Skype calls from your couch.

Users can also connect a hard drive to the TV and record their favourite shows. There are actually twin HD tuners onboard so you can watch one program while you’re recording another.

It also has Intel WiDI so users can beam their laptop screen to the TV as well as Miracast so you can mirror your Android’s device’s screen on the LG television.

The LG UB980T has ultra high definition (also known as 4K) resolution so there are more than 8 megapixels to enjoy.

There’s plenty of technology running in the background that contributes to the superb picture of the TV including the Triple XD Engine which is the processor that decides the colour, contrast and clarity.

When viewing the right content you can really see the UHD difference but there is not a lot of UHD content around at the moment so it’s hard to showcase the true clarity of the screen.

But the LG TV does have impressive upscaling capabilities with the Ultra HD Upscaling Engine Pro to take your existing content and bring it closer to ultra high definition quality.

There were much better results when watching high definition channels with a noticeable degree of added clarity.

And when we watched a Blu-ray Disc on the LG UB980T the upscaling technology had a chance to stretch out and really show off the screen’s real capabilities.

We found the picture at factory settings lacked a little warmth.

But the good thing was that we could easily adjust the picture to our taste with a guide that asked for our preferred options in a number of areas.

At the end of the process the picture was impressive and precisely how we liked it.

The colour was not too oversaturated and there were natural skin tones. Clarity when viewing upscaled Blu-Ray Discs was excellent and a lot of detail you may not have noticed viewing on a smaller full HD TV was now plain to see.

Contrast was also impressive and there was no sign of the smoky blacks that we’ve seen on much older LG TVs. The blacks on the UB980T were close to plasma quality.

Viewing angles were also excellent thanks to the IPS (in-plane switching) within the panel so everyone in the room gets a great view of the quality of the screen.

We salute LG for making a conscious effort to incorporate decent audio quality with the picture quality that seems to get all of the attention with other manufacturers.

LG has partnered with Harman Kardon to deliver high quality audio with speakers the run along the left and right edges of the screen.

There are 10 3-way speakers onboard that adds a richness to the viewing experience.

And because they are on either side of a 65-inch screen they are far enough apart for distinct left and right separation.

There are also six different sound modes to match what you’re doing or watching whether it’s playing a game or enjoying a movie.

With the 65-inch UB980T UHD smart LED TV, LG has delivered a TV that ticks the boxes for picture quality, sound quality, useful features and ease of use.

And when ultra high definition content does become readily available you’ll be thankful you have a TV like this one to truly enjoy it.

Google’s Chromecast streaming device lands in Australia on May 28