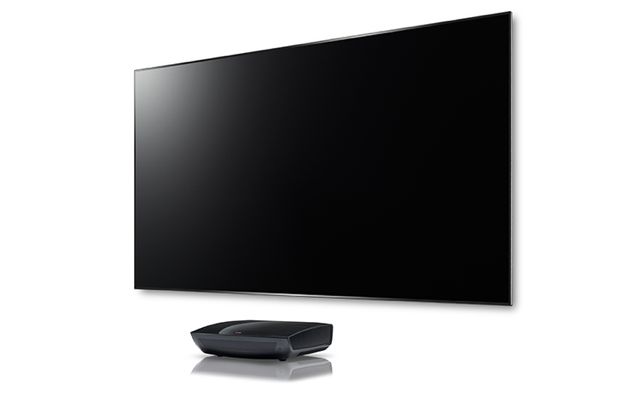 Anyone looking for the big screen experience at home without breaking the bank now has an excellent option with the new LG 100-inch Laser Display.

The new product will be available exclusively through Harvey Norman stores in mid July for $8,999.

The 100-inch screen has a special coating to absorb the projected light with less reflection to offer excellent picture quality, sharpness and brightness which is still clear and watchable during the day.

The screen also has a thin, almost invisible bezel so all you see is the picture.

LG’s projector which beams the full high definition screen image on the screen needs to sit just 55cm from the screen to create that impressive 100-inch picture.

A regular projector would need to be positioned either on the ceiling or in the middle of the room on a coffee table at least four metres away from the screen to achieve the same result.

A traditional projector also has no speakers and no TV tuner and is usually adopted by high-end users to create a dedicated home theatre, often at great cost.

That’s not the case with the LG Laser Display.

Once the 100-inch screen is mounted on your wall the DLP short-throw projector can sit in the entertainment unit below it just 55cm from the screen.

This way the cables run towards the wall and out of sight while staying within easy reach of your other components and the included twin HD tuner and Blu-ray player.

This relatively easy set-up also has another advantage – if someone gets up and walks across the room they are not going to get in between the projector and the screen and so won’t project their shadow on the screen and interrupt your viewing.

Another benefit of the LG Laser Display over a regular projector is the long-life lamp system which is made up of 36 laser diodes embedded in the projection unit.

If viewed for five hours a day this can last up to 13 years.

The lamp of a normal projector needs to be changed every two to three years at a cost of several hundreds of dollars.

With the additional twin HD tuner, users can also watch free to air TV on the Laser Display along with Blu-ray Discs in full high definition.

The picture quality is remarkable with accurate colours and clarity.

On the audio side, there are speakers built into the projector. But it can be easily connected to an existing speaker system or linked to a soundbar system.

As for connectivity, the LG Laser Display has three HDMI inputs to connect other sources as well as two USB ports and an Ethernet connection.

The product also has built in wi-fi and Intel Wi-Di compatibility which means users can mirror the screen of their compatible laptop on the 100-inch screen – a handy feature for business use including video conferencing and presentations.

Despite its $8,999 price tag, the LG Laser Display is still a lot cheaper than buying a 100-inch plasma or LCD which would cost tens of thousands of dollars.

And trying to achieve a 100-inch picture with a regular projector with additional speakers, tuners and a separate Blu-ray Disc player/recorder would also run at a far higher cost.

LG’s 100-inch Laser Display will be available from Harvey Norman from mid-July for $8,999.