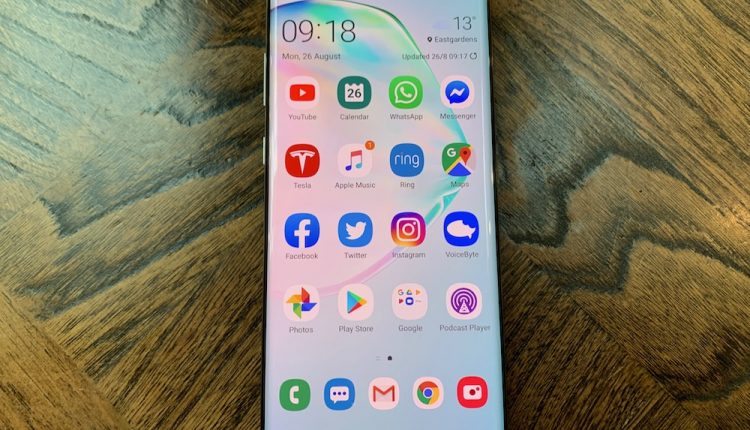 The Samsung Galaxy Note 10 is a triumph of technology that can empower everyone from power users to artists and photographers and everyone in between. It is an incredible blend of design, power and performance. If there is a better smartphone on the market, we haven't seen it.

When it comes to smartphones, Samsung just keeps raising the bar every time it releases a new device. Case in point – the new Galaxy Note 10 and Note 10+ which combines design, power, performance and features like no other device the company has ever produced.

The Note 10 is a flagship powerhouse designed for power users.

The Samsung Note users are an extremely loyal bunch and they will no doubt have their eye on the new smartphone which is a solid upgrade from last year’s Note 9.

The Galaxy Note 10 has a fresh and exciting new design, a remarkable screen, inventive new features, a stunning front and back camera and, of course, an even better S Pen which sets the product apart and makes the Note, the Note.

And this year, there’s not just one new smartphone, but two.

The 6.3-inch Note 10 is aimed at the potential new Note customer who doesn’t want to be intimidated by the larger screen and power and feel like it’s too much to handle.

And the 6.8-inch Note 10+ (the device we’ve been using for this review), for existing customers, will be the Jerry Maguire phone because it will “have them at hello”. 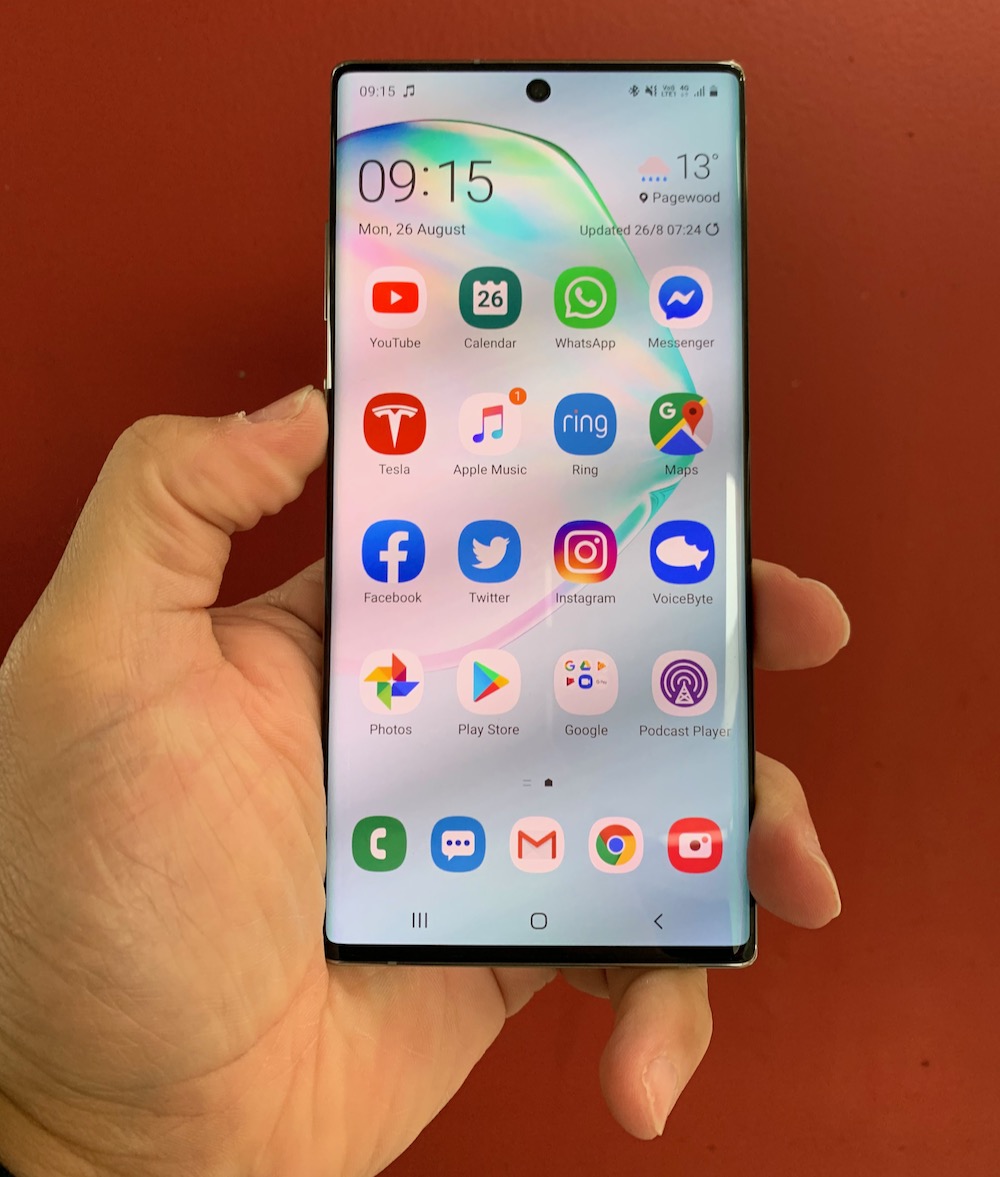 The Dynamic AMOLED Infinity O display is HDR10+ certified and video content looks amazing on it.

With the single hole punch in the top centre of the display, it actually makes it less obtrusive than tucking it into the corner like the S10+ and S10 5G with their large dual camera hole punches. 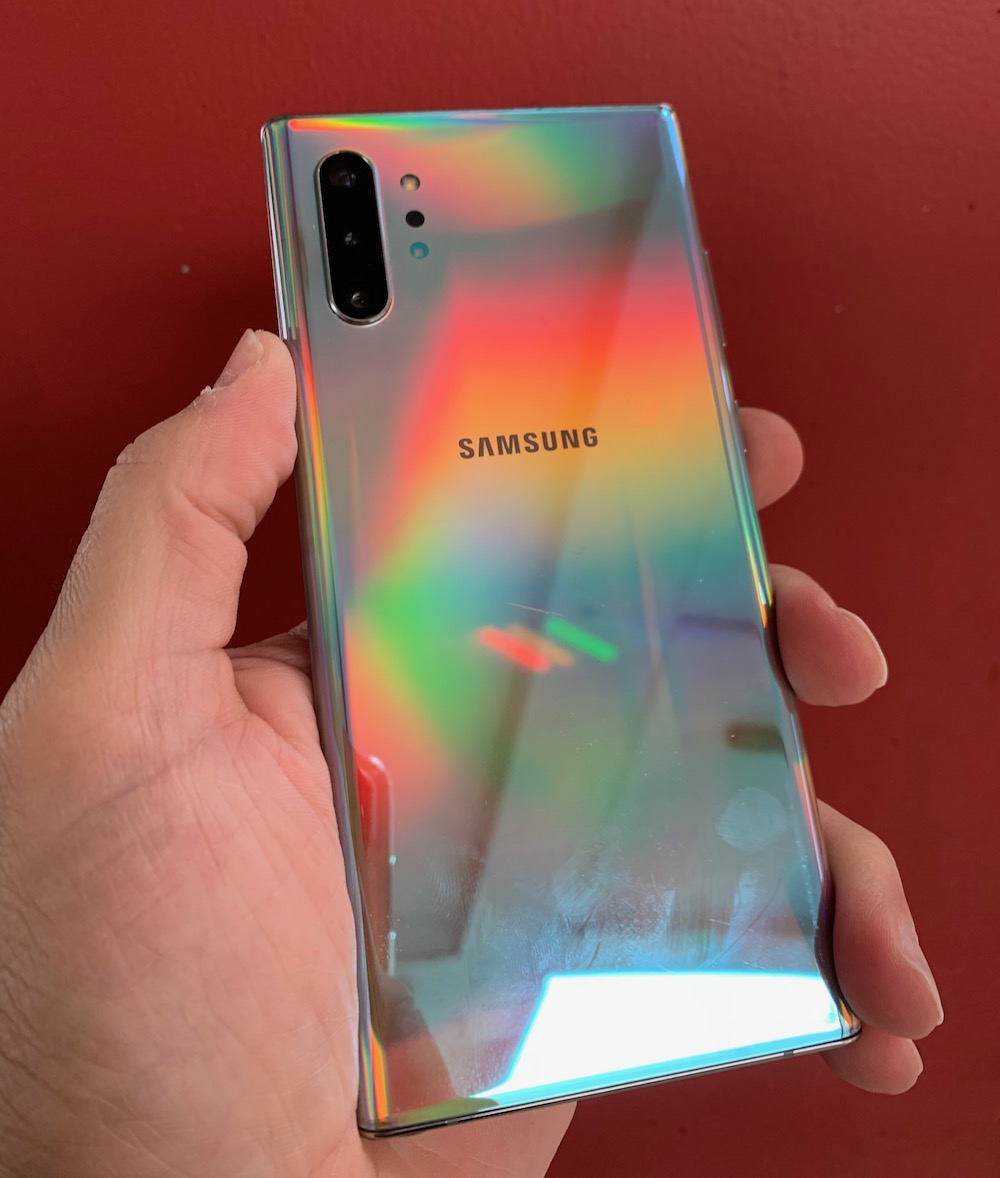 Note 10’s shape has also been improved with curved edges on the screen and on the back so it feels right in your hand.

Samsung has located the volume and power keys on the left edge of the Note 10 while the right edge is clean and clear.

Along the top is the SIM card tray while the bottom has the USB-C port, a speaker and the S Pen in its storage slot.

One thing you won’t see on the bottom edge is a headphone jack.

It’s the first time Samsung has deleted this feature but our thinking is a customer buying a device of this level will be well and truly embracing wireless connectivity for the headphones. If not, there is a pair of USB-C earphones in the box.

What will really catch your eye is the incredible new Aura Glow colour which offers a mirror-like finish that can also refract light and offer all the colours of the rainbow. 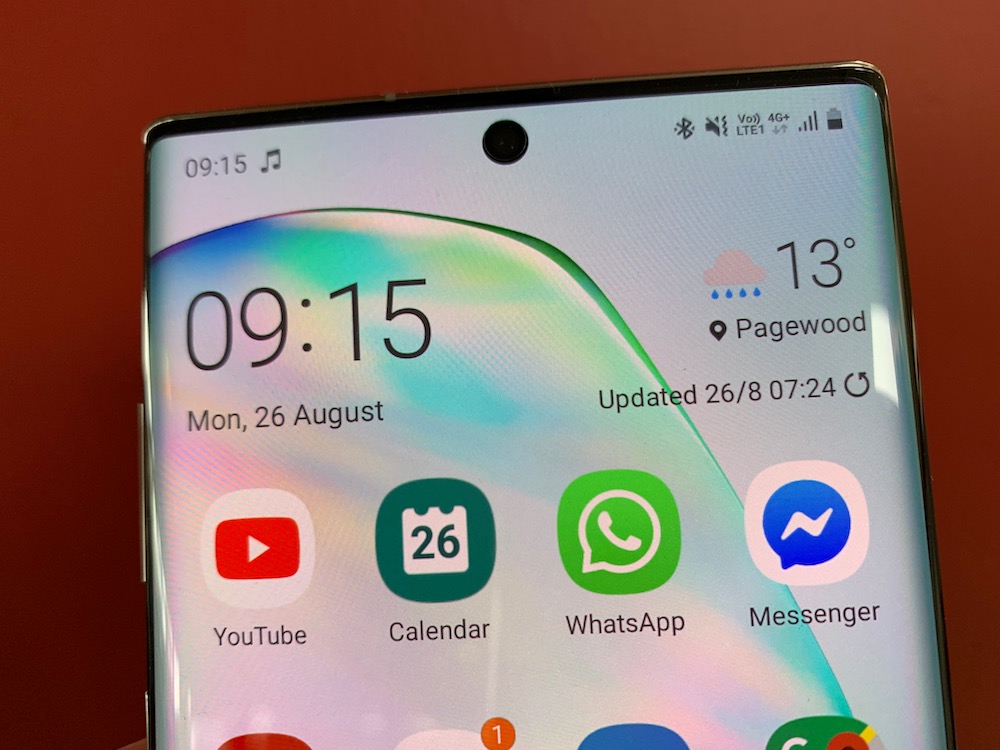 Just holding it in your hand and moving it as the light dances on its surface is truly hypnotic.

Memory can also be expanded through the microSD card section of the SIM card tray.

You immediately notice how smooth and fast the Note 10 operates. 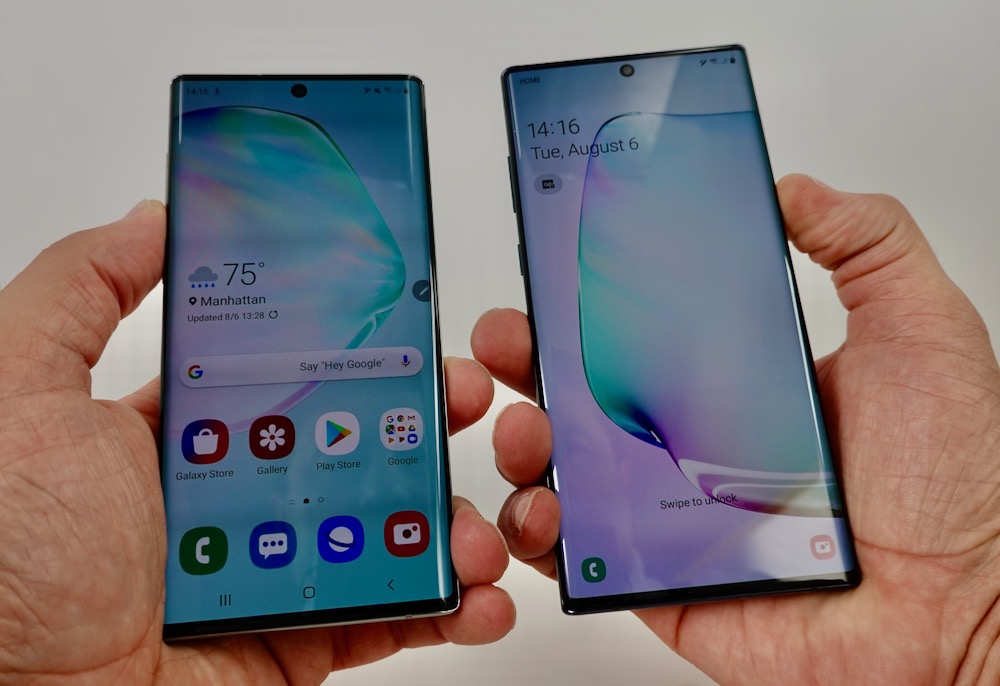 Multitasking is a breeze with this kind of power at your disposal. Switching between apps is effortless.

It is also powerful enough to play top shelf games on the device itself and to play that same game by connecting it to a television using an Xbox controller.

The experience is remarkable and actually hard to fathom it is running off the phone.

You’d be forgiven for thinking you were playing a dedicated gaming console.

The S Pen, the feature that defines the Note class of Samsung’s devices, has also been improved significantly.

It now has a unibody design as well as its own battery so can run for up to 10 hours on its own after just 10 minutes of charging inside its storage slot on the Note 10.

It also has a few more tricks up its sleeve including Air Actions and converting handwriting to digital text.

Air Actions basically means the S Pen can be turned into a mid-air mouse.

Previously the S Pen allowed some basic control like opening the camera and activating the shutter. 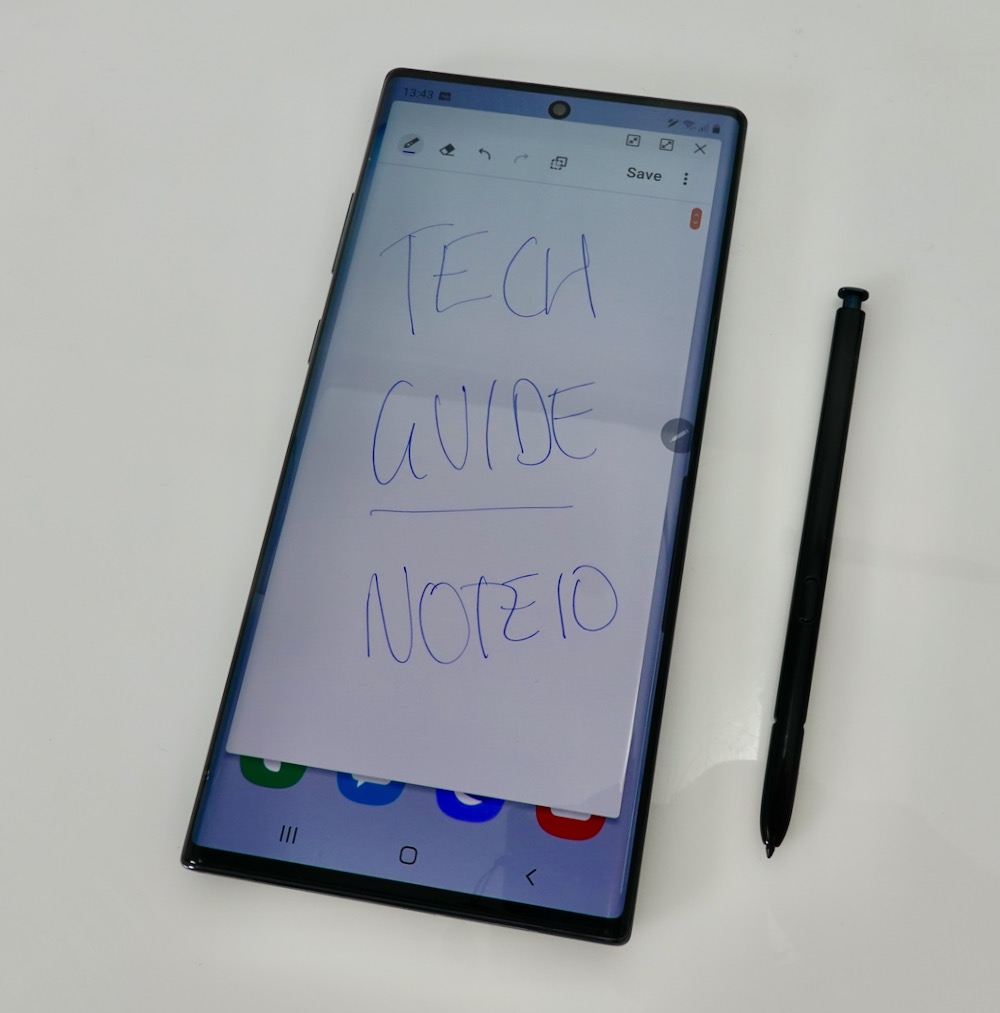 This time around it can do all of that and much more including scrolling through photo modes, changing between front and rear cameras and then taking the photo.

It can also, with a twist of the wrist, zoom in and out from your subject.

You can also navigate your media and scroll through your content with a flick of the wrist.

Initially we were unable to get the S Pen to work in Air Actions but we realised we were making these big sweeping actions when all that was required was small subtle gestures near the Note 10. 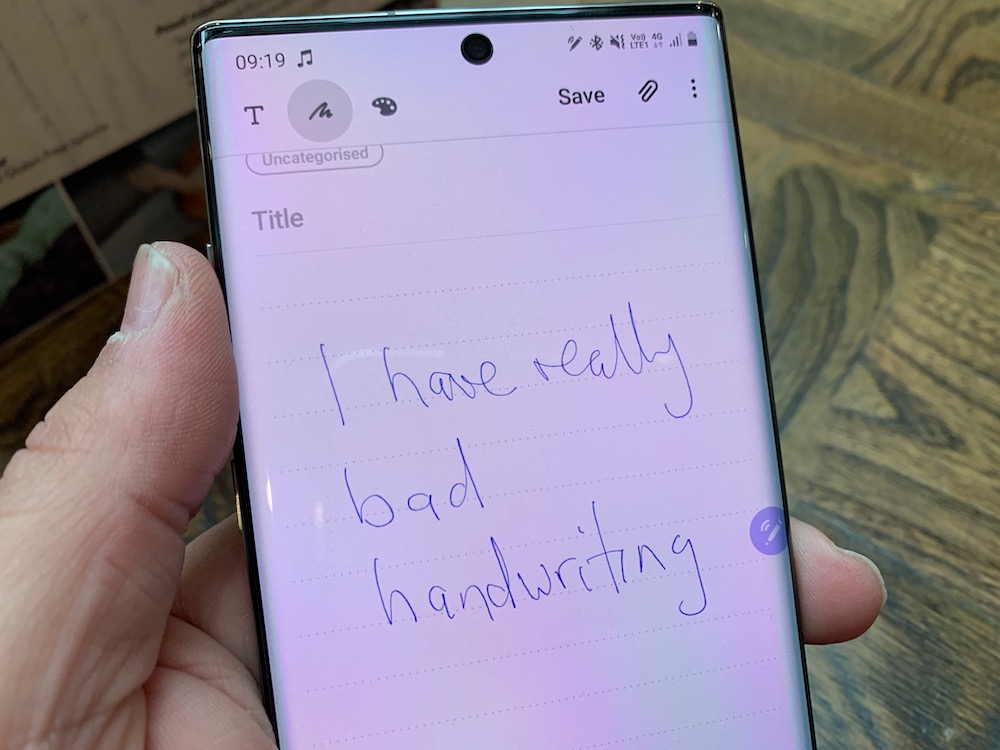 From here we were able to breeze through these gestures.

It comes in handy if you are making a presentation. 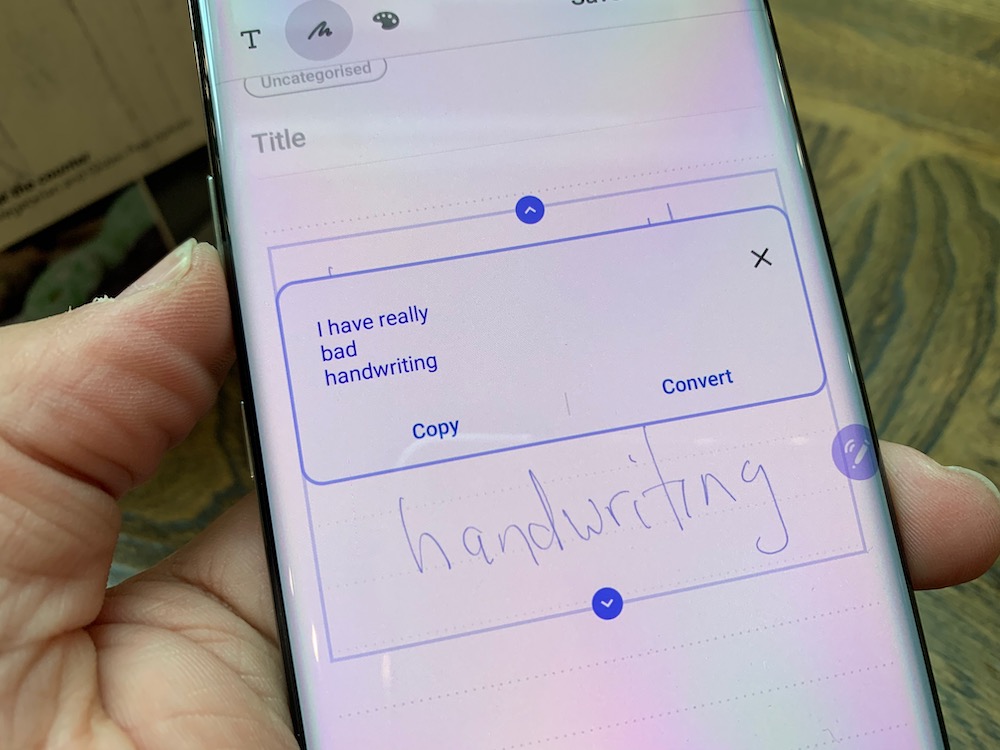 We also found it useful when we were showing other people images on our screen and could scroll through them without touching the display.

But the real strength of the S Pen is the ability to write and draw on the screen.

Hand written notes can now be converted to editable text with surprising accuracy. 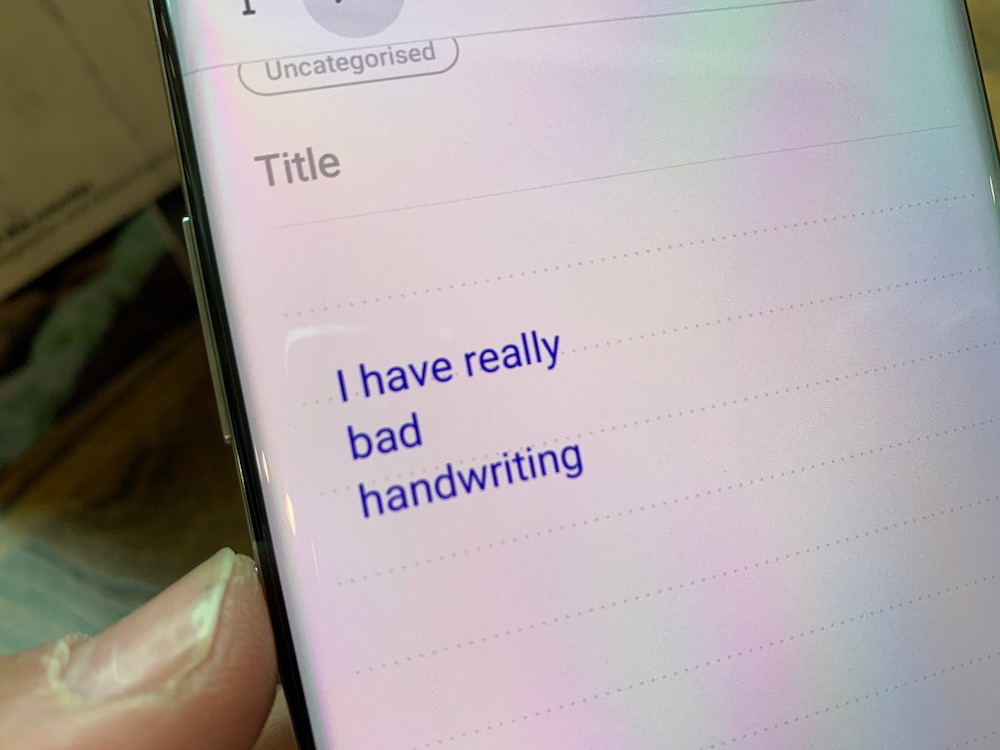 Our handwriting is nothing to write home about but the Note 10 could still make sense of it and convert it to text instantly.

Now you can share your hand written notes, perhaps the minutes of a meeting, with your colleagues as text.

You can save that text as a Word document or PDF to easily share.

The Samsung Galaxy Note 10 cameras are among the best on the market.

In fact, the Note 10 was recently rated by DxOMark is having the best front and rear cameras on a smartphone.

And we would have to agree. 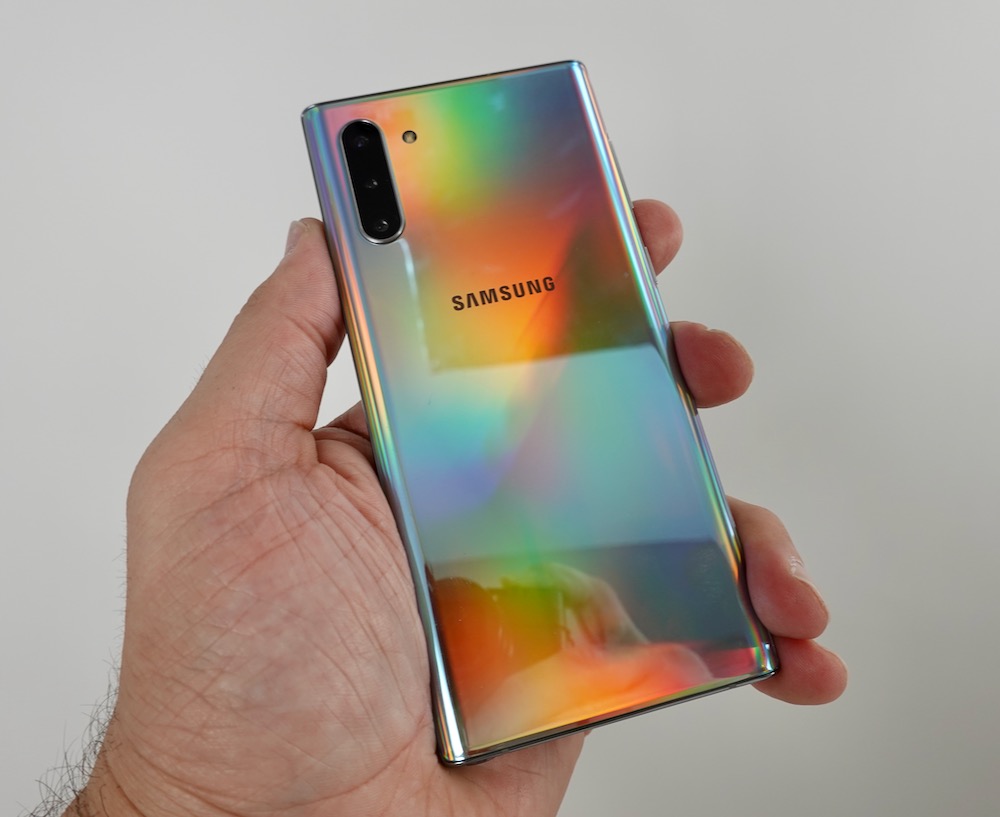 Not only does the device produce stunning images and videos, but also lets you do a lot with them.

We were using the Galaxy Note 10+ with its rear quad camera system that is made up of 16-megapixel ultrawide, 12-megapixel wide-angle and 12-megapixel photo along with a DepthVision camera – also known as a time of flight camera to judge the distance to the subject and create stunning bokeh effect images with amazing depth of field.

This feature is called Live Focus and works with the front and rear cameras.

The results are nothing short of spectacular with the ability to adjust the background blur and choose some stunning effects for your photos and videos including swirling and creating a velocity effect with the background.

Our favourite was the ability to isolate our subject in the foreground in colour and turn the background black-and-white. 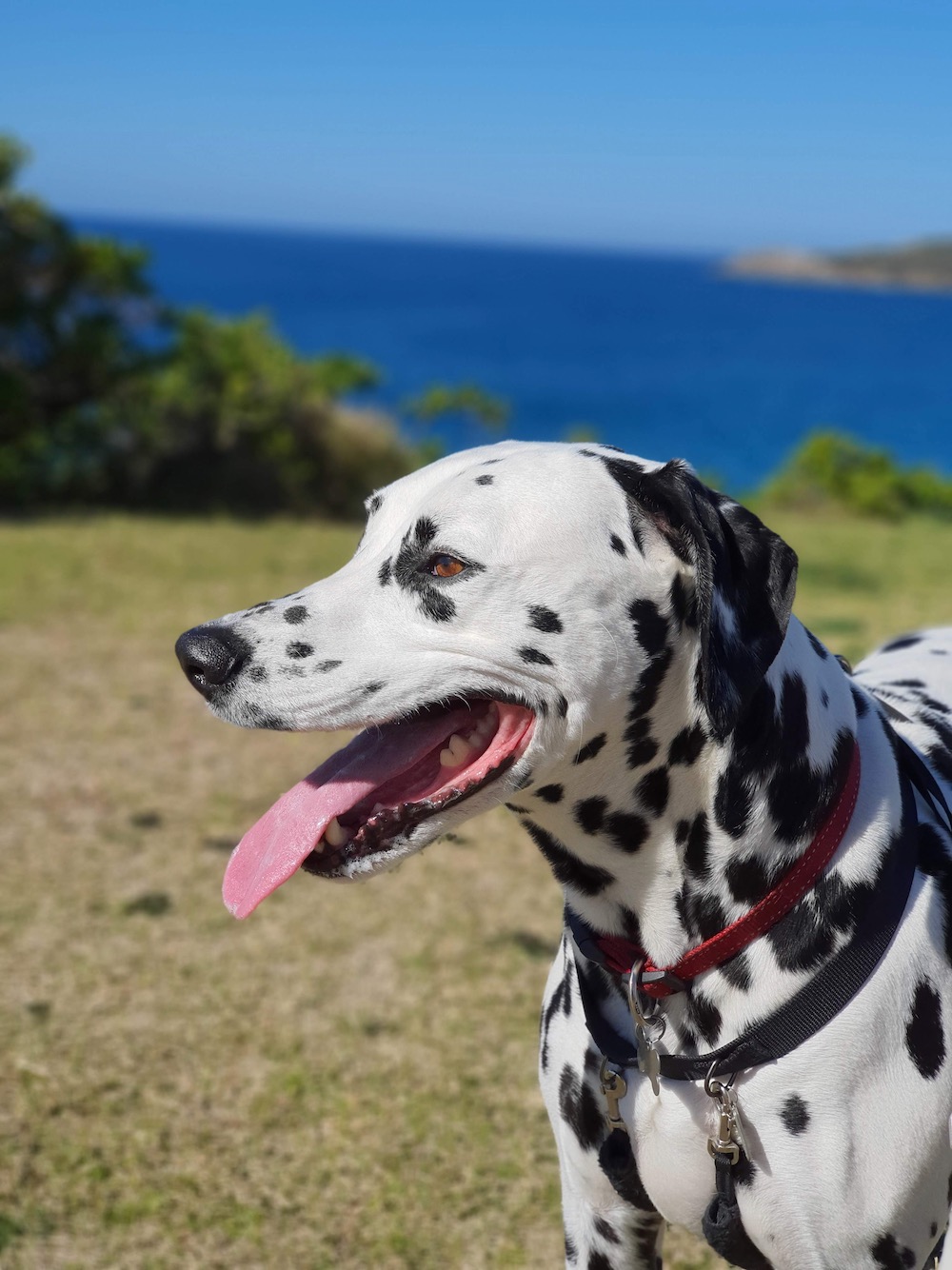 And also works with video which also offers several effects including a vintage filter that places some scratches and static to video.

Users have direct access to the three lenses to take regular, wide and ultrawide images with a single touch. 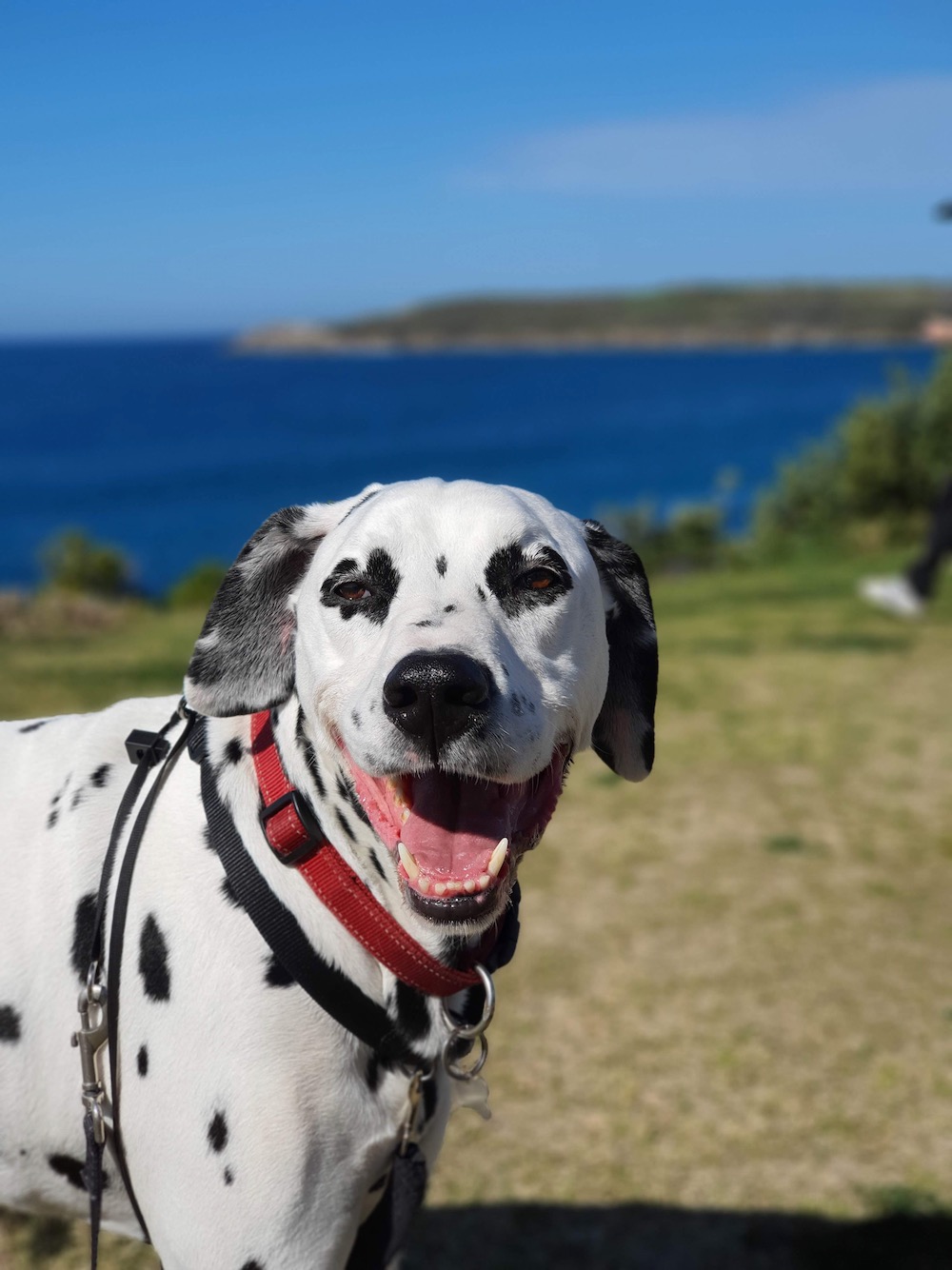 The front facing camera also offers a wider option to fit in more friends or more of your background. 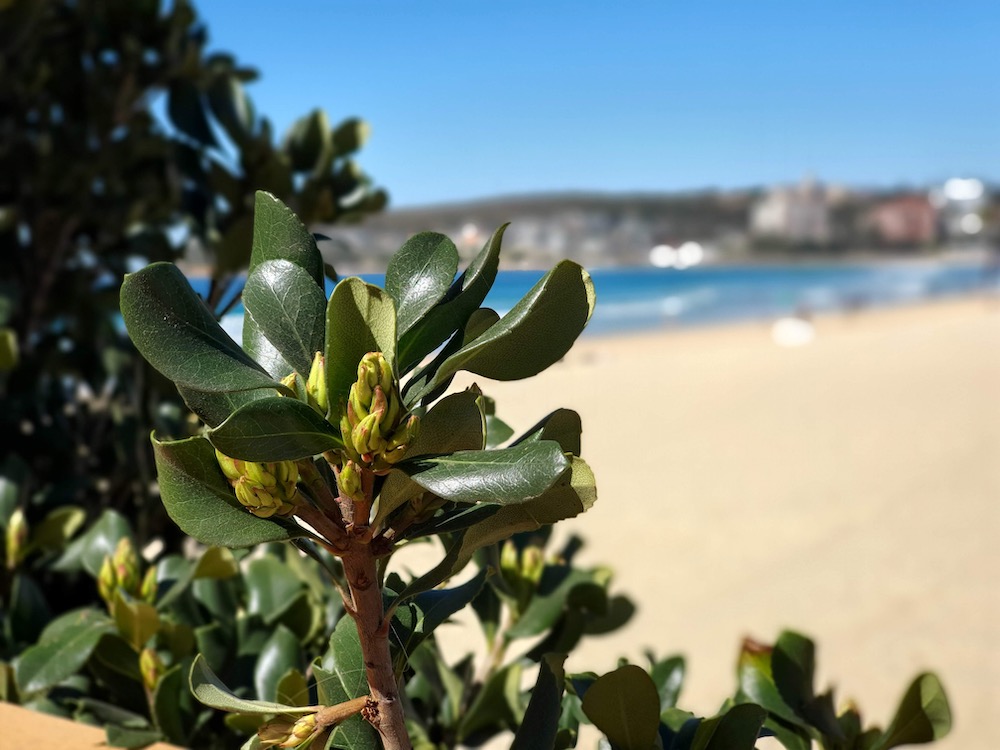 We haven’t seen better images produced by a smartphone.

Other cool new camera features include AR Doodle which will become, in time, a new art form.

Users are able to decorate a face and that person will be “wearing” whatever has been drawn even as they move in the frame. 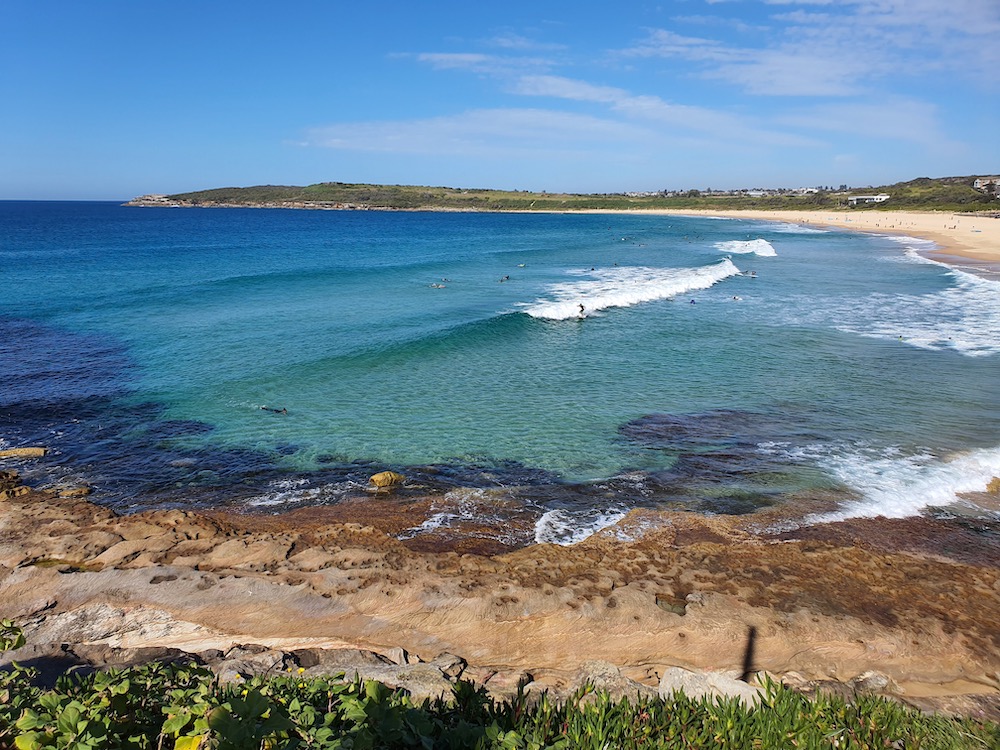 And you can record the whole process to share it.

You can also create amazing AR artwork in your immediate vicinity.

When you doodle and draw around you, you can walk around and inspect it from every angle and also share this whole process. 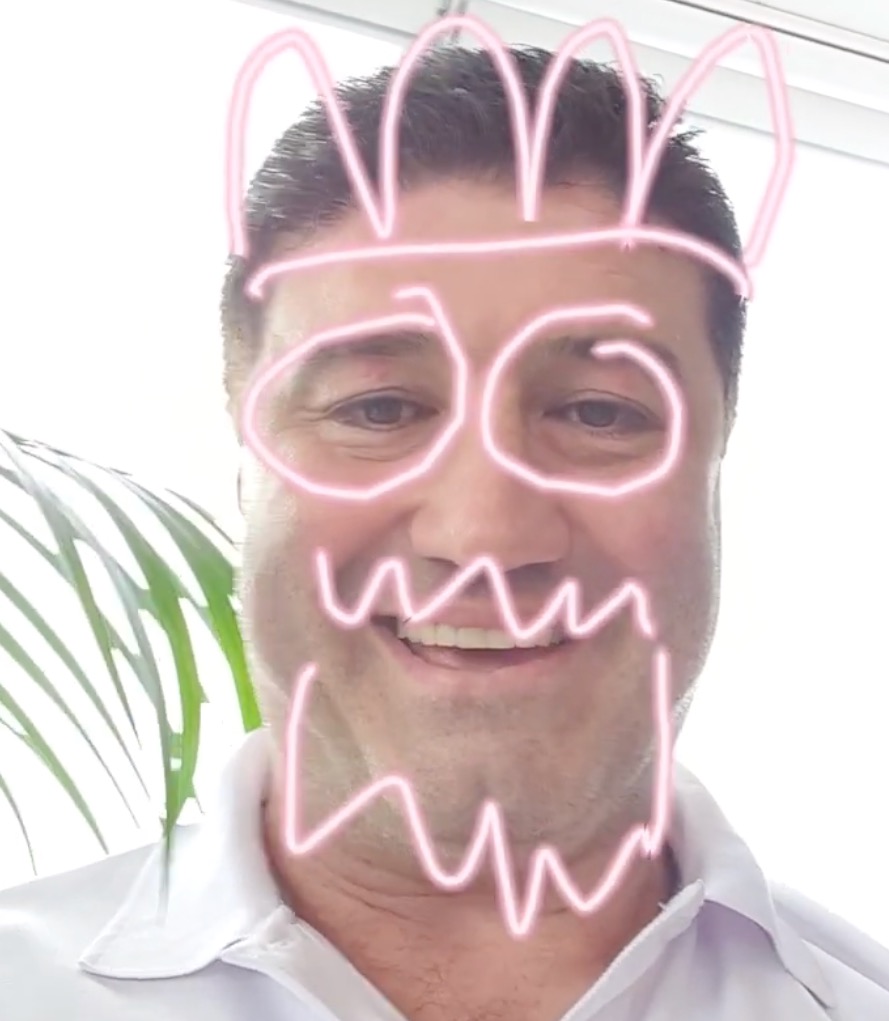 On the video side the Galaxy Note 10 has new stabilisation capabilities to take the shakes out of the footage which can now be shot in 4K at up to 60 frames per second.

Samsung has also made it easier to edit your videos with the native video editor which allows you to arrange your shots, change screen transition effects, insert text and drawings with the S Pen and even adjust the speed of the footage.

This makes video editing even easier on-the-fly and rivals the power and simplicity of the iMovie app which works on Apple’s iPhone and iPad.

DeX has gone to the next level with the Samsung Galaxy Note 10 and now makes it even more powerful.

Now users can connect to a PC or a Mac to allow them to access the content and files of this smartphone and even control the device using the computer’s mouse and keyboard. 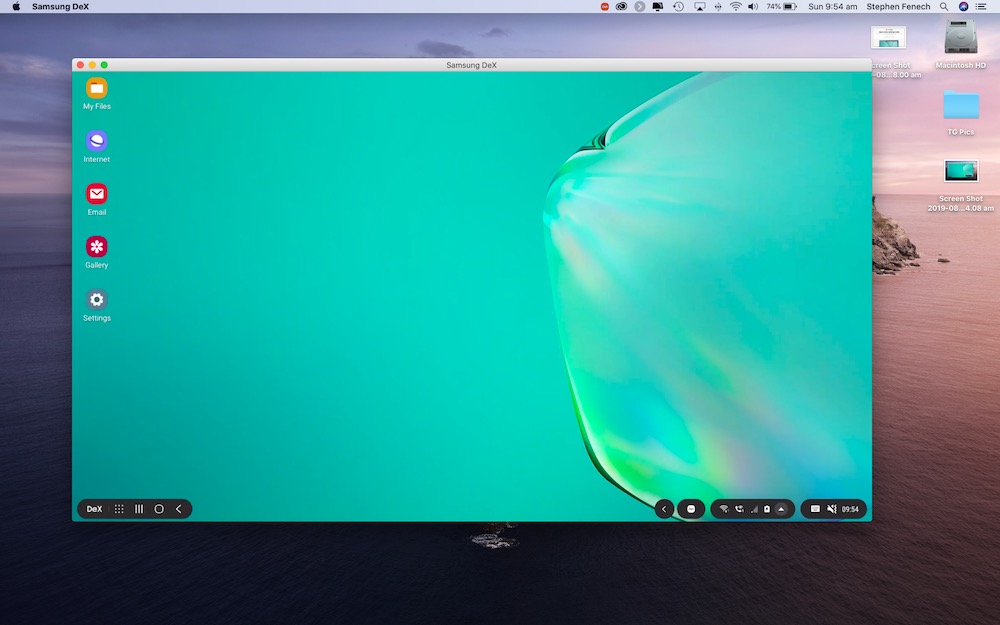 It’s also possible two drag-and-drop files as well as copy and paste text from the phone to your computer.

Users need to install the DeX app on their PC or Mac which will then become active when it detects the Note 10 connected to the computer with a USB-C cable.

There is a little bit of set up involved here but once completed you have this impressive new interface to extend the capability of the Note 10 from a smartphone to a computer.

We connected the Note 10 to our MacBook Pro and also our iMac and could operate the phone in its own window on a desktop.

This is yet another example over feature that a power user would most definitely take advantage of.

Now there’s no excuse to not stay productive on the go with files and apps from the Note 10.
BATTERY

The batteries work intelligently with the device to create a remarkable efficiency so you’re not left posted at the end of the day.

And what’s even better is the Super Fast Charging which allows you to juice up the battery faster than ever before. 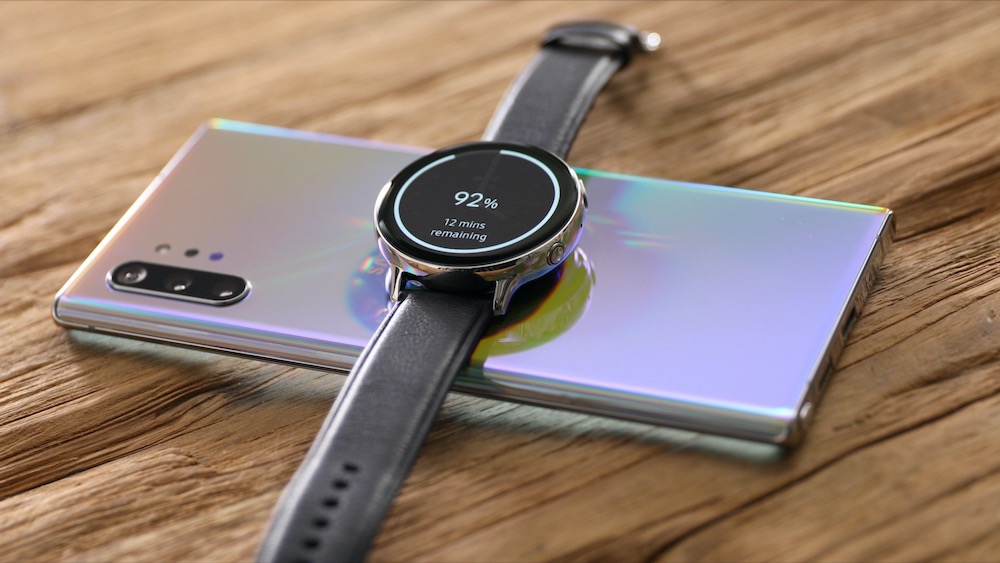 This means that in just 30 minutes you can grab enough charge that will help your battery run for a whole day.

And, if you’re feeling particularly generous, you also have Wireless PowerShare  which allows you to charge other Qi-enabled phones devices as well as your Galaxy Watch and Galaxy Buds.

The Samsung Galaxy Note 10 is a triumph of technology that can empower everyone from power users to artists and photographers and everyone in between. It is an incredible blend of design, power and performance. If there is a better smartphone on the market, we haven’t seen it.