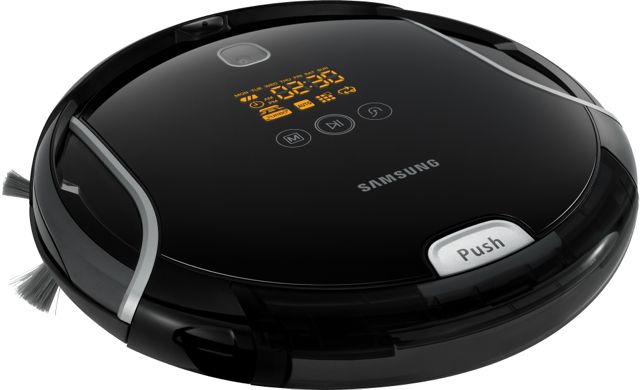 Samsung’s latest version of the product, the Navibot S SR8980, has a number of improvements over its predecessor.

One of the SR8980’s standout features is the Auto Dust Emptying function.

This new top-of-the-line model will return to the charge base when it senses its onboard dust container is nearly full.

When it docks itself again, the device will not only empty its dust container into the charge base’s two litre bin, it will also recharge and also clean its front brushes to remove pet hair and other dirt clinging to the bristles.

To navigate the carpets in your home the Navibot S uses an onboard camera and infrared sensors.

The camera captures 15 frames per second and tracks the shape of the ceiling to assist the sensors at the front and sides of the device to cover every possible accessible area of your carpet.

It can also avoid obstacles and also has a “cliff” sensor so the Navibot S won’t fall off edges or down stairs.

Included with the Navibot S are two virtual guards that create an invisible fence that the robot vacuum cleaner won’t cross in case the owner wants to prevent the device entering certain rooms and areas of the house.

And the intelligent device can also memorise its cleaning path to keep track of where it’s cleaned and also return to the exact spot where it left off to recharge or empty its dust container.

Also on board is the dust sensor so the device can recognise excess dust and debris in an area of the carpet and alter its program to concentrate on that zone.

uRemote home automation with an iPhone or iPad