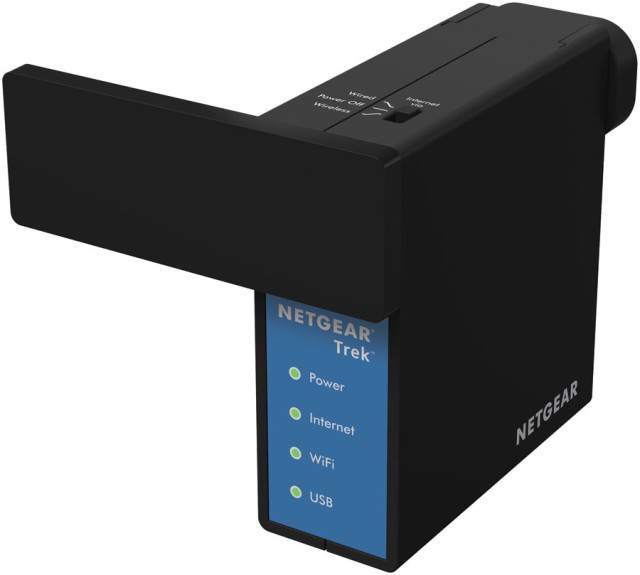 Frequent travellers know that staying connected on the go and in your hotel room is important and the new Netgear Trek makes that easier and safer.

The Netgear Trek N300 travel router is like a digital version of a Swiss Army knife because it has so many uses.

The device looks like a slightly larger charger with a plug on one side and a flip out antenna on the other.

On the bottom are two LAN (local area network) ports and a USB port.

The Netgear Trek draws its power when it is plugged into a power point. And even if you are nowhere near a wall socket you can also power the device using a microUSB cable that’s connected to your computer.

For travellers the Netgear Trek can create your own wi-fi network in your hotel room.

Rather than paying for multiple connections you can connect use the Trek to create a wi-fi hotspot from the room’s original connection.

Users connect either with a wire or a cable to hotel’s connection before creating your own network complete with a password so you can easily connect other devices like a smartphone, laptop or tablet.

There’s also a built-in firewall when you connect through the Netgear Trek so your new wi-fi hotspot is secure and private.

The device can also boost your wi-fi signal whether you’re in a café, in a hotel or in your home.

A switch on the top of the product can allow the Netgear Trek to connect to the internet with an Ethernet cable or with a wireless link.

Users can also set up the Netgear Trek as an access point in their home to create a network as well as connect devices like smart TVs and gaming consoles to your broadband network.

But the uses for the product doesn’t end there. The USB port on the bottom of the device means it can also double up as a charger for your smartphone or tablet.

Now you can travel even lighter and don’t need to remember all the chargers for your devices as long as you include the Netgear Trek.

The Netgear Trek N300 Travel Router and Range Extender is available now and is priced at $79.

Jawbone UP24 activity wristband now on sale in Australia

Samsung Galaxy S5 smartphone to go on sale on April 11