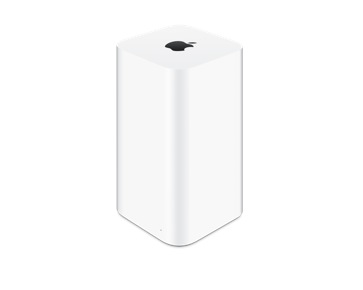 Apple’s new Airport Time Capsule has been significantly redesigned and re-invented inside and out and now adopts the faster 802.11ac wi-fi standard.

And it’s not just a router, the device is also a hard drive onboard that’s available in either 2TB or 3TB capacities.

Design-wise Apple threw the look of the previous Airport Time Capsule model out the window.

This time out Apple has created a mini pillar which is taller than the older model but now has a much smaller footprint on your desktop. It is 16.8cm wide and 9.8cm wide.

The top of the device is where you’ll find the antennas – there are six of them – three each for the 2.4Ghz and the 5Ghz frequencies.

And with 802.11ac wi-fi on board, the connection to compatible devices is three times faster than the previous 802.11n standard.

But it’s also backwards compatible and still offers a solid wireless connection to your existing wi-fi products like computers, smartphones and tablets.

We created an 802.11ac to 802.11ac connection using the Airport Time Capsule and the latest 13-inch MacBook Air and put it up against a 15-inch MacBook Pro with Retina Display which is running 802.11n.

The MacBook Air – with the 802.11ac connection – downloaded the file in 42 seconds while the 802.11n connected MacBook Pro took two minutes and 22 seconds.

The faster connection of 802.11ac is aided by beam-forming technology.

This means the Airport Time Capsule knows where the wireless devices are within its range and creates a direct connection rather than emitting the same signal in all directions.

On the back of the Airport Time Capsule are three Gigabit Ethernet LAN ports to connect to other network devices like a Blu-ray Disc player or gaming console, a Gigibit Ethernet WAN port that connects to your modem and a USB port to connect a printer or an additional hard drive to your network.

There’s already a hard drive aboard the device that can be used as your Time Machine backup for not one Mac computer – but all of the Macs in your home – and it’s all done wirelessly.

After connecting your ADSL or cable modem to the Airport Time Capsule, set-up is a breeze with a software assistant that takes you step by step of the process.

Here you can set up your own name for the device and create your own password for added security.

It’s also possible to set up a separate network for a guest with the option of having a password or no password at all.

The Airport Time Capsule has a built-in firewall as well to protect your network from outside attacks. This is activated automatically during set up so there’s nothing else you need to do and no other settings to adjust.

Speaking of settings it is also possible to manage your wi-fi network and the Airport Time Capsule from an iPad or an iPhone with the Airport Utility App.

Unfortunately users can’t wireless access or stream the contents of the Airport Time Capsule’s internal hard drive using the app to the iPhone or iPad.

Within your network other computers can see the Airport Time Capsule as another network device and also access and view the contents of the hard drive.

The Airport Time Capsule is a big improvement over the previous version and covers two functions in one device – providing the fastest wi-fi connection and a hard drive to back up the computers on your network and allow access to shared files.

Not every device has 802.11ac on board, which is required to enjoy the faster wi-fi speeds, but they are starting to appear on the market which makes the Airport Time Capsule future proof for many years to come.