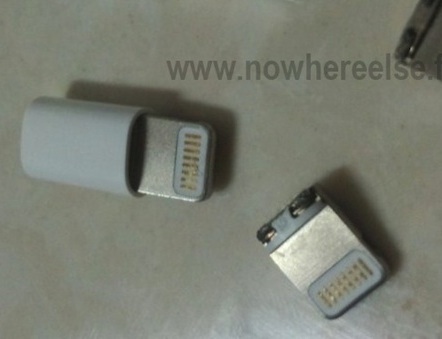 More images of leaked parts alleged to be those from the upcoming iPhone 5 have appeared online including the controversial new dock connector.

Many of the rumours about Apple’s new iPhone are centred around the fact the device will do away with the traditional 30-pin dock connecter and replace it with a smaller 8-pin connector.

French site nowherelse.fr has run a number of photos of leaked parts in the past which are thought to be from the next generation iPhone.

In its latest images we can see a traditional USB plug side by side with the alleged new dock connector plug that clearly shows the 8 gold pins which would correspond with the new port.

There was earlier speculation the smaller dock could be a 9-pin connector which brought the images shown on nowherelse.fr into question.

But iFixit says the metal frame of the plug acts as a grounding pin which means the plug, despite only having 8 gold contacts, is actually a 9-pin connector.

If Apple does actually go ahead and include the smaller connector with its latest iPhone it will mean the thousands of existing dock products compatible with Apple’s products won’t fit the new iPhone.

There have been suggestions the smaller dock connector could also be adopted through the entire line of Apple’s mobile products.

If this is the case existing third party products designed to work with Apple’s existing range of devices will require an adaptor for the new iPhone until the next generation of docks are manufactured.

September 12 is the day which has been identified as the likely date of an Apple media event in San Francisco which could see the iPhone 5 unveiled along with possibly 7-inch iPad.