The McGrath Foundation has launched a groundbreaking new online cricket tournament as a way to raise money for charity on a scale not yet seen in Australia.

The McGrath Foundation Digital Cup is an online cricket tournament that can be played on smartphones, tablets and computers and is designed to bring gamification to fundraising.

With the huge growth in devices and the explosion in online gaming, the McGrath Foundation Digital is hoping to put the fun in fundraising.

More than 93 per cent of Australian households own at least one device for playing games while eight in 10 parents admit to playing games with women making up almost half of the population of gamers. 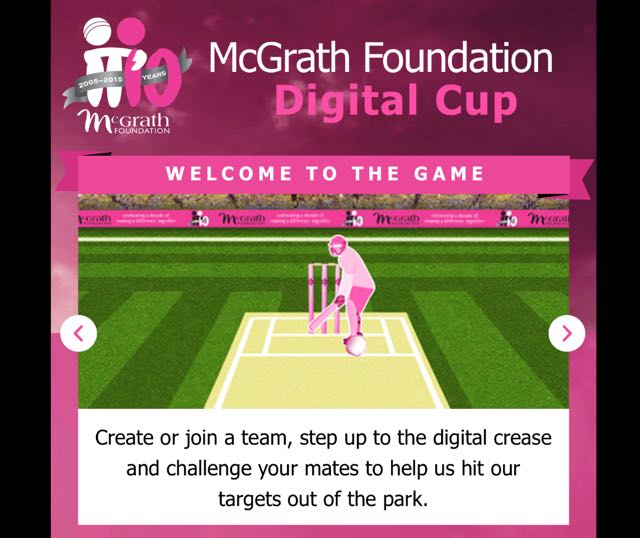 “At the McGrath Foundation we don’t just like cricket, we love it! So, in our tenth anniversary year it’s exciting to be extending our cricket heritage with an awesome, online cricket tournament that anyone can play,” said McGrath Foundation Co-founder and President, Glenn McGrath.

“I’m encouraging everyone to join me in stepping up to the digital crease for a chance to win great prizes, while raising funds for the McGrath Foundation.”

To play the game simply log in to www.mfdigitalcup.com.au and create a team.

You can invite others to play the online cricket game and be in the running to win prizes.

Users can sign up to play through Facebook and also invite their friends through the social media site.

Once you’ve created your team you can play against your mates and other teams from across the country.

Everyone who takes part gets a chance to bat, bowl and field as a player or coach. It will cost a $10 donation to play or $30 to be a team coach.

Sign up before February 13 for unlimited pre-match practice before the official tournament kicks off on February 14 and runs until February 28.

2015 is the tenth anniversary of the McGrath Foundation which has a goal to increase the number of McGrath Breast Care Nurses to 110 to support 10,000 families through breast cancer.