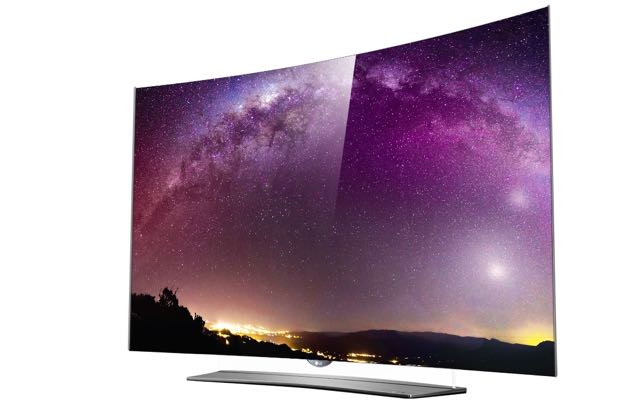 There is no other place outside the International Consumer Electronics Show in Las Vegas where you get to see the TV wars up close.

It’s not just the brands going head to head but also the TV formats that are fighting to gain customer support.

Over the years we’ve seen plasma, LCD and, more recently, LED emerge as the dominant format.

But in a town like Vegas where fortunes are made and lost with a bold gamble, LG has this year put its chips down on OLED (organic light emitting diode) as the way forward for television.

The bulk of LG’s TV offerings unveiled at CES this year were not only OLED but also 4K Ultra High Definition which makes for an even higher quality combination.

LG seems to have cracked the code when it comes to mass production of 4K Ultra HD OLED panels. Its 2015 line-up will include flat, curved and flexible OLED models in 55-inch, 65-inch and 77-inch sizes.

OLED offers many advantages over LED and LCD. For a start, OLED is a carbon-based substance that creates its own light when a charge is passed through it and doesn’t need a backlight like LCD and LED.

This means OLED TVs are slim and use a lot less power.

The other big plus is that OLED can provide unbeatable black because a pixel is either on or off. And when it’s off there’s no light unlike an LED or LCD screen which has a constant light source even behind the pixels even when they are turned off.

OLED can also produce near perfect colour and clarity that are superior to the quality seen on other TV formats.

But OLED is not new – we first saw it at CES in 2007 when Sony unveiled an 11-inch model which, at the time, was priced at the same level as a 50-inch plasma TV.

The reason for the high price was because the technology was in its infancy and was costly and tricky to manufacture.

Any new technology comes at a premium until the manufacturing process is developed to the point where efficiencies and yield rates improve.

It’s for this reason that plasma TVs, when they first became available for consumers in the late 90s, were priced at more than $30,000 and would eventually drop to below $1000.

We’re seeing a similar thing happening with OLED. Every major TV manufacturer has flirted with OLED at one point, including Sony and Samsung.

Two years ago at CES, Samsung and LG unveiled 55-inch full high definition curved OLED TVs that were priced at more than $10,000 when they were released in Australia.

But while Samsung has put plans for OLED in its TV range on hold, LG has held course and decided to invest further in the OLED TV space.

Samsung decided instead to use OLED in its hugely successful line of Galaxy smartphones, tablets and smartwatches.

Sony and Panasonic announced a joint venture to work together to produce small and medium sized OLED displays for smartphones and tablets.

Ironically LG still uses LCD for most of its mobile devices but has introduced Plastic OLED (P-OLED) panels for its G Flex and G Flex 2 curved smartphones and the G Watch R.

Don’t be surprised to see OLED panels in the future replace entire walls in our homes or rolled down from the ceiling. That’s the sort of flexibility and potential the technology offers.

Here at CES, LG has devoted the most space to large display OLED televisions on its stand including curved screens for a more immersive viewing experience.

What we’re now seeing with Samsung and other TV manufacturers is Quantum Dot technology – an improvement to the LED pixels that can increase brightness and colour range.

For these companies, Quantum Dot represents a lower cost way to get even higher picture quality because it is a development of an existing technology.

Over at LG, OLED production has been going from strength to strength with higher yield rates which is the percentage of panels that work right off the production line.

LG is reportedly running at more than 70 per cent yield rate and that has opened the door for a massive OLED push in 2015.

Two years ago that figure was 10 per cent for most companies which is why OLED TVs were roughly the same price as a small car.

But now LG is in a position to offer the higher quality that OLED brings at a price that puts it within reach of everyday consumers instead of just people with a trust fund.

Since dropping the price on its 55-inch curved high definition OLED TV last year, LG has seen even wider distribution and, as a result, the OLED category has exploded.

In fact, that LG OLED TV was outselling many of its Ultra High Definition models.

It won’t take customers long to see the difference between OLED and LED/LCD if they are side by side in stores.

Any customer wanting to make an investment with a product they’re going to be looking at everyday will certainly be doing their homework.

OLED can already deliver quality and style. If LG can also deliver on the price with this year’s range then the gamble is going to pay off handsomely.