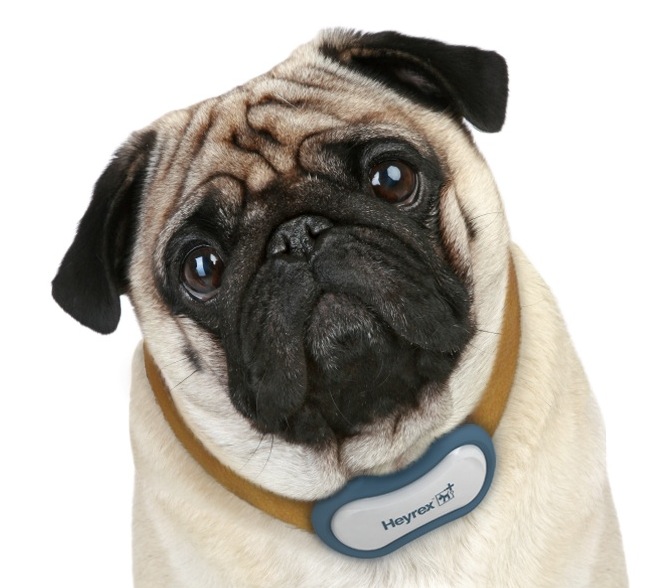 Heyrex is an activity and health tracker for your dog

Activity monitors like Jawbone UP, FitBit, Shine are all the rage but imagine if there was one for your dog so they could let you know how they’re feeling?

Well now there is and it’s called Heyrex and, like these human activity trackers, can provide vital information about your dog.

Owners will be able to tell if their dog is getting enough sleep or too much, whether it has an itch and even if its joints are aching.

The device can tell when your dog is exercising, resting, sleeping or scratching.

Described as Doctor Doolittle on a dog collar, Heyrex was invented and developed in New Zealand and is now available for purchase.

Heyrex is a small waterproof biosensor that fits on the dog’s collar that can capture data and transmit it to your smartphone or computer where you can access an analytic dashboard.

This dashboard can be used to assess changes in your dog’s behaviour and identify out-of-character activities.

These could be signs of potentially life-threatening disorders like degenerative joint disease, cardiac conditions and behavioural disorders.

The Heyrex solution can even link to a local vet or animal hospital so they can assess your dog’s behaviour as well.

Heyrex has a six-month battery on board so owners can get consistent and more personalised readings over a longer period.

The product has been in development for seven years by inventor New Zealander David Gibson who sadly passed away in 2011.

“We’re honoured to have finally been able to bring his vision to life,” Mr Lawrence said.

“In today’s fast-paced world, a change in your dog’s behaviour can go unnoticed – that’s why we came up with Heyrex.

“It will keep a watchful eye on your dog at those times of the day you can’t be by his side.”

Heyrex will allow owners to monitor their dog from anywhere in the world and change the relationship they have with their furry friend.

Heyrex is priced at $US99 along with $US5 a month for the subscription to the monitoring and graph service.

There is also a Heyrex for Life Starter kit for $US149 which provides access to the monitoring and graph service for life.

Jawbone UP – the bracelet that tracks your health and wellbeing