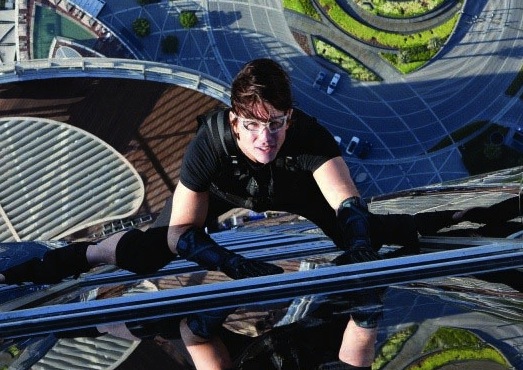 The fantastic gadgets seen in Mission Impossible: Ghost Protocol are incredible but just how close to possible are these fictional products.

In Mission Impossible: Ghost Protocol – the latest film starring Tom Cruise which has just been released on Blu-ray and DVD – our heroes are packing some impressive technology.

There are contact lenses with a built-in HUD (Heads Up Display), gloves that can grip vertical surfaces like Spiderman, a magnetic levitation suit and a BMW brimming with stunning features.

But just how close to reality are they?

In the opening scene, agent Trevor Hanaway (played by Josh Holloway) sports a pair of contact lenses with a difference.

They have a Heads Up Display (HUD) which shows information across your line of vision.

Now this is nothing new for glass screens but getting that technology above your eyeball on a contact lens is a completely different proposition.

Extreme Tech revealed a team of Finnish and US engineers has actually come up with a wearable contact lens which has embedded an antenna, radio receiver and LED display.

The downside is you need a power source nearby – a battery pack hooked over your ear – which connects to the lens’s antenna using similar technology to NFC (near field communication).

In the film, the gloves create a Spiderman-like grip on the side of building.

In reality that really was Tom Cruise hanging off the side of the actual building but he was attached to several harnesses.

The technology to make these gloves a reality is not that far away.

It’s called electro adhesion and a company called SRI International is developing it.

Electro adhesive ability is a little like the static effect of rubbing a balloon on your hair to create static and then sticking it to a wall.

But instead of a balloon, SRI International, which has already been granted a patent for the technology, uses small robots to test it.

In the film William Brandt (played by Jeremy Renner) is rigged up in a magnetic levitation suit so he can float through some tight passages to plant a device.

Magnetic levitation is technology that already exists and is used to levitate objects much heavier than a person.

The only downside for a magnetic levitation suit would be keeping it cool.

To achieve an electromagnetic driven levitation you need a superconductor which needs extreme coolant to keep it from over heating.

NASA has actually levitated a mouse inside a tiny canister using magnets to simulate weightlessness and space travel.

The BMW i8 seen in Mission Impossible: Ghost Protocol actually goes into production at the end of 2013.

But whether it has all of the bells and whistles of the film’s car is yet to be seen.

There’s a full colour Heads Up Display (HUD) with gesture controls and a GPS navigation system that projects onto the windscreen.

HUD is already an in-car reality while gesture controls were on display at the Consumer Electronics Show with a concept Mercedes Benz and Audi.

The only issue would be whether a driver could still concentrate on the road and make gestures at the same time.

GPS systems are already in cars and all they need to do is move half a metre to the windscreen.

But again it is a case of keeping the driver’s attention on the road and not putting something in front of them, like a map, which would make them shift their focus from the road.

The gadgets in Mission Impossible: Ghost Protocol might be the stuff of fantasy today but there are strong signs they could well be the products of reality tomorrow.