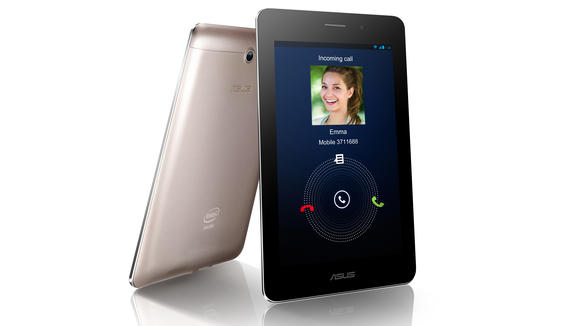 The new ASUS Fonepad is a 7-inch tablet with a difference – it has built-in 3G connectivity and can even make voice calls in the go.

The Intel Atom -powered device will be priced from $329 when it goes on sale in Australia in early June.

The device weighs just 340g and is 10.4mm thick and is powered by the Intel Atom Z2420 processor.

It is available with 8GB and 32GB of internal memory and has a micro SIM card slot. It also has an SD card slot to expand the memory even further.

With the addition of telephone features to go along with 3G data connectivity – the ASUS Fonepad has virtually the identical functionality as a smartphone but is limited to 3G and unable to connect to the newer 4G networks.

And having SIM card on board means the device can always be connected wherever you go to give you larger screen access to the internet and email as well as social networking sites, apps and games.

The display has 1280 x 800 resolution as well as 10-point multi-touch so more than one person can use the touchscreen at once while playing games or collaborating on the same document.

Episode 114 of Two Blokes Talking Tech for your listening pleasure