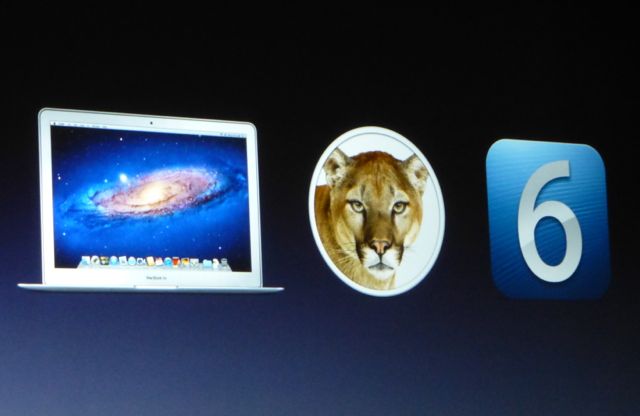 There might not have been a new iPhone at the Worldwide Developer Conference but Apple did introduce a new super slim MacBook Pro and a host of software improvements for the iPhone, iPad and Mac computers.

Apple CEO Tim Cook took the stage to kick off proceedings in San Francisco and made some stunning announcements including a new thinner 15-inch MacBook Pro with Retina Display along with a host of software improvements with the new iOS 6 and Mountain Lion operating systems.

Cook spoke about the stunning growth of the App Store.

Today it has 400 million accounts with credit cards – the largest store on the planet – and with more than 650,000 apps.

There are more than 225,000 which have been created just for the iPad.

The App Store will add another 32 countries to take the total to 155 countries where the latest apps can be sold.

On the hardware side the new 15-inch MacBook Pro with Retina Display stole the show.

There were also updates of the current MacBook Air and MacBook Pro range which will all feature Intel’s new third generation Ivy Bridge processors.

The new iPhone didn’t materialise but the software running the device along with the iPad and iPod Touch – iOS 6 – has some impressive improvements.

The software enhancements for iOS include improvements to Siri which will now make its debut on the new iPad with iOS 6.

Siri has some new features in iOS 6 including finding out sport scores and even individual player stats. This was demonstrated with football, baseball and basketball questions about matches and players.

Siri will also be able to search for restaurants based on ratings and the delivered information includes menu prices and maps.

On the movie side, Siri is also a buff. In iOS 6 Siri will allow users to find movies and session times and will include reviews and the ability to watch trailers on your device.

Siri can also launch apps just with your voice to make it easy to get to your favourite without having to scroll through screens of apps.

Apple is also working with auto manufacturers including Mercedes Benz and BMW to incorporate Eyes Free – a feature that can tap into Siri without taking your eyes off the road.

The App Store will also have a Facebook element with the ability to like apps and to see what apps your friends are using.

Facebook events and birthdays will also appear in the iPhone and iPad calendar in iOS 6.

On the phone side, users now have the option to answer a call with a message or to set a reminder to call that person back either by time or when you leave your current location.

Do Not Disturb allows users to still receive messages and calls without the screen being activated. Users can also choose what calls they choose to receive.

FaceTime has also been updated with the ability make and receive FaceTime calls – previously only on wi-fi – over cellular networks.

The mobile Safari browser has been upgraded in iOS to support iCloud tabs, to access the same sites on all your devices, plus Reading List, to read your favourite stories offline, and the ability to upload photos right from within the browser.

Photo Stream has been one of the more popular iCloud to get all your photos to all of your devices.

Mail has new VIP feature which can identify important contacts and messages and display them in the lock screen.

It’s also easier to add photos and video from within a message.

Passbook is a brand new app to get all of your passes in one place including the growing number of things like boarding passes, store passes and movie tickets.

Passbook takes them all and combines them in one place rather than having to search through individual apps.

Passes are also displayed based on location so if you’re near the airport your boarding pass will appear in your lock screen.

Apple has abandoned Google maps and rebuilt its own mapping solution from the ground up for iOS 6.

It has updated local listings for countries around the world along with real-time crowd-sourced traffic information.

There will also be built-in turn-by-turn navigation which can take traffic conditions into account and offer detours.

New Apple maps also integrate with Siri so users can speak to the device and ask for directions.

Another feature of Maps is Flyover which offers a 3D map view and satellite view.

The feature was demonstrated with the Sydney Opera House on the stage and showed a complete 360 degree view and views back towards the city.

On the desktop there are several changes, improvements and new features introduced for the upcoming Mountain Lion operating system.

Just like the iPhone, iPad and iPod Touch, iMessage will be introduced to the desktop with Mountain Lion.

iMessages can be exchanged between all of these mobile devices and Macs running Mountain Lion.

And they can be used to send pictures and videos to other Macs with iMessage and other iOS mobile devices.

These are already a popular feature of Apple’s mobile devices and will now be accessible through the Mac using iCloud.

Users can also pin important notes to their desktop and access any Note on any device.

Another mobile feature that’s made it to the desktop is Notification Centre and it offers banners and tags that slide in elegantly from the top of the screen.

If you’re working on something they can slip away again and become accessible from the Notification Centre which can slide in from the right side of the screen with a right to left swipe of the trackpad.

Now you can talk to your Mac instead of typing with Dictation. Wherever you need to type – a document, update Facebook, post a tweet, write an email – can now be completed using your voice.

Also introduced was enhanced sharing directly from the OS X to Twitter, Facebook and Flickr as well as sharing links to social networks directly out of the Safari browser.

Users can also tweet right from their apps and also post to your Facebook page right from the Mountain Lion operating system so sharing has never been easier or more streamlined.

Airplay Mirroring will allow Mountain Lion users to send whatever is showing in their screen to a TV or projector via Apple TV to make presentations, movies and pictures now even easier to share.

Speaking of Safari, Mountain Lion’s version of the popular browser will have faster speeds and improved search functionality.

Power Nap is a new Mountain Lion feature which can perform all app updates and back-ups even when the Mac is sleeping.

Even while updating in this mode there are no sounds, lights or fans to disturb the user.

And when the Mac wakes up again it is ready to get to work.

Game Centre will be included on the Mac to enable Mountain Lion users to take on other players whether they are on a Mac or iOS device.

On the hardware side Apple also announced a refresh of their MacBook Air and MacBook Pro range.

MacBook Air will have the latest third generation Ivy Bridge Intel processors which can take up to 8GB of RAM.

There will be up to 512TB of SSD storage onboard which will be twice as fast as the previous version.

The MacBook Air will also have USB 3.0 and USB 2.0 through a single port. The FaceTime camera has also been upgraded to HD.

The new MacBook Air and MacBook Pro range are available now and start at $1,099 and $1,349 respectively.