There are drones and then there are drones. The drones we’re used to seeing are small and used mainly for photography but we saw the next generation of drones at the Consumer Electronics Show in Las Vegas.

Two in particular caught our eye at CES – and they were the biggest drones we’ve ever seen.

One was the AEE F600 which has a wingspan of 1.65m, and the other was the Ehang 184 which can actually carry a passenger.

These drones were located in the South Hall at the Las Vegas Convention Centre which this year had an expanded area for drones that was easily four to five times bigger than the previous show.

This monster drone means business with solid construction and enough power to carry a payload weighing up to 10kg.

The AEE F600 has a flight range of up to 10km with the ability to transmit full high definition across that distance as well.

So what can you use a drone of this size for?

The suggested uses in the company’s brochure that we picked up at CES include law enforcement, frontier defence, fire fighting/emergency rescue, security and supervision, real estate exploration, TV and movie production and events recording. 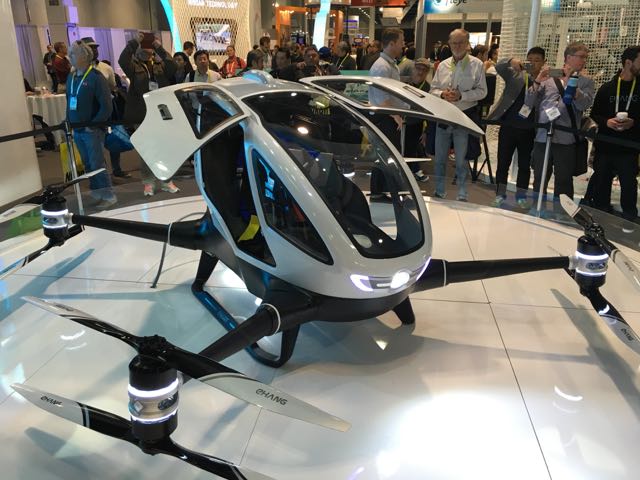 The Ehang 184 has more in common with a helicopter than a drone.

This is one drone you don’t control from the ground – you actually get in it.

It is about the size of a small car and has room for one passenger.

The Ehang 184 is an autonomous aerial vehicle which means you don’t control it in the air.

A flight plan would be set before take-off and the vehicle would then follow waypoints to your destination.

The only control the passenger has is take off and landing. In fact, it doesn’t even require professional pilot training to ride in it. 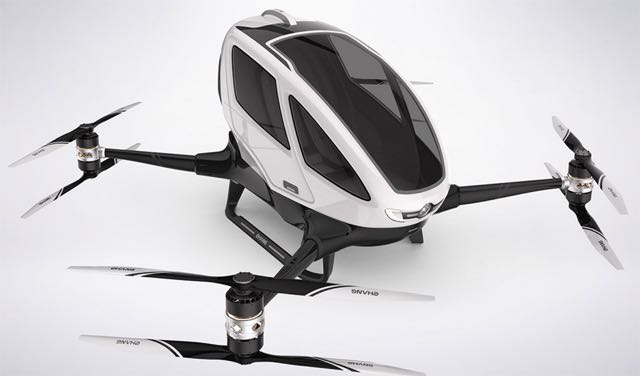 It flies at a low altitude for about 23 minutes – so it would have to be a short trip.

The Ehang 184 seats one passenger and has a small trunk to fit a bag. In total it can handle a payload of 100kg.

The smart gadgets that can improve your drinking, listening and driving