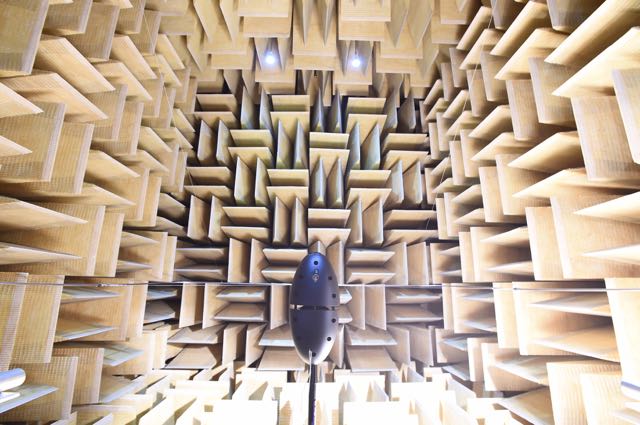 Samsung has announced its new wireless omni-directional multiroom speakers – the R5, R3 and R1 which will be seen for first time at the IFA tech trade show in Berlin but Tech Guide has already had a sneak preview.

We were given an early look – and listen – to the new Samsung speakers when we visited the company’s recently created audio labs in Valencia just outside Los Angeles.

Samsung’s decision to create these labs means the company is serious about audio and is looking to challenge the established audio brands in the marketplace.

The new cylindrical speakers, the latest in Samsung’s Wireless Audio 360 range, have a premium design and can fit anywhere in your home.

The R5, R3 and R1 have differing sizes and include an all-new tap and swipe interface for easy control of your music.

These new models follow on from the acclaimed R7 and R6 speakers and offer high quality and balanced audio that can fill the room.

A regular speaker behaves like a flashlight with the music reaching only certain targeted areas.

But the Samsung speakers are more like a light bulb and radiate sound evenly in all directions.

And it’s all thanks to the proprietary ring radiator technology which allows the audio to be heard evenly no matter where you walk in the room.

“With these additional models we are bringing a new kind of high quality sound to the market, with design that is simple, yet premium, and offers a more intuitive user interface,” said Jurack Chae, Senior Vice President of the Visual Display Business at Samsung Electronics.

“The R5, R3 and R1 will help cement Samsung’s position as a world leader in home audio.”

The updated Multiroom app for Android and iOS makes it even easier to share music across wi-fi connected.

The app will also work with the upcoming new Samsung Gear smartwatch to make it possible to control your music distribution from your wrist.

Tech Guide had an early preview of the latest R Series speakers during a tour of Samsung’s audio testing labs.

The labs are run by director Allan Devantier and houses only audio engineers and research scientists with more than 200 years of combined audio experience.

Located in Valencia, the Samsung audio labs mission statement is clear: achieve No 1 status in the audio business by ensuring world’s best sound by fostering best practices and through applied research, innovation and collaboration.

So Samsung means business and, after achieving No 1 market status in smartphones and TVs, it wants to add audio to that list as well.

These chambers have up to 18 highly-sensitive microphones and can capture more than 280 separate measurements in less than 10 minutes.

One of the purpose-built chambers is the world’s first to accurately measure sound from a soundbar or television speaker.

And with a 10 per cent attachment rate for soundbars from TV sales it’s a worthwhile exercise to ensure the highest possibly quality from the products with the aim of increasing that figure in the future.

Even the sound from Samsung TVs have been greatly improved.

We heard the 2014 TV up against the 2015 TV and the improvement in sound quality for the latest panel was like night and day.

And it is all the result of the audio testing at the Samsung lab in Valencia.

But one of the aims of the Samsung audio labs is to test their speakers against other leading brands.

These blind tests – which Tech Guide took part in – are designed to give listeners an opportunity to rate what they think are the best sounding speakers.

The speakers are behind a panel so you can’t see where the music is coming from and their positions are also switched between tests.

The goal is to reach a consensus about where the Samsung speakers rank among the competition.

And if the Samsung products are not ranking higher, then the engineers know they have work to do.

The testing is conducted in such a way as to eliminate the subjective bias. What sounds good to you might not sound good to me.

But the process of the blind testing achieves a level of consistency where testers eventually come to agree on a similar standard.

They turn opinions into fact and then know exactly where improvements need to be made.

Small design changes can potentially have a huge effect.

And that’s the name of the game for Samsung in this growing speaker market.

Samsung now has an audio lab that is just as good as any other lab from established audio brands so we can expect to hear the high quality results from now on.