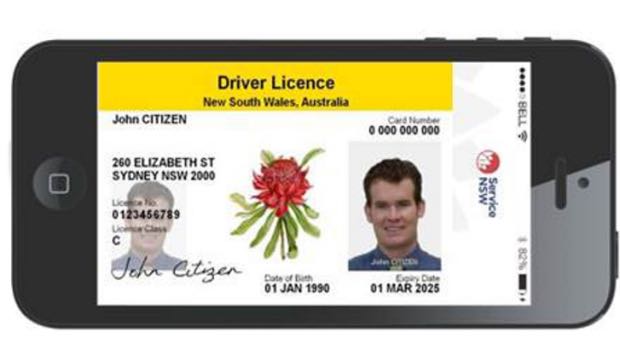 If you were pulled over by a police officer and didn’t have your driver’s licence would a photo of your license on your phone be acceptable and get you out of a fine.

With the move towards digital licences in some parts of Australia set to launch as soon as 2019, would this form of digital licence – a photo of your actual license on your smartphone – do the job?

The reason we have a licence is to display our personal information, our license number and expiry date.

And if an officer asks to see your licence, it is this information he or she is seeking.

Whether it’s the actual licence or a photograph of your license, the information can be seen in the same way.

It would also include your photograph to confirm the identity of the licence holder.

We understand there is a clear difference between a digital licence and a photo of your licence.

In the case of the photo, there is the possibility the image and information could be altered.

But going back to the scenario where a driver is pulled over by an officer, the information and the photograph can be checked and confirmed on the spot.

Any alterations would be detected immediately. It’s not like using a fake ID to enter a nightclub, the officer can check your information there and then whether you’ve got your real licence or just a photograph.

So, is a photograph of your licence as acceptable as the real thing?

We posed this question to a Police Highway Patrol officer.

“The law states a driver MUST carry their physical licence,” he says.

“But if someone had a photo of the front of their licence, I could use that to confirm their information.

“The question is whether the driver would be comfortable handing their unlocked phone to a police officer while he or she conducts a check.”

We’ve heard stories where officers have allowed drivers who were not carrying their licence to produce it within 24 hours to avoid a fine.

“I would never agree to someone producing their licence at a later time,” the officer says.

“The offence is committed at the time you are detected not carrying it.”

What about carrying a photo of your licence?

“Some would accept the photo licence but equally some wouldn’t out of principle,” he says.

“It’s simply a matter of discretion.

“I always consider what a magistrate’s attitude would be if they took the ticket to court.

“I think the magistrate would be pretty sympathetic to someone defending a matter saying they simply forgot their licence but had a digital copy on their phone that they were prepared to give the police officer.”

It won’t be long before your driver’s licence is simply another app on your phone. There will be a banner that will cycle between a six-digit security code and the issuing authority’s logo.

Obviously carrying your licence with you when you’re driving is the right thing to do but having a backup photograph on your phone can also be helpful.

We heard from some people who drive their car to the gym or to start a run and don’t want to carry their wallets.

For some of these, having a picture of their licence on their phone has got them out of a ticket.

It doesn’t always work. It depends on the officer’s discretion. But a picture of your licence is certainly better than not having your licence at all.