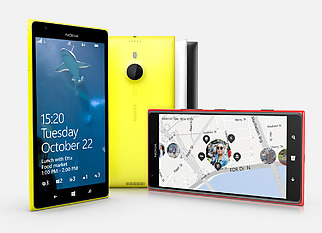 The term “bigger is better” certainly applies to Nokia’s new supersized Lumia 1520 which now sports a dazzling 6-inch screen and a 20 megapixel camera.

We’ve always viewed the Nokia Lumia range as the quiet achiever of the smartphone market with an always-improving portfolio of products.

The Lumia 1520 is a worthy follow-up but it has taken a “go big or go home” attitude.

We love that approach but there may be some users who will be turned off by the size of the device.

The first feature that’s going to strike you is the excellent 6-inch display which naturally has a full high definition display of 1920 x 1080 – that’s the same number of pixels on the 50-inch TV in your lounge room.

And like the tiles on previous Lumia devices, they can be easily resized and positioned depending on the apps the users open most often.

The 1520 adopts a similar design to the previous Lumia models with its subtle curved edges that merge with the glass screen on the front of the product.

On the back is the lens for the 20-megapixel camera which protrudes slightly from the back of the device but not far enough to make it too intrusive.

Along the side is a dedicated camera button as well so users can grip it like a real digital camera instead of trying to activate the shutter with the touch screen – although you can do that too.

The product is powered by a quad core 2.5Ghz Qualcomm Snapdragon 800 processor so it’s not going to keep you waiting when you ask it to open apps and access the many features onboard.

There’s also a generous 32GB of built-in memory along with a microSD card slot to expand by up to an extra 64GB.

The microSD Card slot can only be opened with the same tool that pops open the SIM card slot.

The SIM card we can understand being locked in this way but we found it frustrating that we had to look for the SIM tool every time we wanted to access the microSD card.

There’s also added storage when you throw in the SkyDrive so all up you’re not going to be left wanting in the capacity stakes.

And you’re going to be glad to have that amount of storage because you’ll want all your content with you to enjoy on that stunning large screen.

But another drawcard to the Lumia 1520 is that 20-megapixel camera. Nokia knows how to produce a decent smartphone – have done for years – and the 1520 follows capably in the same direction.

Apart from its high quality in good light, the Nokia Lumia 1520’s camera has improved focus and even more control with Pro Cam which allows users to adjust white balance, ISO and exposure on the fly.

And your images can also be arranged by time and location so they can tell their own story hence the reason why this feature is called Storyteller.

Another powerful feature is Microsoft Office on the 1520 which means users can access their documents and edit them on the fly as if they were in front of their computer.

The larger screen comes in to play beautifully here making it easier to view your documents including spreadsheets and presentations.

Documents can be accessed remotely from your SkyDrive and saved back there when your done and then opened on your computer later.

On the apps side the Windows Store has growing quite rapidly with nearly every popular app that you can find on iOS and Android also available for the Windows Phone platform.

The latest big addition is Instagram so the excuses for not having a Windows Phone are slowly running out.

On the battery side the Nokia Lumia 1520 lasted the entire day quite easily with average use.

Taking advantage of the other features like listening to music, watching movies, accessing and editing Office documents, browsing the web and taking pictures obviously taxed the battery even more but there was still enough in the tank to get us home.

The Nokia Lumia 1520 is a capable device that will suit a wide range of users thanks to its included apps and features for work or play.

But the roadblock for some will be the sheer size of the product thanks to its 6-inch screen.

Not everyone will buy into the need for a display this size – for these users Nokia has smaller devices.

But if you’re already within the Windows or Xbox Live ecosystem you’re actually going to feel right at home with the Nokia Lumia 1520.