The device enters a market that’s already packed with wearable devices like smartwatches, and fitness bands.

But Microsoft’s Band 2 is ambitiously trying to be all of those things in one with an impressive list of features and capabilities that combine to form a compelling product.

The device can track your heart rate, calories you burn and the quality of your sleep. 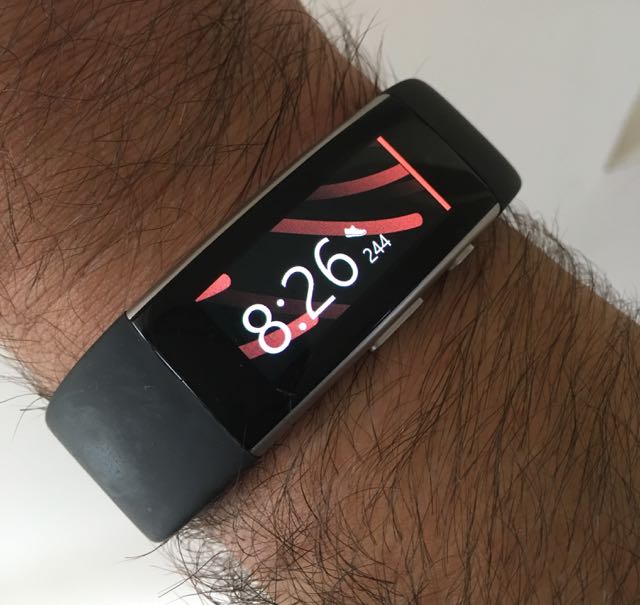 It can also be your personal trainer, your life coach and even your golf caddy.

The companion Microsoft Health app and online dashboard looks at all the data the device collects and provides insights on what’s working and not working for you.

The Microsoft Band 2 is thinner than the previous model but it’s still a little chunkier than regular fitness bands.

One of the reasons for that is the fact it has a curved Super AMOLED screen that’s 3.2cm wide on top of the band and a heart-rate sensor on the bottom.

It is made of thermal plastic elastomer silicone and has a clasp with a sliding mechanism to adjust it for a perfect fit.

On the clasp you’ll also find a UV sensor so the band can tell you when you should find some shade or slap on some sunscreen.

Speaking of sensors, there are actually 11 of them on the device – including the UV sensor, heart rate sensor, three-axisaccelerometer, GPS, ambient light sensor and a barometer. 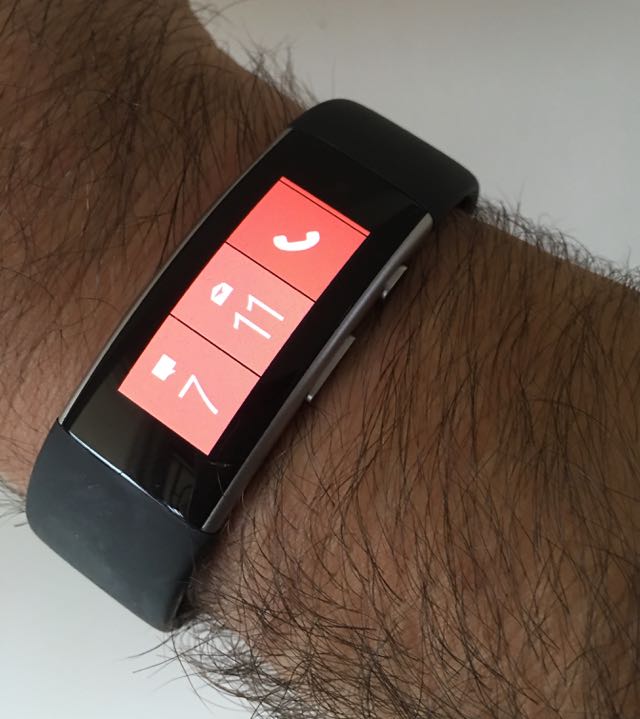 The screen is easy to read in bright sunlight and it’s also big enough for easy scrolling to the various tiles along the Start strip.

The default screen of the band is the clock so you can wear the Microsoft Band 2 as a watch.

We were disappointed to see the screen, which we assumed was made from scratch resistant material, was scratched within the first 24 hours we used it.

Either way, the heart rate sensor will work just the same.

On the fitness side, the Microsoft Band 2 is like your personal trainer. It’s counting steps and the calories you’re burning.

And when you go for a run, a walk, a bike ride or to the gym it can also keep tabs on your performance.

Where the Band stands out from its competitors is the fact there is GPS built into the device so even if you’re running without a paired smartphone it will map your journey and supply super accurate distances and average speeds.

Other devices can only do this when you’re carry your smartphone which provides the GPS connection.

Users can also follow guided workouts so the band actually becomes your personal trainer as well. It could be a gym workout, a park session or a run and the band will step you through the session. 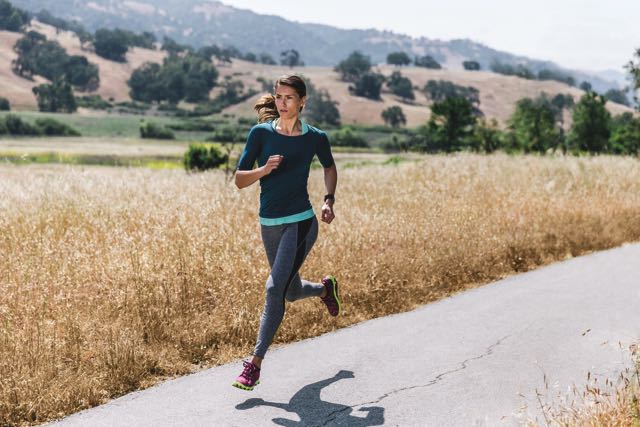 It will also be possible to browse and download workouts that are contributed from the Microsoft community.

The band can also be used with your favourite connected fitness apps like Strava, Runkeeper and MyFitnessPal.

And for those who like to listen to music while exercising, the band allows you to control the music you’re streaming from your mobile device.

But, unfortunately there is no memory onboard the band so can only stream music rather than listen to songs that are locally stored.

This would have made Microsoft Band 2 an even more standalone device.

The Microsoft Band 2 is not water proof so forget about taking it swimming or in to the shower. It can handle a splash in the rain or if you’re washing your hands but it can’t be submerged. 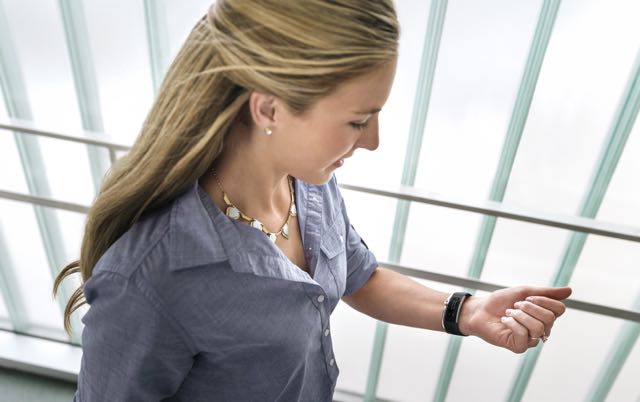 When it’s time to get some shut-eye, the band also provides some amazing insights like the amount of deep restful sleep you’ve had, your heart rate, time to fall asleep and even your sleep efficiency score.

Any medical professional will tell you the key to good health is a good night’s sleep.

With the band able to clearly show the user’s sleep patterns, it makes us conscious of ways we can improve. 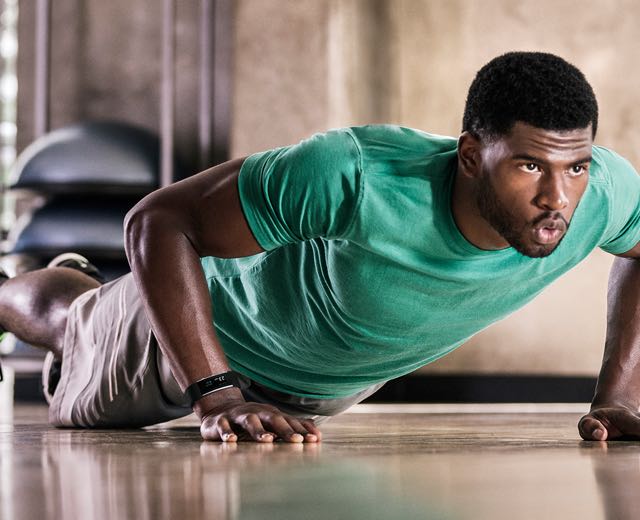 The band can actually guilt you into going to bed earlier.

The Microsoft Band 2 also has a discreet alarm that will vibrate to rouse you inside a 30-minute window of the time you designated from a state of lighter sleep so you’re not waking up feeling too groggy.

One of our favourite features of the Microsoft Band 2 is the ability to use it as your golf GPS device.

It can locate you on the course thanks to that built-in GPS and give you accurate distances to the hole.

But the best part is, the band can also count your strokes. The device’s sensor can detect when you strike the ball with your club on each hole and it can tally your score automatically without writing a single thing on your scorecard. 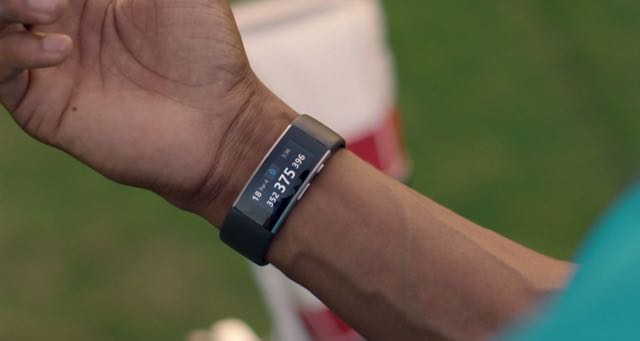 It won’t count practice swings – unless you hit the ground hard on the down swing.

You can also map each hole and see exactly where every shot landed so you can truly analyse your round.

This golf feature alone makes the Microsoft Band 2 a device worth buying.

The Microsoft Band 2 will pair via Bluetooth with Android smartphones, the iPhone and, naturally Windows Phone.

There are added features and benefits if you are a Windows Phone user like using Cortana – Microsoft’s version of Siri – to reply to messages, takes notes and set reminders with your voice.

But even with a paired iPhone or Android device you will still see your incoming calls, texts, emails and reminders along with other social media notifications.

For us we liked the fact that we felt a vibration on our wrist when a call was coming in. It prevented us missing a call with the phone in our back pocket.

Microsoft Band can’t run independent apps on the device but there is enough onboard to cover all of a users needs.

The Microsoft Band 2 is backed up by a solid app which makes it easy to track your progress on your smartphones.

The data is viewable in graphs so you can compare your efforts day to day or week by week.

It offers a wealth of information to give you a compete picture of where you’re at.

From the app you can also customise the band, change the colour of your start tiles and add a background pattern to the clock face.

The app was a bit flaky at times and took a few minutes to sync with the band.
And when trying to view different sections, our information wasn’t always immediately available to view. 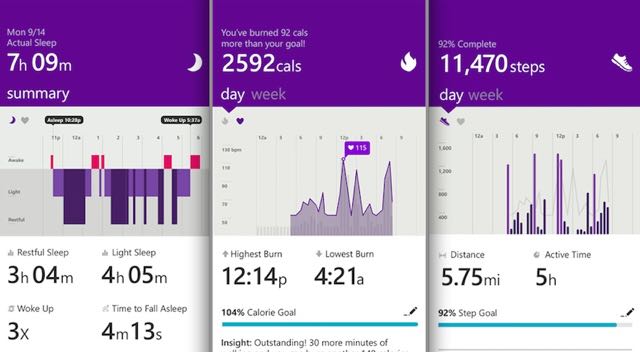 A couple of times we had to quit the app and start it up again. Hopefully a future app update will sort out these issues.

Your information is also available online on the Microsoft health site when you sign in with your Microsoft ID.

It’s here where you can see real analysis of your data in the Observations section and how your habits affect your health and exercise.

For example, the Band might point out that your running times after you get eight hours sleep.

The system is intelligent enough to see your data and behaviour and draw conclusions to establish if they are related.

The Microsoft Band 2 battery runs for about two days on average before you need to recharge it using a special USB cable that clips on to the underside of the clasp. Because the display only comes on when you press a button, there’s no unwanted screen usage when you move your arm like other devices.

Other factors like GPS usage and how many workouts you do will also have an effect but we found that even with consistent use we easily had two days of battery before we had to recharge.

The Microsoft Band 2 ticks all of the boxes for anyone who’s looking for a wearable device that can provide the features of a smartwatch and the benefits of an activity tracker.

It can help you get fit, live a healthier life and also stay connected and productive. It’s not cheap at $379.95 but when you consider you’re getting a smartwatch and a fitness device and more, the price is competitive with products with fewer features.