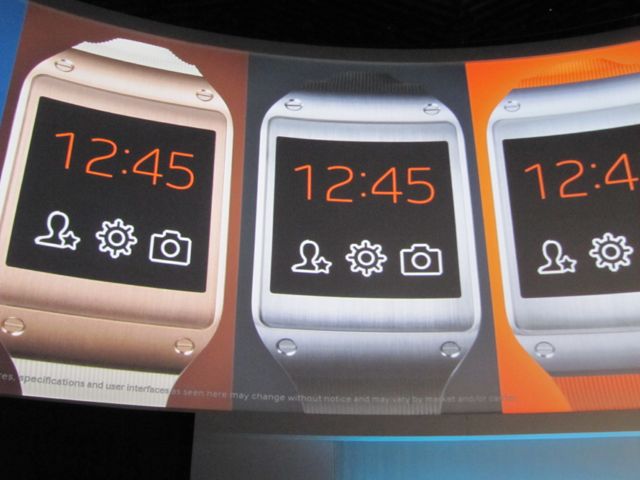 Samsung has unveiled of the Galaxy Gear – a stylish smartwatch that brings the experience of the company’s Galaxy devices to your wrist.

Introduced at the Samsung Unpacked event ahead of the IFA consumer tech tradeshow in Berlin, the wearable technology has a 1.63-inch Super AMOLED screen and will notify users of incoming messages, calls, emails and other alerts.

If users want to take that alert further they can simply reach for their attached Galaxy device and a feature called Smart Relay will automatically present that content on the larger screen.

Users can navigate the features of Galaxy Gear by swiping left and right on the screen. To return to the home page simply swipe down on the display.

Thanks to the built-in speaker onboard the Galaxy Gear users can make and receive hands-free calls Dick Tracy-style without having to interrupt what they are doing.

Now if you have your hands full – you can still make a call simply by using your voice.

To answer a call simply move your hand towards your ear.

The S Voice functionality also makes it possible for you to create messages, voice memos, emails, calendar entries and set alarms just by talking to the Galaxy Gear on your wrist.

Apps will also run on the Galaxy Gear smartwatch with many of your favourites already in development to run and fit and the device’s 1.63-inch screen.

Also on board Galaxy Gear is an outward facing 1.9-megapixel camera on the wrist band that can take stills and record videos to capture life’s daily events while on the move.

The Auto Lock feature can automatically lock the companion smartphone’s screen when separated by more than 1.5m and also unlock the device when they are together again.

Find My Device can also turn the Galaxy Gear into a tracker if you happen to misplace the companion smartphone. The smartwatch can make the missing device light up and make sounds to make it easier to find.

The Galaxy Gear can also control music playback on your smartphone from your wrist.

And because it can be easily worn everywhere you go, the Galaxy Gear can also act as a pedometer and track your daily movements and activities thanks to the built-in sensor.

Users can take this information and calculate calories burned, steps taken and the distance you’ve travelled.

Of course Galaxy Gear is also a standalone timepiece and has 10 different clock options with even more choices downloadable with a companion app.

The Samsung Galaxy Gear is available in a number of colours – Jet Black, Mocha Grey, Wild Orange, Oatmeal Beige, Rose Gold and Lime Green and will be released worldwide on September 25.