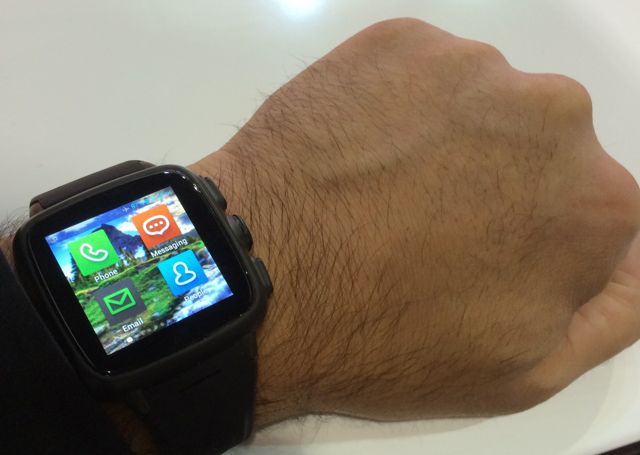 Omate is not just a smartwatch – it’s a mini smartphone

We’ve all heard of smartwatches that link to your phone but Omate is a device that’s not just a smartwatch but it’s a phone as well.

The Omate True Smart doesn’t need to link to a smartphone like all of the other smartwatches on the market.

It is a standalone device that works independently of any other product – it’s a smartphone that you wear on your wrist like a watch.

Tech Guide got its hands on the Omate True Smart at the International Consumer Electronics Show in Las Vegas.

The device has a 1.54-inch multitouch ultrasensitive sapphire curved glass screen and is powered by a dual core Cortex A7 1.3Ghz processor.

Originally offered for support on the Kickstarter site, Omate True Smart has its own Omate user interface that’s running on top of the Android Jelly Bean 4.2.2 operating system.

Omate also has its own app store called the Ostore that will be offering apps designed specifically for the watch.

The device has its own micro SIM card slot on the left side of the watch and works on 2G and 3G networks.

Also on board is a compass, gyroscope, wi-fi, Bluetooth and a 600mAh battery that can run the watch for the entire day.

There are two versions of the Omate with either 512MB or 1GB of internal memory and it also has a microSD card slot to increase the capacity to up to 32GB.

Omate has an IP67 rating which means it is waterproof to a depth of 1m for up to 30 minutes.

There are two navigation buttons on the right side along with an embedded 5-magapixel camera.

When making and receiving calls, Omate allows users to talk into the watch and hear the caller right there in their wrist.

Users also have the option of pairing a Bluetooth headset if they’d prefer to have their conversation in private.

Omate responds to voice commands and also makes it possible for messages, emails, calendar appointments and social media updates to be spoken rather than typed.

It’s also possible to browse the web on the tiny screen and even use the keyboard with Swype typing that is like joining the letters rather than tapping each key.

This method makes it more accurate to type on a keyboard of this size.

Of course there are many apps that just wouldn’t be practical to use on a 1.54-inch screen like games and other apps that are built for larger screens.

But most text and image based apps like social media apps are still suitable.

The Omate True Smart is available to order now here and is priced from $249.

GolfBuddy WT3 GPS watch gets you closer to the pin

Garmin Dash Cam can be your eyewitness on the road