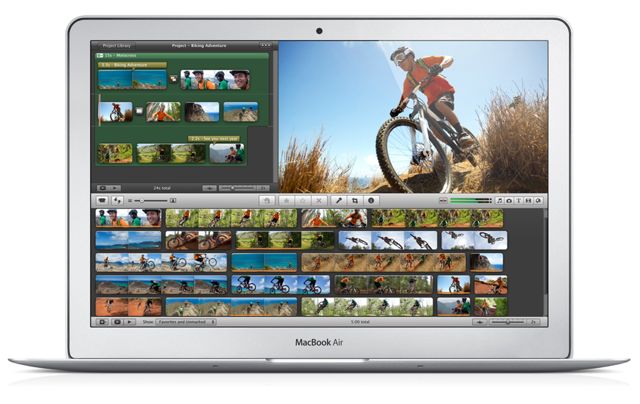 Apple’s MacBook Air is the laptop that started the Ultrabook revolution and remains the benchmark in this category after the company released its best update yet.

The latest 13-inch version has been improved across the board with the latest features including all-day battery, new Intel processors and the latest 802.11ac wi-fi.

Design-wise the MacBook Air has hardly been altered from the iconic form factor that was presented to the world for the first time by Steve Jobs at Macworld 2008 when he pulled it out of an envelope.

Yet there has still been quite a significant change under the hood that makes the MacBook Air an ideal choice for user who wants the power of a laptop without being weighed down by a bulky device.

The 13-inch MacBook Air’s dimensions are impressive – just 1.7cm at its thickest point and tapering down to just 3mm. It tips the scales at 1.35kg. The 11-inch version is even lighter at 1.08kg.

And despite being so slender it is still strong and durable thanks to its precision unibody design.

Down the left side are the MagSafe 2 charging connection, a USB 3.0 port, headphone jack and dual microphones with noise cancellation.

On the right side users will find a Thunderbolt port for high-speed data transfer, another USB 3.0 and an SD card slot.

What makes the MacBook Air so light and thin is the fact it uses SSD (solid state drive) rather than a traditional hard drive which is slower and bulkier.

And there is also no optical drive onboard the MacBook Air which also helps it maintain its svelte looks.

Open the lid and users will see a stunning 13.3-inch LED backlit glossy display with a resolution of 1440 x 900.

There’s also a fullsize keyboard that also has a built-in ambient light sensor that not automatically adjusts the screen brightness but also activates the backlight under the keys.

The trackpad is also a generous size and for a good reason. That reason is that it supports multi-touch gestures to offer iPad and iPhone interaction like pinching, zooming and panning on the MacBook Air.

Not only is it easy to navigate the whole screen but the whole trackpad is also a button so there’s no frustration in trying to find a left and right button as we’ve experienced with other laptops.

The MacBook Air was one of the first devices to run the Intel fourth generation Core i5 or i7 processors and they deliver efficiencies that extend battery life as well as increasing performance at the same time.

On the performance side the MacBook Air has seen a significant boost which can be put down to not only the faster processor but also the next-generation flash storage onboard that’s nearly twice as fast as the flash used in the previous model.

The device, which runs the excellent OS X operating system, starts up in seconds and, with up to 8GB RAM available, can run all of your processor heavy applications quickly and smoothly.

People yet to use the MacBook Air make the mistake of assuming a device that’s so thin and light can’t deliver high performance and power.

The MacBook Air proves that theory is completely wrong.

Another area that has been speed bumped is the wi-fi connectivity with the latest 802.11ac wireless standard that is up to three times faster than regular wi-fi.

When linked to an 802.11ac router – like Apple’s very own Airport Time Capsule, Airport Extreme and other 802.11ac routers – the connection is noticeably faster.

Battery life has also been boosted substantially thanks to the new Intel processor’s power-efficient architecture.

And what that means for users is literally all-day use. This is great news for users who are on the go and need to use their computer throughout the day.

Apple has stated the battery life for the 13-inch is up to 12 hours but with our testing with average to heavy use we managed about 10 and a half hours before we needed to reach for the charger which was still quite impressive.

After a full charge in the morning, the MacBook Air powered through the day and still had a fair bit of juice left to allow is to continue to use the device well after the work day was over.

There’s not much to fault with the MacBook Air.

There are a number of Ultrabooks on the market – mainly Windows 8 devices – which are now sporting toiuchscreen displays.

Some may see the absence of a touchscreen on the MacBook Air as a drawback but, frankly, we don’t see the need to have one.

The trackpad provides enough interaction to replicate touchscreen-like actions so all a touchscreen would have added to the MacBook Air is cost.

The MacBook Air has set a new benchmark for design, speed and performance.

Not only it is light and with razor-thin looks, it offers the power and features that even power users will appreciate.

If you’re looking for a light and thin laptop that runs smoothly and efficiently and with a battery to easily get you through a whole day – it’s hard to look past Apple’s MacBook Air.