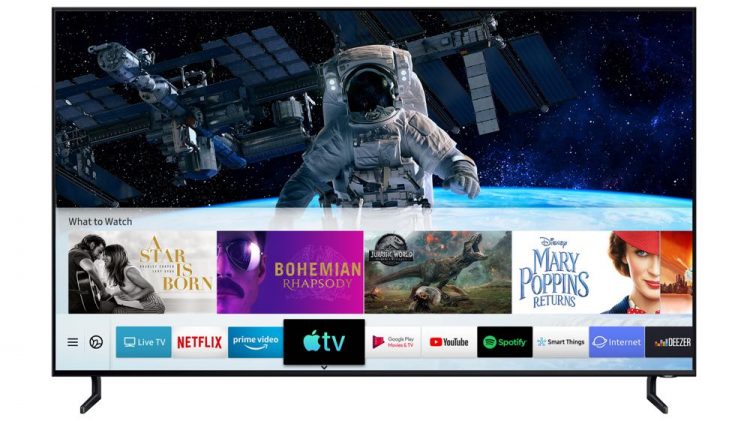 Samsung has become the first TV manufacturer to launch Apple TV and AirPlay 2 on its 2019 smart TVs and select 2018 models so viewers can access their iTunes movies and TV show purchases.

The new feature will be available to the Samsung TVs after a firmware update.

Once the compatible TVs are updated, the Apple TV app will be installed to give viewers access to more than 100,000 iTunes movies and TV shows including 4K HDR titles to utilise the 4K resolution of the Samsung TVs.

Customers will also be access the numerous channels available within the Apple TV app including NBA, MLB and Optus Sport and pay for the ones they want to watch on demand.

Samsung TV owners will also be able to view the upcoming Apple TV+ video subscription service on their TV when it is launched later this year.

AirPlay 2-enabled Samsung TVs will also now be able to play videos and other content from Apple devices including iPhone, iPad and Mac computers directly to the television.

“For the last decade, Samsung has been at the forefront of offering the broadest selection of content available to consumers on our Smart TV platform.” said Won-Jin Lee, Executive Vice President, Visual Display Business at Samsung Electronics.

“As the first TV manufacturer to integrate the Apple TV app on a Smart TV platform, Samsung continues to offer our customers incredible value and access to the Apple TV app experience on the largest screens available today.”

Apple TV and AirPlay 2 will be available on the following 2018 and 2019 Samsung TV models after a firmware update:

Telstra Plus rewards program kicks off – see what customers can earn

Listen up! Get Episode 348 of the top-rating Tech Guide podcast in your ears