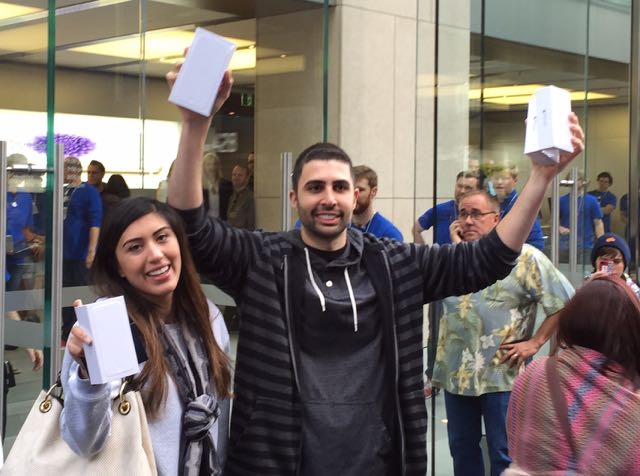 Australian customers became the first in the world to get their hands on Apple’s new iPhone 6 and iPhone 6 Plus when they went on sale today.

The line of customers, some who had been lining up for more than a week, snaked around two blocks behind the Sydney Apple Store in George St.

By the time the doors of the store swung open at 8am there would have been more than 1,000 people waiting in line.

Because of the time difference, Sydney, Melbourne and Brisbane were the first cities in the world to offer the new larger screen devices to customers who were clapping and cheering as they entered the store.

By all indications, this year’s Apple launch is one of the biggest in recent years and proves the company still has massive pulling power whenever it releases a new product.

It was only yesterday that Sony announced they would be posting a $2bn loss for year.

The first customer through the door was Dave Rahimi all the way from California who purchased two iPhone 6 Plus devices.

There were also lengthy lines at the Bondi Store and other suburban stores in Sydney as well as in Brisbane and Melbourne.

The apparent extra demand for Apple new iPhones is largely due to the fact the company has opted for larger screen – 4.7-inch and 5.5-inch.

This places the iPhone 6 and iPhone 6 Plus squarely in the same size brackets as many popular Android smartphones.