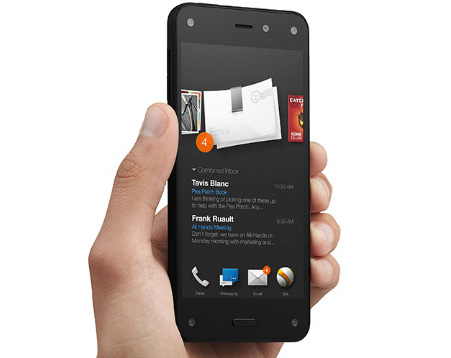 Amazon has entered the smartphone arena after unveiling the new Fire Phone which is being positioned to take on market leaders Samsung and Apple.

Jeff Bezos, Amazon’s CEO, revealed the Fire Phone at an event in Seattle and demonstrated the device’s new features.

These include Dynamic Perspective, Firefly and an advanced camera system.

Onboard the new device is Dynamic Perspective – a new feature that utilises a camera sensor system that responds to the way and the angle you hold the device.

The sensors track the user’s head and allow them to look around the image and around corners and obstacles on the screen.

Another benefit of this feature is hands-free scrolling so you can access menus and shortcuts simply by tilting and swivelling the device.

It’s also possible to scroll automatically on long web pages and ebooks without touching the screen.

Firefly is another new technology aboard the Fire Phone that makes it easy to identify printed text in magazines, business cards like phone numbers and web addresses to make calls and visits web sites without having to type out the number or long web addresses.

The Firefly technology can also be used to recognise movies and TV shows and reveal information about actors, plot details and related content.

It can also do the same thing with music and link directly to the Amazon store for direct download to the Fire Phone.

The camera also has a dedicated capture button on the side of the device so you’ll never miss a moment.

Customers will also receive free unlimited cloud storage of their images captured with the Fire Phone.

The Fire operating system 3.5.0 sits above the Android software to provide a customised smartphone experience that will still allow users to get work done on the move as well as download and use apps.

Amazon is best known for its Kindle ereaders and its online store.