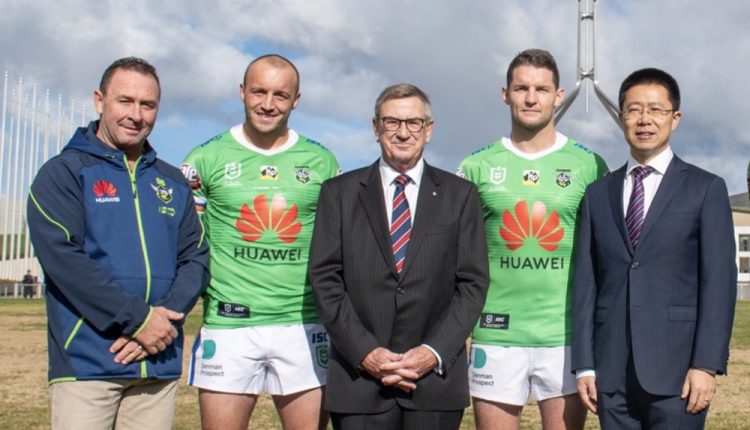 Huawei has been forced to end its decade-long major sponsorship of the Canberra Raiders rugby league team after the company’s revenue took a major hit in 2020 on the back of the COVID-19 pandemic, its 5G ban in Australia and US trade black ban.

Huawei says the sponsorship was being terminated after continued negative business environment was having a larger-than-expected impact on the company’s planned revenue stream.

The sponsorship of the Canberra Raiders was Huawei’s first ever major sporting sponsorship in the world.

“We are very proud of our major sponsorship of the Raiders and the fact that it lasted for almost ten years shows how successful the partnership has been,” says Jeremy Mitchell, chief corporate affairs officer, Huawei Australia.

“It is so disappointing that it has ended this way but are very proud of the small role we have played in this great NRL club.

“Our near decade as major sponsor of the Raiders has been one of the most successful in Australian sport and we are very sad that it has come to an end.

“Even after the Turnbull government banned us from 5G we managed to find the resources to continue the sponsorship but we just can’t financially support it any longer.

But the company won’t be lost to the NRL club with Huawei agreeing to relocate its logo on the back of the Raiders jersey.

“Huawei’s commitment to the Raiders has been unwavering and we have worked together to achieve so much for the Raiders family, Rugby League itself and the broader community with our charity work.

“This relationship has been about so much more than just a logo on a jersey, we have worked with Huawei on a number of very important community initiatives and fundraising opportunities for very worthwhile causes.

Ricky Stuart, Canberra Raiders head coach said: “While some people talk about having strong partnerships, they don’t mean very much until you go through bad times together and back each other up.

“We at the Raiders supported Huawei Australia through a difficult period and Huawei supported us through a very difficult time as well.

“Huawei and the Raiders went well beyond simply being a commercial arrangement, we forged a very strong relationship that became very personal and it is one which we will always be grateful for.”