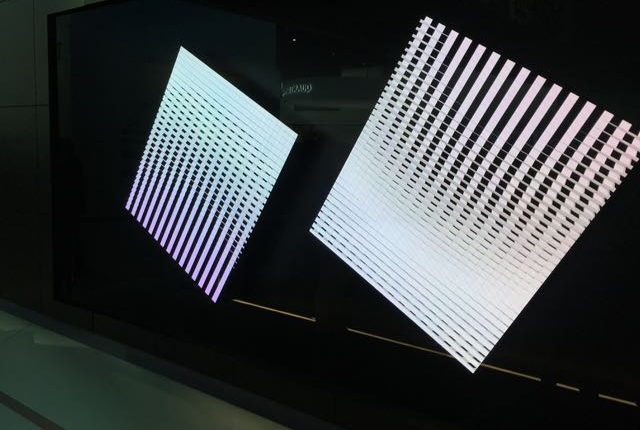 How Samsung is changing the shape and size of televisions

Samsung range of new TVs at the Consumer Electronics Show in Las Vegas were impressive but the real showstoppers were the world’s largest Ultra High Definition TV and the TV that can transform to suit your content’s aspect ratio.

CES is the biggest tech trade show in the world and is used to showcase a company’s latest concept products.

In Samsung’s case the 170-inch SUHD TV – that’s 4.3m – was on display for the first time and will be available to purchase – if you have enough money that is.

Our guess is the monstrous television will be well over $150,000 – but that has yet to be determined.

But the interesting thing about this gigantic screen is that it isn’t one TV – it is several TVs that have been stripped of their bezels and linked together.

And even standing up close to the TV you can’t see the joins in the panels which was remarkable.

Samsung’s transformable TV uses a similar technology that was seen with the larger TV.

In this case, the Samsung takes two rectangular panels and joins them together.

The reasoning behind the transformable TV is having a screen that can adapt to the aspect ratio of the content it is displaying.

Today’s TV’s have a 16:9 shape so when watching a movie with an aspect ratio of 1.85:1 the images fills the entire screen.

But when you’re watching a movie with an aspect ratio of 2.35:1 you’ll notice there are black bars at the top and bottom of the screen.

If that bothers you then you need Samsung’s transformable TV which can detect the aspect ratio of the content you’re viewing and change to fill the screen.

It does this by separating in the middle and rotating to the wider or narrower edge (depending on the aspect ratio) and then rejoining seamlessly so your content fills the entire screen.

This is a concept product at this stage and Samsung has made no announcement if or when it will be available to customers.