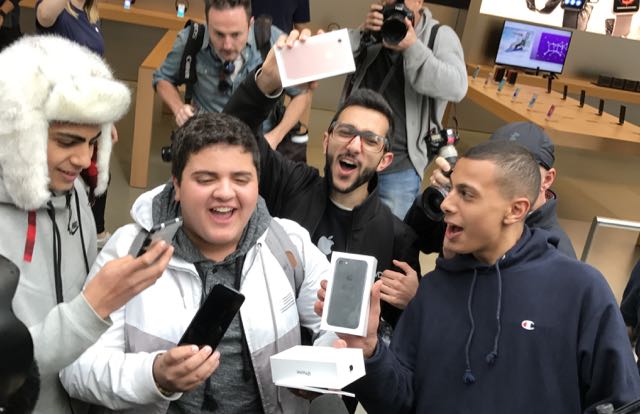 The iPhone 7 and iPhone 7 Plus went on sale across Australia today, one of the first places on earth where eager customer could get their hands on the eagerly-awaited device.

At Apple’s flagship Sydney store in George St the line of waiting customers snaked around to the next block.

The people at the very front of the line starting queuing three days earlier and had to endure a downpour early this morning before the doors of the store swung open at precisely 8am.

And with the time difference, Australians were able to purchase the iPhone 7 and iPhone 7 Plus hours ahead of the US customers.

A quick poll of the customers waiting in line showed jet black and black, the new iPhone 7 colours, were by far the most popular.

Most of the customers in the line that Tech Guide spoke to were also opting for the larger iPhone 7 Plus to take advantage of the dual lens camera.

But they were told iPhone 7 Plus stock in black and jet black at the Apple Store was sold out even before the doors opened.

Customers can check online for stock levels at the Apple website and reserve their model for an in store pick up each day.

The first customers through the door were students incuding Mazen Kourouche who won a scholarship to attend Apple’s Worldwide Developers Conference in San Francisco in June.

Kourouche, 19, has developed an app called Medic which can locate your nearest medical centre no matter where you are in the world.

“I’m always trying to keep up with the new technology that Apple is releasing,” he told Tech Guide today.

“People thought we were crazy waiting in line. We set up a tent to keep out of the rain.

“I’ve only had a short nap since Wednesday. And I won’t be doing much sleeping today – I have an assignment due this afternoon.”

Along George St in Sydney where the Apple Store is located, the telco stores – Telstra, Vodafone and Optus – also had crowds of their own with customers also queuing through the night.