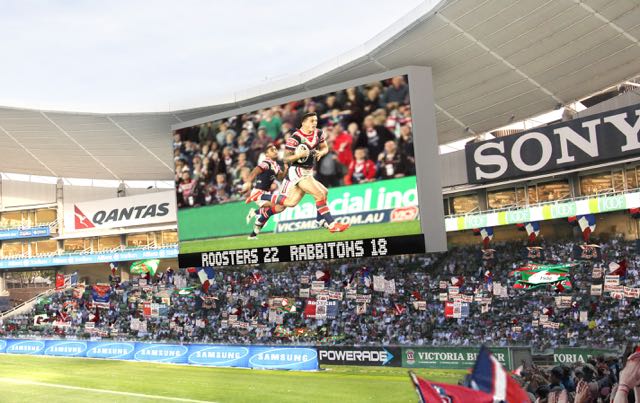 Allianz Stadium will next year unveil $20m of cutting-edge technology that will include the largest video screens ever seen at a rugby league, union or soccer match in Australia.

The ultra wide screens are 27m wide and 10m high with an aspect ratio of 24:9 and are five times larger than the screens they’re replacing.

They’re also larger than the screens at iconic sporting grounds Wembley and Twickenham.

They will be activated for the start of the 2015 NRL season, the initial rounds Super Rugby and the A-League finals.

The Allianz super screens will be switched on for the first time on March 15, 2015 for the Sydney FC v Brisbane Roar match along with free high-speed wi-fi and a 1200-screen IPTV network.

NSW Waratahs fans will be able to experience the new super screens and technology on March 22 with Super Rugby champions take on the ACT Brumbies.

NRL fans get their first look at the new 270 square metre high definition screen the next on March 23 when the Sydney Roosters host the Penrith Panthers.

At that match fans will also be able to try mobile food and drink ordering.

“Our end goal here is to give Sydney’s sports fans an unmatched experience right now – not several years and many millions of dollars away,” said Sydney Cricket Ground and Sports Ground Trust CEO Jamie Barkley 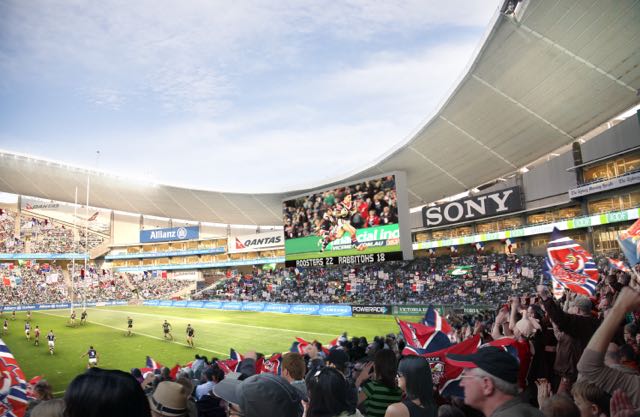 “By the time the NRL season starts, you’ll be able to order food and drink from your seat, keep up with the action on an IPTV screen anywhere in the venue and experience the biggest video boards of any rectangular stadium in Australia.”

The super screens were manufactured by Daktronics and are made of 13mm LED modules and will have more than 1.6 million pixels.

They will be linked to LED ribbon boards around the upper seating bowl.

“Daktronics is honoured to have once again partnered with the Sydney Cricket and Sports Ground Trust,” Mr Robertson said.