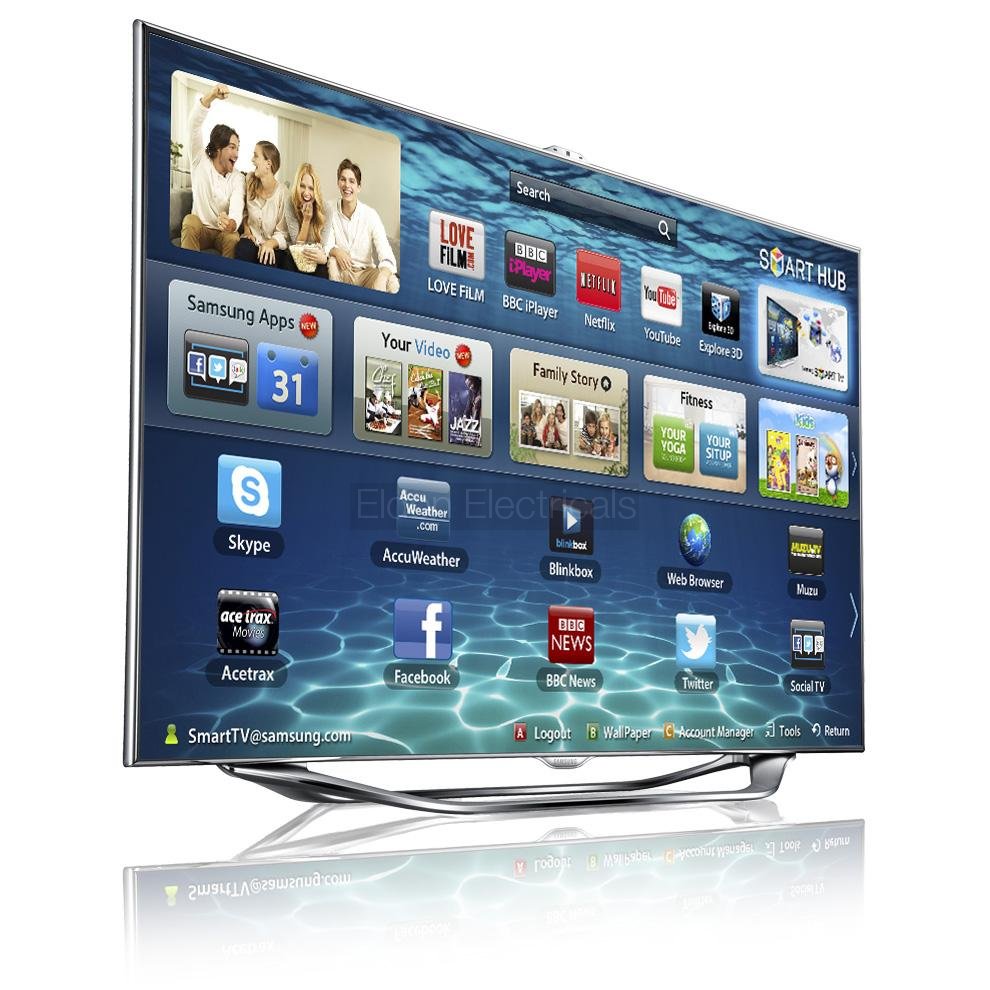 The new Samsung Series 8 LED ES8000 Smart TV has taken viewing to the next level with excellent picture quality, voice and gesture control and access to online content and services.

And not only can you enjoy your favourite shows, movies and sport on the panel itself it can also provide a second screen to smartphones and tables.

Where can I buy the Samsung LED Series 8 Smart TV online?

No longer is the flat screen just a glorified monitor but rather an intelligent, intuitive and interactive device that now boasts the same level of connectivity as the computers in your home.

Even before we turned on the 55-inch Samsung ES8000 Smart TV we were impressed by the look of the LED panel.

It has a thin bezel that’s hardly noticeable when the TV is turned on while the screen rests on a sculpted U-shaped stand.

There are also a couple of nodules on the top and bottom edges of frame. The one on the bottom has the Samsung logo and a light that comes on when the TV is turned on.

And on the top edge is a camera and microphone so the ES8000 can see and hear you – but more about that later.

Overall, the look of the TV fits in nicely with the modern home and is a sharp addition to any décor.

Regardless of all the added bells and whistles, the main thing people look for in a TV is picture quality. It is the number one feature they look for and Samsung has delivered in spades with the ES8000.

And it’s all thanks to the Ultra Clear Panel and Micro Dimming technology.

By doing this the panel maintains natural colours and picture clarity.

Micro Dimming also comes into play to help with the contrast and black levels on the screen. It uses real-time scanning technology to lighten and darken the screen as necessary.

Deep black levels, once only achievable with a plasma, are as good as we’ve seen on any other TV.

Even fast motion was easily handled so watching things like sport and action movies didn’t ever trouble the ES8000.

Under the hood of the TV is a dual core processor which powers not only these picture enhancing technologies but also the operation of the whole TV because it has more common with your computer than any of your old TVs.

The ES8000 is also 3D compatible and the amazing picture quality carries over in this mode as well when watching 3D content on Blu-ray.

Now we all know the traditional way we’ve interacted with a TV is with a remote control.

That all changed when we had the ES8000 installed for Tech Guide’s review.

Set up took a little longer than usual because we had to connect to our wi-fi network and also to have our face scanned.

By taking a picture of our face and saving it, it enabled the screen to incorporate facial recognition.

Now when each person sits in front of the TV it will recognise the user and load that particular person’s Samsung account and the relevant accounts for making Skype videos calls on the TV and for using Facebook.

But the camera is also useful for gestures while the built-in microphone can also hear your commands as well.

Now instead of reaching for the remote we simply held out our flat palm to the TV and the channel and volume controls appeared on the screen.

Now our hand became the mouse and the arrow on the screen now moved to match our hand movements.

Hover over to the up or down controls and simply by making a fist with your hand is like the performing the mouse click. This took hardly any time to get used to and is not designed for prolonged use otherwise your arm would get tired.

This was also useful for browsing web pages and clicking links and navigating the Smart Hub and apps.

But it was the voice control that really impressed us.

The TV can be turned off, on, switched to another source, adjust the volume and channel, launch the web browser and all activated with our voice.

Our trigger words were “Hi TV” so we had to say this to the TV to bring up the menu from the bottom of the screen.

All of the voice commands at your disposal are now listed in speech bubbles across the bottom of the screen.

One option – “More Commands” takes viewers to another screen where they can access Skype, Smart Hub, Apps, and My Mirror which turns on the camera so you can see yourself.

The voice commands didn’t always work right away and sometimes it took two or three “Hi TVs” to get the menu up on the screen.

When it did the sound would fade out to allow the TV to hear your command. And when it did it took a few seconds for the sound to return when you finished.

It is quicker to do all of this with the remote – but it’s nowhere near as much fun.

Oddly there were a couple of occasions when the TV turned itself on. We initially blamed our cockatiel but then realised he can’t talk.

The Voice and Gesture controls are not perfect. Sometimes the TV couldn’t hear us and sometimes the camera couldn’t see us especially if were watching the TV in the dark.

We learned there needs to be a good amount of light for the camera to pick up our hand movements.

But there were times when we could use our voice instead to do things like exit pages and go back to watching TV.

There are two remotes – one regular remote and also a smart remote which its has its own microphone if you don’t want to yell across the room. It also has a trackpad like the one on your laptop so you can also navigate a little faster and with slightly more accuracy.

Voice and Gesture are a fun addition that get easier and more reliable the more often you use them.

There are also built-in services like Fitness – a free on-demand training program and Kids – which has content for children that is both entertaining and educational.

AllShare also extends to SmartView using a dedicated app which can be downloaded on the Samsung Galaxy S II and Galaxy Tab 10.1.

This allows users to watch the same channel or a different source anywhere else on your home network.

Handy if someone else is watching a program and you wanted to catch another – now you can from the same TV on your smartphone or tablet.

This app also turns the smartphone and tablet into a full remote control.

When ee saw this feature running on a Samsung Galaxy S II streaming from the Es8000 it was hard not to be impressed.

The Samsung Series 8 ES8000 has redefined the meaning of smart TV.

The TV retains its strengths like picture quality and design and supplements them with additional features like voice, gesture and content which makes this a package that’s difficult to resist.

This TV is also upgradable by purchasing a module that goes into a panel on the back of the panel for about $150 so customers can rest assured their TV will always be the latest for a few years to come.

Samsung’s ES8000 is the most advanced TV we’ve ever used and is leading the way for other TV manufacturers to follow.